Grizzlies fall back to .500 in their first extra-inning game of 2017 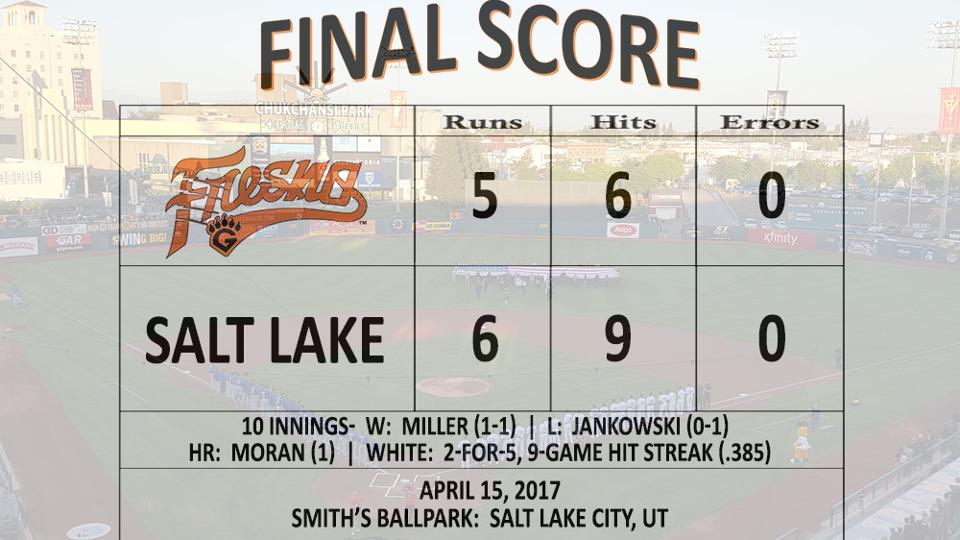 A back and forth affair Saturday evening resulted in the first extra-inning game of 2017 for the Fresno Grizzlies (5-5). Unfortunately the fifth and final lead change of the night came in the bottom of the 10th, when the Salt Lake Bees (4-6) took the series opener at Smith's Ballpark by a 6-5 final on a bases loaded walk.

Despite the setback, Tyler White (2-for-5) extended his club-best hit streak to nine games with his fifth multi-hit game of the season already. White is batting .385 (15-for-39) during the streak. Tony Kemp's eight-game hit streak was snapped.

The Grizzlies kept their streak of scoring at least two runs in the second inning alive for the fourth consecutive night, on a Teoscar Hernandez two-run blast to center. A.J. Reed was on base following a leadoff walk, before Hernandez's club-leading third home run. Fresno has now scored 14 times in the second over the last four games, and it's their best inning overall through 10 games (15 runs scored).

Trailing 2-0 in the third, the homestanding Bees struck back with a three-run inning, going ahead 3-2 on a two-run single to left by Matt Williams, and a RBI double to the same field by Shane Robinson (2-for-4).

Bees' starter Alex Blackford, a former teammate of Grizzlies Andrew Aplin and Brady Rodgers at Arizona State, made his Triple-A debut. He threw six innings in his second start of the season after being moved up from Double-A Mobile, and both runs were earned on three hits and four walks; Blackford struck out four as well.

Blackford left as the pitcher of record, but trailing 3-2 in the top of the seventh, the Grizzlies took him out of the decision. Hernandez and Reid Brignac each scored after working walks off reliever Jose Valdez, coming home on Preston Tucker's opposite field double to left off the wall as Fresno pulled in front 4-3. Tucker has now hit in six consecutive games.

Grizzlies' reliever Kevin Comer fired a scoreless fifth and sixth; despite just 10 appearances for Double-A Corpus Christi between 2016 and 2017, Comer has breezed through his first two Triple-A appearances: 4 IP, 0 R, 1 H, 1 BB, 5 K. The lead changed hands for the fourth time on the night bottom 7 however off reliever Ashur Tolliver, when Sherman Johnson's two-run double into the left field corner gave the Bees their second lead, 5-4.

That lead too was short lived, as Colin Moran led off the ninth by drilling a solo homer to right, his first longball of 2017 to tie the game 5-5. Closer James Hoyt kept that score with two strikeouts in the bottom half; Hoyt now has seven strikeouts in four innings so far this season, and has stuck out two batters in three of his four appearances (all one IP).

Jordan Jankowski (0-1) ran into trouble in the 10th however, loading the bases on a single and a pair of walks. His third walk of the inning to Ryan LaMarre ended the game in a 6-5 Bees win. The 12 total walks issued by the Fresno pitching staff was a young season-high by three. Despite blowing the save, Salt Lake reliever Justin Miller picked up the win (1-1) by tossing the 10th.