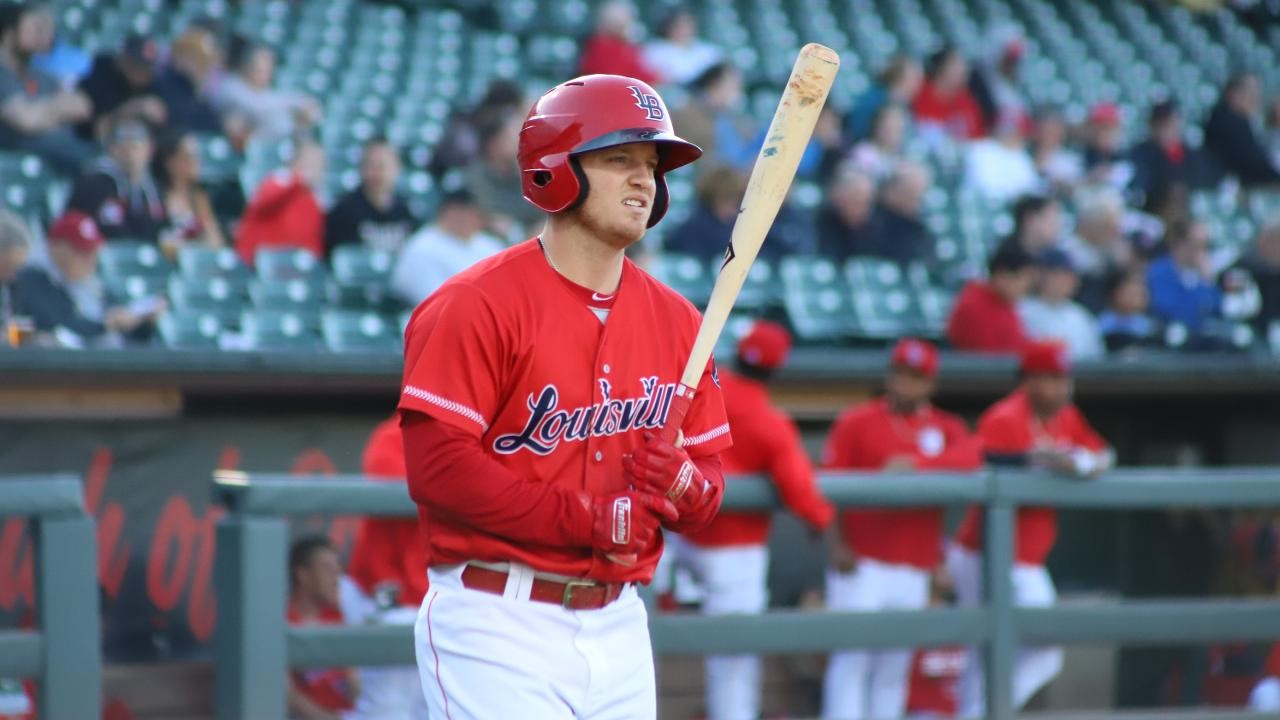 Josh VanMeter didn't have a multi-homer game in his career prior to this season. He has three this month. (Taris Smith/Louisville Bats)

The Cincinnati infield prospect belted a grand slam, a three-run shot and a solo blast in Triple-A Louisville's 15-4 rout of Toledo on Monday. The prodigious night -- the first of VanMeter's career -- upped his International League-leading total to 11 in 25 games.

"To sit here and think about that, that's really crazy," VanMeter said. "People have been asking me, 'What's the big change? What is it this year? Have you put on a lot of muscle?'"

The 24-year-old skied a three-run blast to right field in the second inning off southpaw Nick Ramirez and pulverized a 3-2 pitch by left-hander Matt Hall to right in the fifth for a grand slam. After top Reds prospect Nick Senzel, VanMeter's roommate and one of his best friends, delivered his first long ball of the season in the ninth off Hall, VanMeter promptly capped his milestone with a solo shot to right against the lefty. He also singled to right in the first and walked and scored in the eighth.

VanMeter has left the yard six times in his past five games, raising his average to .363. He took over the IL lead in RBIs with 28 and also tops the circuit in slugging percentage with .783 and OPS with 1.236. In 128 games last year between Louisville and Double-A Pensacola, the 2013 fifth-round pick had 12 home runs.

Simply, VanMeter credits his sizzling start to "not missing pitches to hit in the zone and taking advantage of mistakes." But he's also changed his entire approach at the plate, trying to improve his launch angle and drive balls in the air instead of hitting them on the ground.

The 2013 fifth-round pick recorded his career high for taters in a season in 2016 with the Padres organization, parking 14 combined homers with Double-A San Antonio and Class A Advanced Lake Elsinore.

Adjustments the 5-foot-11 left-handed hitter began to implement back in 2016 with hitting coach Johnny Washington -- now handling those chores for San Diego's big league club -- are starting to pay some serious dividends.

"I was super-steep in the zone and hit a lot of ground balls," VanMeter said. "And he kind of planted the seed, like, 'Look man, you're going to have to make some changes if you want to be really good at the upper levels of the Minor Leagues.' It's been a work in progress ever since then."

Since then, the Indiana native's made an effort to get the most efficient swing he can. He also credited two new hires within the organization, Reds assistant hitting coach Donnie Ecker on the Major League side and roving instructor Cody Atkinson on the Minor League side, with helping him achieve his power surge.

VanMeter said he studies a lot of video on great swings, past and present, to help his own developing bat. His favorite swing of all time belongs to Barry Bonds, but he also admires the cuts of current big leaguers Cody Bellinger and Michael Conforto. Meanwhile, he looks at his own numbers and can't believe he's the one putting them up.

"I'm kind of at a loss for words, as are other people," he said. "How does a guy go from hitting 12 home runs to 11 in three-and-a-half weeks? That's a good question. I don't think I have the answer either."

Senzel, MLB.com's No. 5 overall prospect, finished the game 3-for-6 with four runs scored and two RBIs. He has hit safely in all six of his games this season, but Monday marked his first multi-hit outing of 2019.

"He's got all the talent in the world and he's one of the best players I've ever played with," VanMeter said. "I'm just happy for him that he's back healthy. To hit behind him and be able to produce for the team with him is an honor."

Toledo's Mikie Mahtook belted a two-run homer, his fourth of the season in nine Triple-A games.