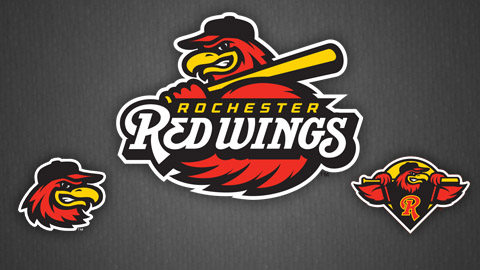 The Red Wings revealed these updated logos for the 2014 season on Nov. 1 at Frontier Field.

ROCHESTER, N.Y. -- The Rochester Red Wings will be sporting a fresh look when they hit the field for the first time in April, as a new era in Red Wings Baseball began on Friday, Nov. 1 when the club introduced a brand-new set of logos at a press conference held at Frontier Field.

"Our Spikes logo has been a beloved one for us, with great popularity both locally and nationally with souvenir sales across every state in the country," said Red Wings President/CEO/COO Naomi Silver. "In keeping with the times, we've decided to take this logo and give him a super update to get a whole new generation of fans excited about his look. We think this new version will be a real hit with our fans."

Spikes, a fan-favorite within the community since the Wings moved to Frontier Field in 1997, will remain the focal point of the Red Wings new primary logo, which will serve as the Red Wings official trademark and will appear on all marketing efforts as well as merchandise.

Always an intimidating character to International League opponents, Spikes has spent more time than ever in the weight room since the Wings' season ended in early September, and the results are evident in his new look. In the primary logo, the new Spikes now glares across his colossal left arm with a ferocious look while holding a baseball bat over his shoulder.

To complete the primary logo, the word mark "Rochester Red Wings" appears across the bottom half.

"This marks an exciting time in our ballclub's history," said Dan Mason, Red Wings general manager. "Over the years, the Red Wings have had some iconic logos and we feel the new and improved logo will be another in a long line of trademarks that have served our fans and our players well. We are very excited about Spikes' makeover."

While the Red Wings new uniforms won't be introduced until later this offseason, the Wings did reveal their new home, road and batting practice caps on Friday. Each cap is unique in that each represents a different era in Red Wings baseball.

The new home cap, to be donned by Red Wings players at Frontier Field, represents the newest era in Rochester baseball history as it features the fierce stare of the new and improved Spikes on a black cap with a red bill.

Reminiscent of the cap worn by the Wings over the last 17 seasons at Frontier Field, Rochester's new road cap includes the new look Spikes, with an "R" on his chest, holding a baseball bat horizontally across both shoulders. This logo, outlined in white, is set on a red hat with a black bill.

The Red Wings' new logos were designed by Dan Simon and his team at Studio Simon based in Louisville, Ky. Simon has worked with hundreds of sports organizations across the country, including several other Minor League Baseball teams, to develop new brand identities.

Merchandise featuring the Red Wings' new brand went on sale for the first time Friday afternoon. The Red Wings team store will re-open again on Saturday, Nov. 2 from 10 a.m.-2 p.m. The offseason store hours are 10 a.m.-4 p.m. Monday-Friday and beginning Nov. 30, the team store will be open on Saturday's from 10-2 for the holiday season. The new merchandise is also available around-the-clock at RedWingsBaseball.com.

The Red Wings recently wrapped up their 11th season as the Triple-A affiliate of the Minnesota Twins. The Red Wings are operated by Rochester Community Baseball, Inc. and have been a community-owned pro baseball franchise since 1957. Rochester's pro baseball history dates back to 1885.