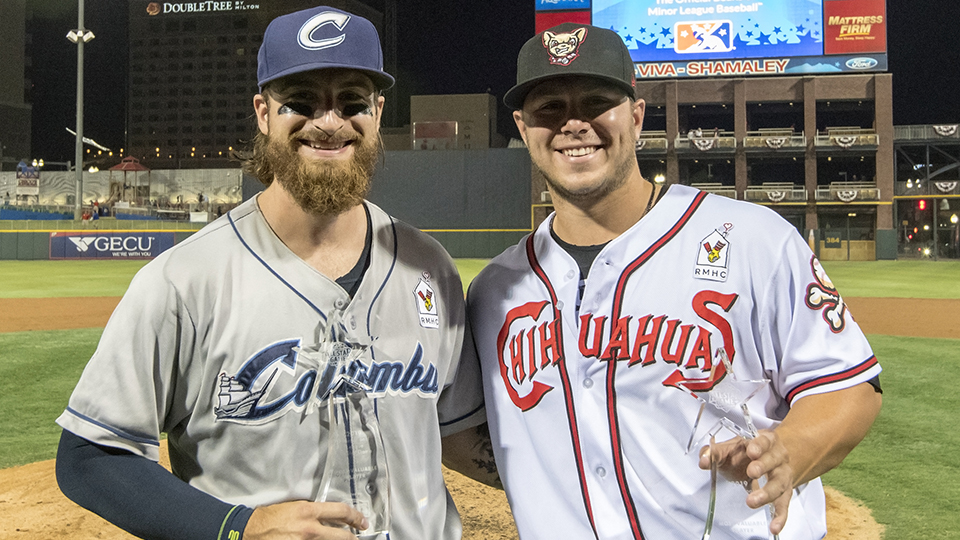 EL PASO, Texas -- The Chihuahuas were looking to show off their city and ballpark at the Triple-A All-Star Game at Southwest University Park, but with power at the plate and dazzling defense on the diamond, Ty France and Luis Urias made sure the Padres prospects got their share of the spotlight as the Pacific Coast League beat the International League for the third year in a row, 9-3.

France and Urias homered to send the crowd of 9,706 into a frenzy, while the PCL pitchers, led by Memphis right-hander Jake Woodford, put to rest any idea that every day is Home Run Derby in their park. France, who was named BUSH's Beans Top Star for the PCL, immediately made an impact defensively, knocking down a sharp grounder to third by Kyle Higashioka in the first inning.

"Incredible play," Woodford said. "That just solidified my thought that these guys are here for a reason. That's one thing I wasn't afraid of -- contact on our field. There are so many talented players on this team, that was the last thing I was worried about, guys making plays."

France gave Woodford a confidence boost with that play, but it didn't have to settle any of his nerves.

"I wasn't too nervous," said the 27th-ranked Padres prospect. "I was just treating it like another game. To be able to pick my pitcher up the way I did, Yasmany [Tomas] picking me up over there [at first]. Fun way to start the game."

The PCL did damage in the second inning. With Orioles No. 6 prospect Keegan Akin on the mound, Tomas led off with a single to center field and scored two outs later on a double by San Antonio catcher David Freitas. Fresno's Yadiel Hernandez singled in Freitas to chase Akin, who took the loss. Pawtucket's Dan Runzler came on in relief and immediately surrendered an RBI triple to Rockies No. 14 prospect Yonathan Daza and an RBI single to eighth-ranked A's prospect Jorge Mateo for a 4-0 PCL lead.

In the third, France electrified the crowd and set off fireworks beyond the center field wall, where he deposited an 0-2 offering from Gwinnett's Ben Rowen in the kids' playground to make it 5-0.

"He'd thrown a slider in the other batter's box that I'd swung at," France said. "I think he tried to repeat it and he hung it. I just put a good swing on it."

While the PCL was enjoying its time on the bases, the IL was being frustrated by Woodford, who fanned two in a pair of perfect innings before Iowa reliever Colin Rea tossed two more scoreless frames.

"It felt good," said Woodford, the Cardinals' No. 23 prospect. "Freitas and I got on the same page early and I just tried to stay within myself. Just do what got me here. If you just go out there and execute your game plan, your strengths, good things happen more often than not."

Columbus' Josh Smith took over for the IL in the fourth, but Freitas doubled again and came home on Mateo's triple. In the fifth, the PCL padded its cushion on Urias' blast.

"To see Luis do that, that was even more fun than mine," France said. "He's busted his butt all year and his power numbers are showing up this year. For him to show it off at the All-Star Game is pretty cool."

The IL finally manufactured a run in the fifth when Fresno's Dakota Bacus walked Gwinnett's Travis Demeritte, who took third on a single by Charlotte's Ryan Goins. Bacus got Scranton/Wilkes-Barre's Ryan McBroom to ground into a double play that scored Demeritte. An inning later, Tigers No. 7 prospect Willi Castro singled and came home on a sacrifice fly by Indians No. 29 prospect Eric Haase.

Haase picked up another RBI in the eighth with a single off Reno's Jimmie Sherfy and took home the Top Star Award for the IL.

"It's fun just to come out here and be with the guys," the Columbus catcher said. "All those guys earned it and it was great. Not really a game plan, just go out and see what everybody can bring to the table and it's fun again. Playing baseball's fun."

To complete the El Paso showcase, Chihuahuas catcher and Padres No. 14 prospect Austin Allen floated a single to center that dropped right into the EP logo and plated the PCL's ninth run in the seventh.

"He claims he got barrel on that, but I don't believe him," France said.

"I was trying to crush a ball, get it up in the air," Allen said. "Swung and missed on one of them and caught the end of the bat on the other."

One thing the Padres prospects did agree on was that El Paso put on a good show.

"I'm just glad that these other guys get to come here and see what the Chihuahuas are all about," Allen said. "From the field, the clubhouse, the facilities ... everything. This place is top-notch and we all realize that we're all extremely blessed and fortunate that we have a situation like this."

"It was a good day for the Chihuahuas," France added.