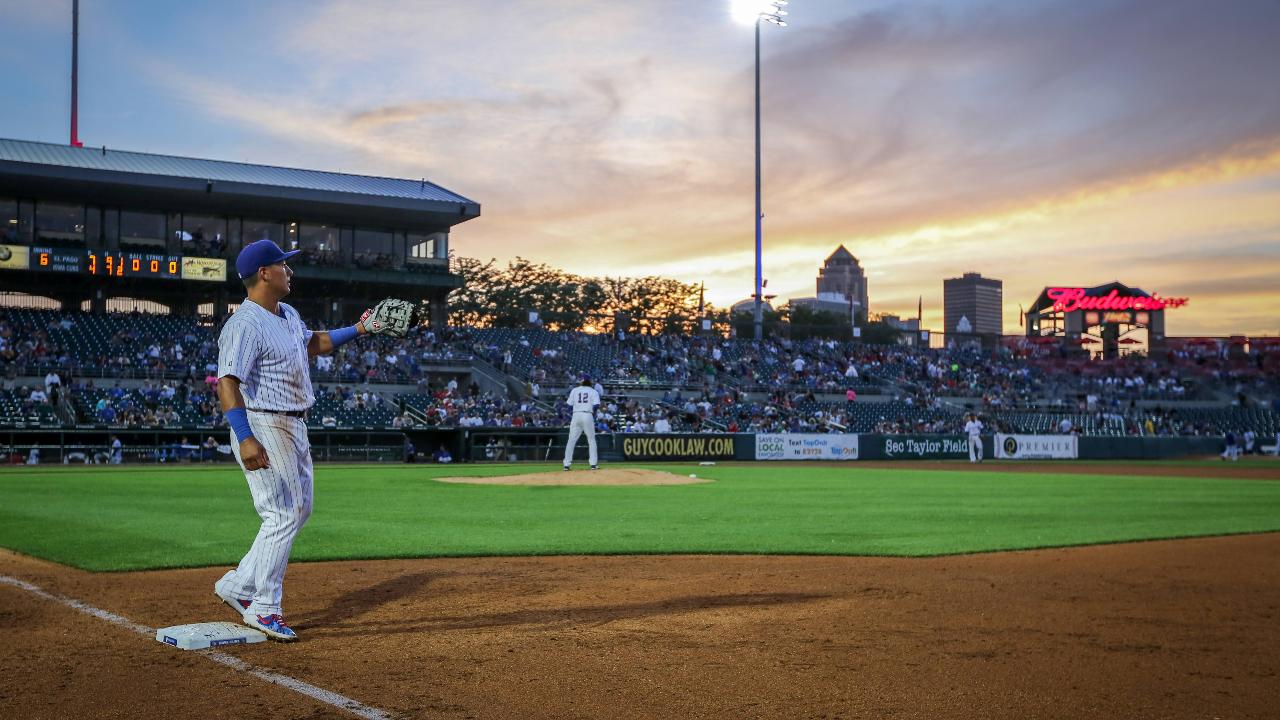 Looking back on 2019, we'll start with the end. The Iowa Cubs fell to the Round Rock Express 10-5 in a decisive Game 5 of the PCL Semifinals, Sunday at Principal Park. It's second-nature to feel a sense of disappointment going out with a loss, but the Iowa Cubs had much to celebrate in 2019.

The I-Cubs finished the regular season 75-65, capturing their first Division Title since 2008. It was their third 75-plus win season in the last decade. Iowa fell to 0-2 in the first round of the playoffs, suffering two heart-breaking walk-off, extra inning losses in Round Rock. The team battled back to win the next two games by a one-run margin - getting their own walk-off victory in extras in Game 4 - to force a Game 5, but the I-Cubs were ultimately outdone.

Three players moved through Iowa on their way to major league debuts with Chicago - pitchers Adbert Alzolay and Danny Hultzen, as well as infielder Robel Garcia.

Alzolay finally cracked the big league roster after battling injuries over the last two seasons. The top-prospect's season was delayed until mid-May due to an side injury, but Alzolay quickly got back on track and was in Chicago less than six weeks later. The 24-year-old allowed one run through 4.0 frames and grabbed the win in his debut against the Mets on June 20.

Garcia was a dark horse that made the ascent from Double-A Tennessee to Chicago in a matter of three months. Prior to this season, the infielder hadn't played affiliated baseball since 2013. Garcia blasted 21 home runs in 72 games between Tennessee and Iowa before Chicago came calling in July. He amassed 31 bombs through the three levels combined before receiving a September call up.

Hultzen was another unlikely candidate to make his way to Chicago. The 29-year-old was selected second overall in the 2011 draft by the Seattle Mariners, but a barrage of injuries kept the lefty from reaching his potential. Hultzen signed with the Cubs in the 2018 offseason and though his progress was slowed by several more Injured List stints, Hultzen debuted for Chicago as a September call-up.

Iowa saw 72 total players and made a franchise-record 232 transactions throughout the campaign. Through all the movement, Iowa had five players that were active from Opening Day through the end of the season - pitchers Matt Swarmer and Colin Rea; infielders Trent Giambrone and Phillip Evans; and outfielder Donnie Dewees. The group's durability translated into success as they scattered their names across the Iowa record books.

Rea had one of the most memorable seasons in recent history, going 14-4 with a 3.95 ERA in the regular season on his way to PCL Pitcher of the Year honors. Since Iowa joined the league in 1998, Rea is just the second I-Cub to collect the accolade. Rea tied the franchise record with his 14 wins, while becoming the first PCL pitcher since 2016 to earn as many victories.

Smacking 27 doubles and 23 home runs, Giambrone became the first Iowa Cub with 20 two-baggers and 20 long balls in a season since Javy Baez did it in 2014. Giambrone also led the I-Cubs with 17 stolen bases.

Evans was a doubles machine, collecting his 30th on the last day of the regular season. Evans became the first Iowa player to reach that benchmark since Josh Vitters in 2012.

Jim Adduci was another notable contributor to the I-Cubs' season. The first baseman hit .301, becoming the first I-Cub to bat over .300 with 100-or-more games played since 2012. Adduci also finished the season with the second-longest hitting streak in the PCL with a 19-game stretch from May 20-June 24.

As a team, the I-Cubs continued their historic season as they were second in the PCL with a .984 fielding percentage. Their 79 errors shattered the previous franchise record of 96, most recently matched in 2018.

On the other side of the ball, Iowa allowed a franchise-record 191 home runs, surpassing the previous high of 170 set in 1996. Iowa's pitching staff was otherwise tops in the league with the third-best ERA (4.67). Their 1,247 strikeouts were the fifth-most in the PCL and were the most in Iowa franchise history.

Principal Park saw nearly one-half million fans throughout the course of the season, putting the park's all-time total just over 13.5 million and Iowa's 51-season total at nearly 18 million. A season-high 13,395 fans attended a July 26 game against Round Rock for the 15th-largest crowd in the team's history.

The Iowa Cubs' 2020 season begins on April 9 in Nashville, with the home schedule slated to kick off on April 14 vs. San Antonio. Season tickets are available by calling 515-243-6111, visiting www.iowacubs.com or at the Principal Park front office.