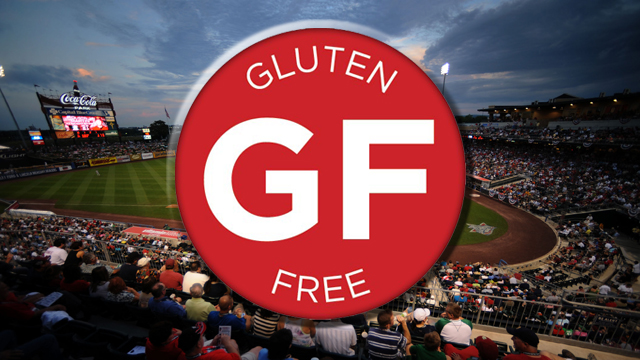 The IronPigs have added a gluten-free food stand featuring unique sandwich offerings, a baked potato bar, snacks, fresh fruit and even a gluten less beer selection in an effort to provide more food options for those diagnosed with Celiac Disease or choosing to enjoy a wheat-free diet.

"It has always been a top priority of ours to truly make Coca-Cola Park a venue that everyone within the Lehigh Valley can enjoy," remarked IronPigs General Manager Kurt Landes. "By providing our fans with additional gluten-free food options, we hope that those suffering from Celiac Disease or with gluten diet restrictions will now be able to take advantage of everything that this tremendous ballpark has to offer."

This new food stand, located on the Field Level concourse behind Section 106, offers hearty meal selections such as a pulled pork sandwich or a Pennsylvania Dutch barbeque turkey sandwich served on a gluten-free roll. Fans can also take advantage of the new baked potato bar with a choice of either pulled pork or turkey barbeque as well a wide array of toppings that include broccoli, scallions, cheese sauce, sour cream or chopped tomatoes.

Adults can now enjoy Redbridge beer from the gluten-free stand. Redbridge is made without wheat or barley so the estimated 18-million people believed to have a gluten sensitivity can enjoy a great tasting beer. Redbridge is a rich, full-bodied lager brewed from sorghum for a well-balanced, moderately hopped taste.

There are also a number of gluten-free snack selections available at this new food stand including brownies for dessert as well as trail mix and whole fruit.

Celiac Disease is an autoimmune digestive disease that can affect men and women of all ages and an estimated 1% of the population suffers from the ailment.

Coca-Cola Park has been among the most progressive venues in professional sports since its highly-acclaimed debut in 2008, receiving numerous honors and distinctions, including Ballpark Digest's "Ballpark of the Year" award and "Best Game Operations and Presentation" award as chosen by gameops.com.

By crossing the 600,000 plateau yet again in 2013, the IronPigs have the exclusive distinction of being the only Minor League franchise to eclipse the elusive 600,000 attendance barrier for each of the last six campaigns.

Single-game tickets, mini-plan packages and group tickets for all IronPigs home games presented by Capital BlueCross, are on sale now and can be purchased at the Coca-Cola Park Ticket Office, online at www.ironpigsbaseball.com or by calling (610) 841-PIGS (7447).