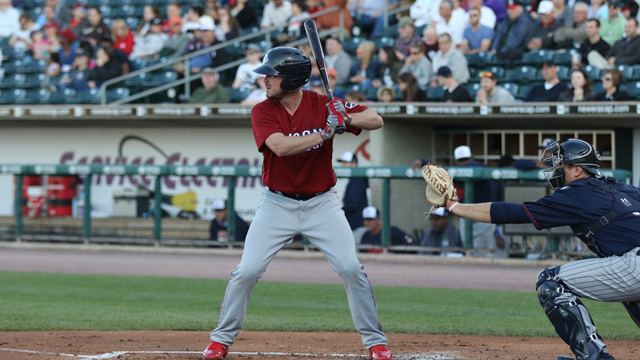 The IronPigs (1-1) stranded nine runners on base and fell 4-2, as the Scranton/Wilkes-Barre RailRiders (1-1) evened the series Friday night at Coca-Cola Park.

The RailRiders jumped out to a quick 2-0 lead in the top of the first inning off Pigs starter Elniery Garcia. Billy McKinney started the scoring for Scranton, as the left fielder singled home Mason Williams who led off the game with a double down the left field line. Mike Ford then grounded out after a Miguel Andjujar double to score McKinney from third to put the RailRiders on top 2-0.

Donovan Solano would add on to the RailRiders lead in the top of the third, scoring Williams from second base after he walked and advanced to second on a wild pitch.

Trailing 3-0 in the bottom of the frame, the Pigs bats came to life. Four-consecutive hits led to two runs for the Pigs with just one out in the frame. Brock Stassi sent an RBI double to left field, scoring Scott Kingery who singled earlier in the frame to center. After Stassi's RBI double, Angelo Mora plated Christian Marrero on an infield single to trim the Pigs deficit to 3-2.

Unfortunately for the Pigs that is as close as they would come, as with just one out in the frame, the Pigs stranded the bases loaded to end their threat.

The Pigs again failed to score with runners in scoring position in the fifth, sixth and seventh innings.

On the night, the Pigs went 2-for-10 with runners in scoring position.

Angelo Mora had a 3-for-4 night with an RBI and is now hitting .625 in the first two games of the postseason..