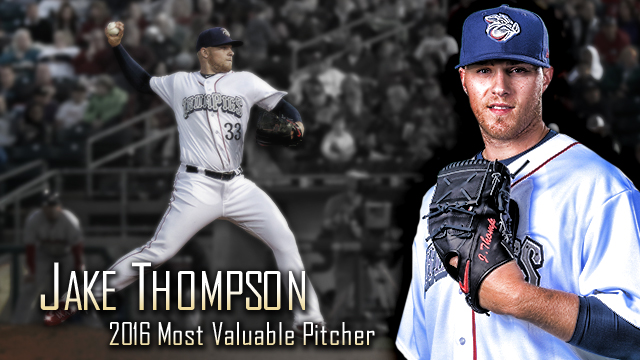 (Allentown, Pa.) -RHP Jake Thompson, who won his last eight decisions with the IronPigs and posted an IL-best 2.50 ERA before earning his first promotion to the Major Leagues earlier this month, was named the International League's Most Valuable Pitcher as announced by the league office on Tuesday. Postseason awards were selected by the circuit's managers, coaches, media, and club representatives.

Thompson, 22, was 11-5 with a 2.50 ERA in 21 Triple-A starts and concluded his IronPigs career by establishing a franchise-record with victories in each of his last five starts. In his final 11 IL games, he was a gaudy 8-0 with a 1.74 ERA, lowering his ERA from 4.23. Over a longer period beginning on May 3, he logged a 10-2 record with a 2.24 ERA while clearly establishing himself as the league's most dominant hurler.

Thompson's record-setting season included a number of other remarkable feats, including a 22-inning scoreless streak (tied for the 2nd longest in franchise history) and a stretch of nine consecutive quality starts from June 5 to July 20 in which he was a remarkable 6-0 with a 0.57 ERA.

He joins RHP Tyler Cloyd (2012) as the only IronPigs to capture the coveted "Most Valuable Pitcher" award.

Since Thompson was acquired by the Phillies as part of the Cole Hamels deal with Texas on July 31, 2015, he's gone 17-10 with a 3.26 ERA in 33 combined starts, including his first five in the Major Leagues. He was originally drafted by Detroit in the 2nd round of the 2012 draft out of Rockwell-Heath High School (TX).

RHP Edward Mujica - who posted 23 of his league-best 24 saves with the IronPigs - was also named to the year-end All-Star team today. He's currently pitching as a Minnesota Twins farmhand with the Rochester Red Wings.

Single-game tickets for all remaining IronPigs home games, including the Governors' Cup playoffs, are on sale now and can be purchased at the Coca-Cola Park Ticket Office, online at www.ironpigsbaseball.com/tickets or by calling (610) 841-PIGS (7447).

The 2016 IronPigs season is presented by Capital BlueCross.