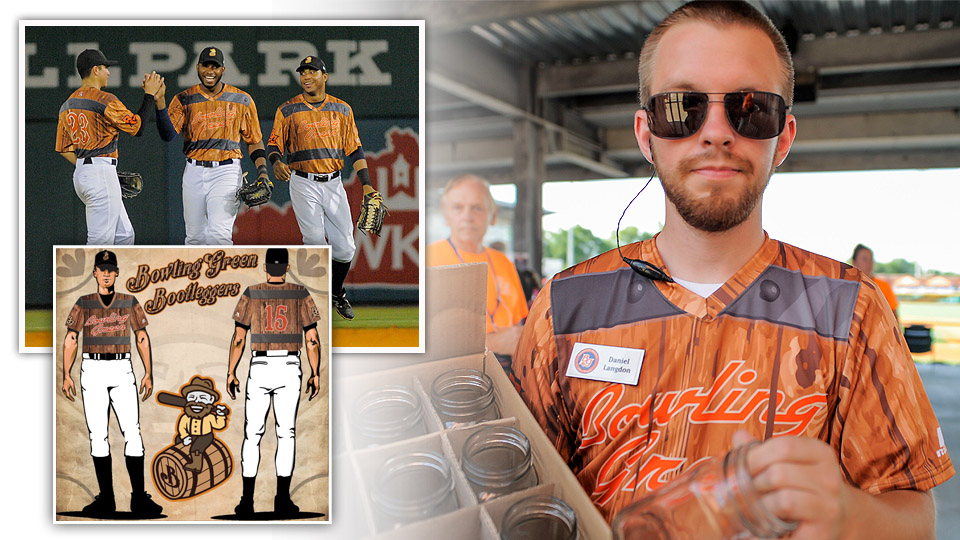 On July 16, the Bowling Green Hot Rods took the field as the Bootleggers. Fans received mason jars at the gate.

After generating an immediate buzz, the Bowling Green Hot Rods' "Bootlegger Night" has received the ultimate proof of its success: It's the 2016 Promo of the Year.

The Hot Rods took the field as the "Bootleggers" on this special evening, wearing bourbon barrel theme jerseys and caps depicting a bearded, barrel-riding and seemingly jovial bootlegger. Fans (21 and up) received mason jars upon entering the ballpark, while a "pickin' and grinnin'" bluegrass band helped establish the throwback, raucous ballpark atmosphere. Throughout the evening, photos on the videoboard depicted the Bowling Green players wearing straw hats and overalls.

Hot Rods general manager Eric Leach said the team began brainstorming "Bootleggers Night" during the summer of 2015. As with so many Minor League promotions, it became a case of one thing leading to another.

"We honestly weren't set on 'Bootleggers' at first -- we also considered 'Moonshiners,'" said Leach. "But the reality with Moonshiners was that we kept running into trademark issues, with the TV show and things like that. We had a guy on staff, Brandon Lamarche, who did some [jersey] mock-ups and it was awesome. We sat on it for a couple months and then [in February] pulled the trigger."

Though the promotion was announced during the dregs of the offseason, it immediately garnered nationwide attention. A $25 "Swag Package," designed for fans from out of state, included a Bootleggers cap and mason jar.

"Within the first two weeks, we had sold stuff in 32 states and two countries," said Leach. "We also had the Speakeasy Package, which also included a ticket to the game and a VIP moonshine tasting."

Moonshine-based mixed drinks, featuring Hot Rods-themed names like "White Lightning" and "Burnout," were available during the game as well. The commitment to the "Bootleggers" concept could only go so far, however.

"All of our moonshine was signed, sealed and OK'd by our government," said Leach. "But people here still sip and transport their moonshine in mason jars and we have some season ticket holders who, unofficially, like to make their own. We worked with [concessionaire] PSC to make the mixed drinks and weren't sure how big or small they'd go over…. We sold out by the third inning, so clearly it wasn't enough, and since then we've had requests to carry moonshine full-time."

The Hot Rods are now two-time Promo of the Year MiLBY Award winners as the team also won in 2009 for their "Cave Shrimp 'What Could've Been Night.'" This was the first "What Could've Been" promo in Minor League Baseball history, a concept that has since taken hold throughout the industry. Bootleggers Night is, clearly, a direct descendent.

Leach said that while the team may eventually brainstorm new "What Could've Been" scenarios, for now their focus will be on continuing to enhance the Bootleggers phenomenon.

"It's going to be part of our repertoire next season -- we're going to make it an annual thing," he said. "Moonshine is an art form here in the hills of Kentucky."

Benjamin Hill is a reporter for MiLB.com. Follow and interact with him on Twitter, @bensbiz. This story was not subject to the approval of the National Association of Professional Baseball Leagues or its clubs.