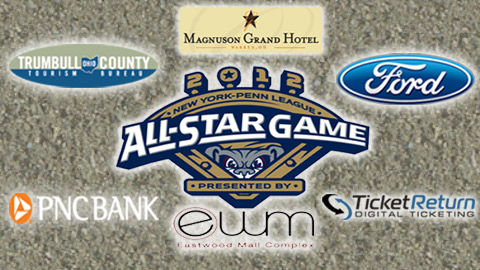 The Mahoning Valley Scrappers have been named host of the 2012 New York-Penn League All-Star Game. The game will be played on Tuesday, August 14, 2012 at Eastwood Field. The All-Star Game will feature the best prospects in an American League versus National League game format.

The Mahoning Valley Scrappers announced that the Eastwood Mall Complex will be the presenting sponsor of the 2012 New York-Penn League All-Star Game. "The Mahoning Valley Scrappers really are a civic treasure. They have added a great deal to the vitality of this community and we're thrilled to have them playing at Eastwood Field. That's why we, the staff, management, and owners of the Eastwood Mall are proud to offer our support by sponsoring the 2012 All-Star Game," said Anthony Cafaro Jr., Co-President of the Cafaro Company.

This is the first time the Mahoning Valley Scrappers will host the NYPL All-Star game. "We are very excited to have this opportunity to showcase not only the spectacular talent of our league, but also the Mahoning Valley," said Jordan Taylor, Scrappers General Manager. "With the support from the Cafaro Company, we will be able to put on a first class event."

Tickets are available at the Eastwood Field Box Office, online or by calling 330-505-0000. Ticket prices range from $10 to $18. All-Star event tickets are also available for Monday, August 13 for the All-Star Valley Gala hosted by TicketReturn. PNC Bank is proud to present the All-Star Luncheon on August 14. To be put on a waitlist for the Luncheon, contact the Scrappers Front Office at (330) 505-0000. There will also be a Home Run Derby hosted by Trumbull County Tourism Bureau, and a Post-Game Party on Tuesday, August 14 driven by Ford. For more information on tickets and events click on the links below.

The Magnuson Grand Hotel is the host hotel of the Mahoning Valley Scrappers. To get more information on the hotel, click on the link below.

For more information, contact the Scrappers front office at (330) 505-0000 or visit www.mvscrappers.com.

The Scrappers would like to thank their sponsors of all the festivities for the 2012 New York-Penn League All Star Game: