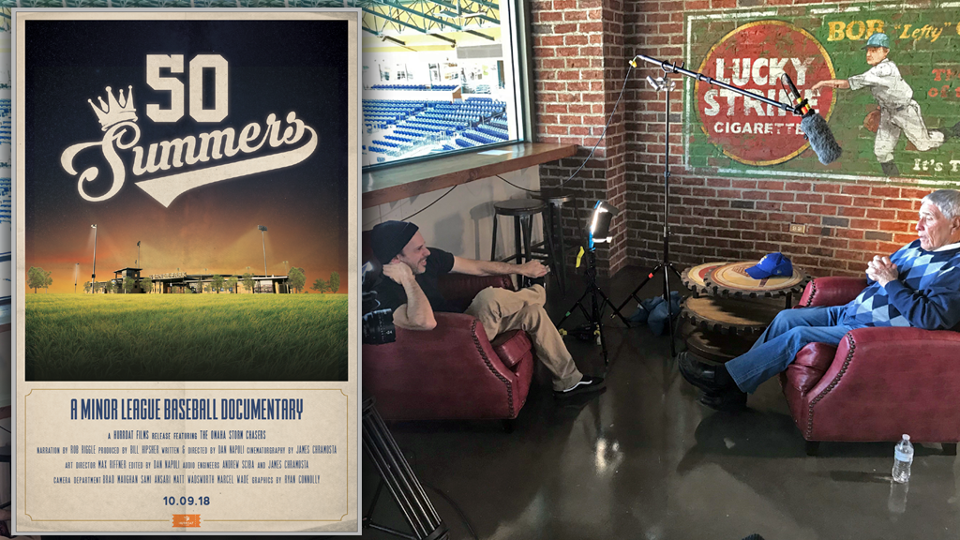 LAS VEGAS -- Movie screenings are not usually a part of the Baseball Winter Meetings experience, but there's a first time for everything.

On Monday night, in a Mandalay Bay hotel ballroom far removed from the back-slapping hustle and bustle of the teeming lobby, approximately 30 people gathered for a screening of "50 Summers." This new documentary, produced by Hurrdat Films, chronicles a half century of Minor League Baseball in Omaha, Nebraska.

The screening at the Winter Meetings marked the third time that "50 Summers" has been shown in public; its producers are currently entering it into various film festivals while working to secure a distribution deal. The film details the history of Omaha's Pacific Coast League franchise, from its 1969 inception (as the Royals, playing at iconic Rosenblatt Stadium) through the team's current incarnation as the Papillion, Nebraska-based Omaha Storm Chasers. Throughout the film, behind-the-scenes footage from Opening Day 2018 is interwoven with archival clips and interviews with a wide range of former players, front office members, business leaders and journalists. These include everyone from financial mogul Warren Buffett to Storm Chasers president Martie Cordaro to Omaha alumnus George Brett to Minor League Baseball president Pat O'Conner. (Full disclosure: this writer makes a brief appearance in the film as well.)

Video: Check out the tale of Minor League Baseball in Omaha

"50 Summers" is directed by Dan Napoli, an Omaha-based documentarian with a background in punk rock and action sports.

"['50 Summers'] is the biggest level, but I've been doing documentaries for 15,17 years one way or another," Napoli said after Monday's screening. "It sounds cliché as a filmmaker, but you grow every time you do one of these things. Three or four years ago I honestly wasn't quite good enough to do something like this, because it's a really complex story that we're trying to weave together.

"The idea for came from our producer, Bill Hipsher, who's a lifelong Omaha fan. He's the head of our studio and the head of the ad agency that owns the studio. And Omaha was coming up on its 50th year. ... Bill's like, 'I have an idea,' in very broad strokes. And my job as a director is to get in there. Like, 'OK, what does that really mean?'"

Napoli soon found that the story of Triple-A Omaha is, in many ways, the story of Minor League Baseball writ large. The franchise's fortunes -- from optimistic beginnings through declining relevance through rebirth within a significantly revamped operating model -- mirror the ways in which teams around the country adapted (or failed to adapt) to the industry's changing realities. The end result is a film that weaves three separate components -- the modern-day gameday experience, the history of Omaha and the history of Minor League Baseball -- into one coherent whole.

"Everybody thinks about film as being so visual. It certainly is," Napoli said. "But it's writing, man. ... And what it comes down to is being able to write a story and put those things together. And what got interesting in the writing process and the preproduction process, every time something was listed as a big movement for Minor League Baseball, it correlated to something happening in Omaha.

"I couldn't get over, too, just how much I learned. ... I think people -- and I'm one of those guys, so I'm self-identifying -- are kind of ignorant to how Minor League Baseball actually works. ... I've gone to Storm Chasers and Omaha Royals games. I moved there in 2006, so it was really interesting to learn that, 'Oh wow, Minor League Baseball is its own little universe.'"

The next step is sharing the story of this "little universe" with as many people as possible.

"You have to tell a really good story, but you can tell it in more niche ways," said Napoli. "With the rise of Amazon Prime and Hulu and Netflix, I think it's encouraged a set of people who are like, 'I'll watch cool stories. This might not totally be my world but I can learn a lot or pick up more things.' Not that television or any other traditional means I'd be opposed to, but I think streaming is what we're hoping for, and that puts more eyeballs on the film and more eyeballs on Minor League Baseball.

"I think the takeaway is that through the lens of the Omaha franchise you can see the trajectory of the Minor League Baseball story over the last half century. That's what we were trying to do."