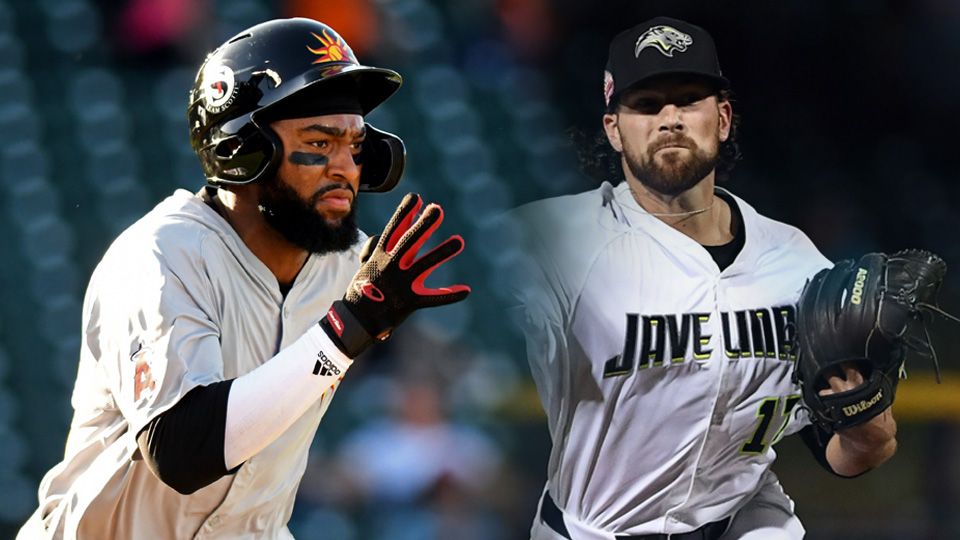 Jo Adell and Penn Murfee give Week 3 a pair of award winners from the AL West. (Buck Davidson, Jennifer Stewart)

On Tuesday, Jo Adell was named to the Arizona Fall League Fall Stars Game roster. On Wednesday, he added another item to his AFL resume.

Ranked as MLB.com's No. 5 overall prospect, Adell was arguably the top talent headed to Arizona this fall, and he did not disappoint with his performance last week. The right-handed slugger went 7-for-17 with a homer, three doubles, five RBIs and four runs scored over four games for Mesa. His .500 on-base percentage and 1.265 OPS each led AFL qualifiers last week while his seven hits and 13 total bases were tied atop the leaderboard.

After opening 1-for-24 through his first five games with the Solar Sox, the 20-year-old outfielder went on an eight-game hitting streak that ended with an 0-for-2 showing on Monday, though he did walk twice in four plate appearances. Adell is hitting .283/.377/.483 with two homers, six doubles and seven RBIs in 14 games for Mesa. He hit .289/.359/.475 with 10 homers and seven steals over 76 games between Class A Advanced Inland Empire, Double-A Mobile and Triple-A Salt Lake in a regular season that was limited by hamstring and ankle injuries suffered during Spring Training.

Pitching for Peoria, Murfee made a pair of strong starts to capture his award. The 25-year-old right-hander fanned seven and allowed two hits and a walk over four scoreless innings against Surprise on Oct. 1 and followed that up five days later by giving up one earned run on one hit and a walk and fanning four over four innings against Mesa. His 11 strikeouts and eight innings pitched were each tops among AFL pitchers for the week while his 0.63 WHIP was third-best among qualifiers.