Baltimore's rebuild features reinforcements from near and far 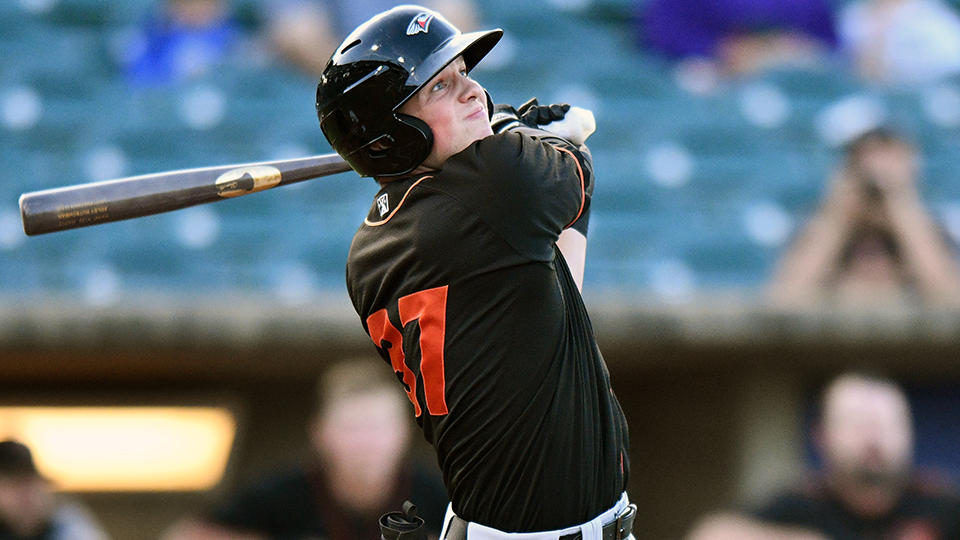 Adley Rutschman played at three levels of the Orioles system this season after being taken first overall in the Draft. (Ken Inness/MiLB.com)

The Orioles entered a rebuild last season with the trade of perennial All-Star Manny Machado to the Dodgers, and the returns from that deal -- along with other assets the organization acquired since then -- have begun to show in Baltimore's system. The organization finished 411-391 (.512) in 2019 as a pair of teams clinched postseason berths. Double-A Bowie made it to the Eastern League Finals, and Class A Delmarva claimed the South Atlantic League Northern Division crown before being ousted in the first round of the playoffs.

Baltimore ended the year with a quartet of MLB.com's Top 100 Prospects in Adley Rutschman (No. 6), Grayson Rodriguez (44), DL Hall (60), Ryan Mountcastle (64). Rodriguez's emergence was a particularly pleasant surprise, as the right-hander -- who began the year missing from the top-100 list -- rose to become the organization's second-ranked prospect.

With an emphasis on developing arms in 2019, the O's feature 15 pitchers among their top 30 prospects. And as Baltimore's Minor League pitching coordinator Chris Holt explained, the philosophy on bringing those arms along has also evolved: "The results are fine, but what we're focused on and what everyone has bought into is the quality of work and having substance to each and every repetition. And the things they were able to learn this year ... they have an improved ability to know what they're working on and why, and that's been very encouraging."

Catcher -- Adley Rutschman, GCL Orioles (five games), Aberdeen (20 games), Delmarva (12 games): The top overall pick in June's Draft did not disappoint in his first professional season. Rutschman climbed three levels and rose to become the sixth-ranked overall prospect. A force both behind the dish and at the plate, the 21-year-old posted a combined .254/.351/.423 slash line with 13 extra-base hits and 26 RBIs over 37 total games. He also called the first no-no in Aberdeen history on Aug. 12 at Vermont.

"He was everything that was advertised," Orioles director of Minor League operations Kent Qualls said. "Just a complete player. A switch-hitting catcher with good power, and he made an easy transition into pro ball and was able to play at three levels his first year, which is always impressive. There was a little bit of an adjustment period, but once he got his feet on the ground, he really began to hit and perform well all around."

First baseman -- Ryan Mountcastle, Norfolk (127 games): There really isn't much left for Baltimore's fourth-ranked prospect to prove in the Minors, so his fifth straight appearance as an MiLB.com Organization All-Star should be his last. After being drafted as a shortstop and playing at third base exclusively last season with Bowie, Mountcastle spent 2019 in Norfolk, where he saw time at first and in left field. His versatility complements his extraordinary production at plate, which has improved every year. The 22-year-old finished with a career-high .312/.344/.527 slash line, 25 dingers and 83 RBIs while racking up an International League-best 162 hits. No wonder he was named the IL MVP.

"He really just put together a fantastic year," Qualls said. "Really, the most complete year as a pro that he's had and what was interesting with all that offensive production was that he was also learning two new positions. We put him at first, and midway through the season, left field was introduced as well. So to have that year offensively while learning two new positions is pretty remarkable."

Second baseman -- Adam Hall, Delmarva (122 games): The 20-year-old from London, Ontario, continued to climb with a full season of work in the South Atlantic League. The 14th-ranked Orioles prospect makes his second consecutive appearance as an MiLB.com Organization All-Star after batting .298/.385/.395 with a .780 OPS, 31 extra-base hits and 78 runs scored. Hall's 138 hits stood second in the Sally League and his 33 stolen bases ranked third on the circuit.

"He was really the offensive catalyst for that Delmarva team at the top of their lineup," Qualls said. "When he hit, their offense performed very well and he really -- for a 20-year-old in his first full season -- just put together a fantastic year at the plate and in the field."

Third baseman -- Rylan Bannon, Bowie (110 games), Norfolk (20 games): One of the pieces in the aforementioned Machado trade, Bannon made the jump to Triple-A on Aug. 13 and his offensive production rose. The club's No. 23 prospect continued to show improvement at the hot corner while posting a .317/.344/.549 slash line with 18 runs and 17 RBIs in 82 at-bats with the Tides. This is Bannon's third straight MiLB.com Organization All-Star nod, but first with the Orioles.

"It's a small sample size, but to step in at Triple-A and perform right away is a good sign," Qualls said. "He is a really sound defensive player, and he started to show more and more power this year. We're looking forward to what's next for him."

Shortstop -- Mason McCoy, Frederick (27 games), Bowie (105 games): McCoy made what many consider the toughest jump for a Minor Leaguer -- to Double-A -- and not only handled the transition well but provided a spark for his new club in Bowie. The 24th-ranked Orioles prospect finished with a combined .290/.345/.378 slash line, a career-best .723 OPS, 158 total hits and 81 runs scored. He also led the Baysox to a playoff berth.

"He's just a steady everyday player, and he was one of the key players in the turnaround for Bowie when he got promoted," Qualls said. "That's when the Bowie team turned the season around, and he was primarily in the leadoff role. But just a breakout season for him offensively. … Always a good reputation with his glove, he's got a true shortstop's glove. Good range, good arm, but a big step forward with his on-base and overall offensive play."

Yusniel Diaz, Aberdeen (three games), Frederick (six games), Bowie (76 games): Another key return from Los Angeles in the Machado trade, Diaz battled injuries but shined whenever he was on the field. After returning from his first stint on the injured list, Baltimore's fifth-ranked prospect caught fire in July, batting .299/.353/.514 with an .867 OPS, 16 extra-base hits and 22 RBIs over 28 games. However, he landed on the IL again on Aug. 2. The 23-year-old returned on Aug. 26 and finished the season on a high note, collecting nine hits and driving in five runs for Bowie in the playoffs.

"He did miss some time twice with some nagging injuries, but we are just overall pleased with how he finished the season," Qualls said. "He really put it together at the plate midseason, and then he really finished strong. One of the leaders in the middle of that lineup for Bowie as they made a push for postseason and had a terrific year."

DJ Stewart, GCL Orioles (five games), Bowie (four games), Norfolk (63 games), Baltimore (44 games): Stewart got his first taste of the big leagues last season and worked his way back to The Show after posting a .291/.396/.548 slash line over 63 games in Norfolk. Having navigated his way through three rehab assignments, the 25-year-old was recalled by Baltimore on Aug. 6. He was sent back down the next day after suffering a concussion but rejoined the big league club on Aug. 16.

"He was very productive with Norfolk, and he would have put up monster numbers if he stayed there all year," Qualls said. "But he just grinded and earned his way back for a new big league opportunity this year and took full advantage of that opportunity."

Mason Williams, Norfolk (121 games), Baltimore (11 games): The 28-year-old journeyman was signed to a Minor League deal by the Orioles late in Spring Training for outfield depth, and he made the most of his opportunity. Williams hit .308/.371/.477 while posting an .848 OPS with 18 taters, 67 RBIs and 62 runs scored for the Tides. He made a return to the bigs as a September callup and ended his season in Baltimore.

"We signed him at end of Spring Training after an injury to Austin Hays because we needed a center fielder and couldn't have asked for anything better," Qualls said. "He was a pro's pro, probably the MVP of the Norfolk team with his performance, and he had to wait a long time for the opportunity to get back to the big leagues, but was finally able to get there."

"When he was healthy and had consistent playing time, Ryan performed really well," Qualls said. "It takes a while to come back from an oblique strain, and then to get the timing back even, but he was a consistent DH with good power and slugging numbers."

Right-handed starting pitcher -- Michael Baumann, Frederick (11 starts), Bowie (11 starts): Named one of the organization's top hurlers, Baumann enjoyed a breakout campaign in 2019. The 2017 third-rounder split time between the Carolina League and Eastern League and finished with a 2.98 ERA, a 1.05 WHIP and 142 punchouts while holding opponents to a .194 average over 124 combined frames.

"He really put it all together this year and once he got to Double-A, he really took off," Holt said. "He improved his delivery quite a bit and was more consistent with the movement to his fastball and breaking pitches. He was working to improve his curveball and changeup, and largely was able to improve both."

Honorable mention: Grayson Rodriguez, Delmarva (20 starts): The 19-year-old posted a 2.68 ERA, a 0.99 WHIP, 129 whiffs and 36 walks over 94 innings. He was also selected to the Futures Game and named the South Atlantic League's Most Outstanding Major League Prospect.

"I saw him for the first time in person in Spring Training, and I saw, as advertised, a kid who has some deception quality to his delivery," Holt said. "A lot of poor swings on his fastball recognition. Hitters don't really pick it up. But on the year, he really worked to improve his off-speed weapons and improve his delivery, and it was a really solid year developmentally for him. The work ethic and focus behind his work was also great to see."

Relief pitcher -- Tim Naughton, Delmarva (22 games), Frederick (24 games), Bowie (one game): Naughton appeared in a career-high 47 games across three levels and posted a career-low 2.79 ERA. The right-hander fanned 74 and limited opponents to a .239 average over 51 2/3 innings.

"The slider that he has is a very special pitch, and he threw it aggressively this year," Holt said. "He also has continued the work to improve his delivery. There is still work he needs to [get] done, but as far as the year he put together, it was encouraging to see how he learned about going about his work in a more focused manner. He never wastes a repetition."