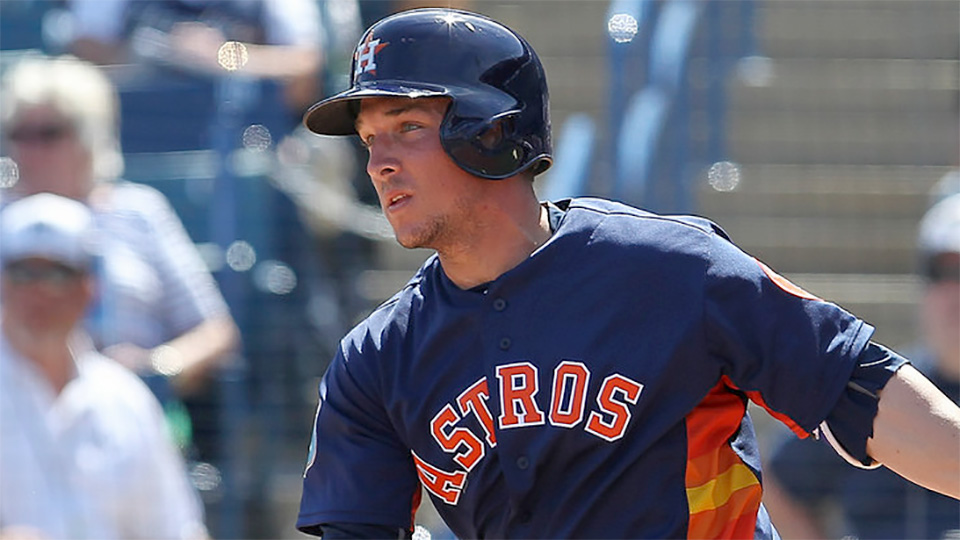 As compensation for not signing Brady Aiken in 2014, the Astros received the No. 2 pick in last year's Draft and used it on Bregman, who was coming off a junior season in which he was a Golden Spikes finalist at LSU. It took some time for the 21-year-old shortstop to get the rust off in his pro debut at Class A Quad Cities, but he very much looked the part of a high pick at Class A Advanced Lancaster, where he hit .319/.364/.475 with three homers and eight stolen bases in 37 games.

The Astros didn't waste time by giving Bregman a non-roster invitation to his first Spring Training, and he impressed those with the big club, including reigning AL Rookie of the Year Carlos Correa, during his brief stay in camp. The day may come -- and soon -- when Bregman, given his hitting abilities and advanced development, forces Houston into the desirable position of having two top shortstops near the game's highest level. And in that case, it's more likely that Bregman is the one who moves positions (possibly to third).

But for now, the Astros will gladly let MLB.com's No. 22 overall prospect show maximum value by sticking at short, starting at Double-A Corpus Christi.

"He came out of a top program at LSU and was polished offensively and defensively," Astros director of player development Allen Rowin said. "Lancaster was a good start for him because there's good pitching, good velocity there, and the environments can be a little bit of a challenge at times. But he handled all that. He had a really good Spring Training here in Major League camp, too. He handled himself well, was quiet, in a 'Be seen, but not heard' kind of mode. You can see why he was a first-rounder."

To know anything about the 2015 Minor League season is to know that Reed dominated it. The 22-year-old left-handed slugger led the Minors with 34 homers, a .612 slugging percentage and 1.044 OPS. His .272 isolated slugging percentage was second among top 100 prospects behind only the mighty Joey Gallo (.280), and that's a number that would statistically put him in line for a 75-grade power tool on the 20-80 scale, even if MLB.com more realistically graded it out at 65.

Part of Reed's statistical dominance was the product of spending half the season in the California League, but he should face somewhat similarly hitter-friendly environs in the Pacific Coast League to start 2016. If he can let it fly at a somewhat similar rate and improve against left-handers (vs. whom he hit .238 at Double-A), Reed should play his way onto the Major League scene after the Super Two deadline, given the uncertainty at first base in Houston.

Special shoutout in this department to reliever Jandel Gustave's fastball, which has reached triple digits. That wicked heat earned the 23-year-old right-hander a spot on the 40-man roster and gives him a good shot to crack the Houston bullpen by season's end.

With Bregman already in the fold, the Astros became the Draft darlings of 2015 when they picked up Tucker at No. 5 and Cameron at No. 37. (Houston was able to get the latter after signing bonus demands scared away other clubs, while it used its bloated bonus pool to ink all three top picks.)

The natural inkling is to pair both players, and indeed the Astros did a little bit of that in 2015, sending the outfielders to the Gulf Coast League and Rookie-level Greeneville in virtually equal measure. Of course, they have their own skill sets, with Tucker being the better overall hitter with a slightly better arm and Cameron possessing more speed and range in center, and the Astros have pledged to evaluate each teenager separately. That said, they should play off each other nicely, starting at Class A Quad Cities, and the plan is to rotate them in the outfield to get a better sense of their defensive futures.

"They're both top-end talents," Rowin said. "There are super high ceilings for both of these guys. We'll just run them both out there, get them both playing time. They're young, so we can mix them around at different positions. You don't have to stick them in center or just a corner. You can mix and match, as long as they get their at-bats. As they go up, we'll learn more about their best position."

When it comes to first base prospects, White has the lesser ceiling and the lower prospect ranking compared to Reed. He's also the one that has cracked the Astros' Opening Day roster.

White has consistently shown an ability to hit for a high average and reach base at a considerable rate at each level at which he's played since being taken in the 33rd round of the 2013 Draft out of Western Carolina. His big breakout, however, came last season at Triple-A Fresno, where he produced a .362/.467/.559 line while walking more times (42) than he struck out (38) in 57 games.

"He just keeps going on," Rowin said. "The bat-to-ball skills are really good. He has a real knack for hitting. The foundation was set when he came out of college, and the skill set he has just keeps moving along. As he goes up each level, he just keeps getting better. It's the sum of all parts. He's developed past the skill set he had coming in, and we're seeing the results now."

With the Astros opening up the first base competition this spring, White made the most of it by bringing his impressive approach and hitting skills to Kissimmee. And that's what seems to have won over the big league staff. The 25-year-old doesn't have the stereotypical power of a first base prospect like Reed, but he should hit enough to provide plenty of value at the highest level while Reed continues to develop.

At the crossroads: Tony Kemp, 2B/OF

This category doesn't have the best connotation, but it's a different type of crossroads for Kemp.

Instead of being at the crossroads of having to improve or losing his prospect status, the Astros' No. 14 prospect is at the crossroads of making the jump to the Majors or perhaps needing a new organization. He hit .308/.388/.386 with 35 steals and a close-to-equal 65/56 K/BB in 541 plate appearances at Double-A and Triple-A, showing the speed and on-base ability to put him on track for a big league debut at some point in 2016.

The problems come on defense. The 24-year-old is a natural second baseman but is blocked by franchise cornerstone Jose Altuve. Because of Kemp's speed, the Astros tried him out in center field, where he played at Vanderbilt, but the organization blocked him there by picking up Carlos Gomez at last year's trade deadline.

The focus for Kemp is continuing to show plus hit and run tools while handling whatever defensive duties are handed him upon his return to Fresno to show he could be a utility man for Houston down the line or perhaps even a starter somewhere else.

More to keep an eye on: Colin Moran hit .321/.408/.500 in his final 59 games last season at Double-A after a fractured jaw hindered his first half. The 23-year-old third baseman continued to show a sweet and easy swing from the left side this spring and, with Luis Valbuena entering the final year of his contract, Moran has a chance to solidify his spot as the Astros' future at the hot corner. ... Francis Martes was one of the stories of 2015 as he jumped from Class A to Double-A in his age-19 season. The right-hander has become a top 50 prospect and will focus on bringing his changeup up to the levels of his fastball and curveball while hoping to add more innings after cracking triple digits for the first time.