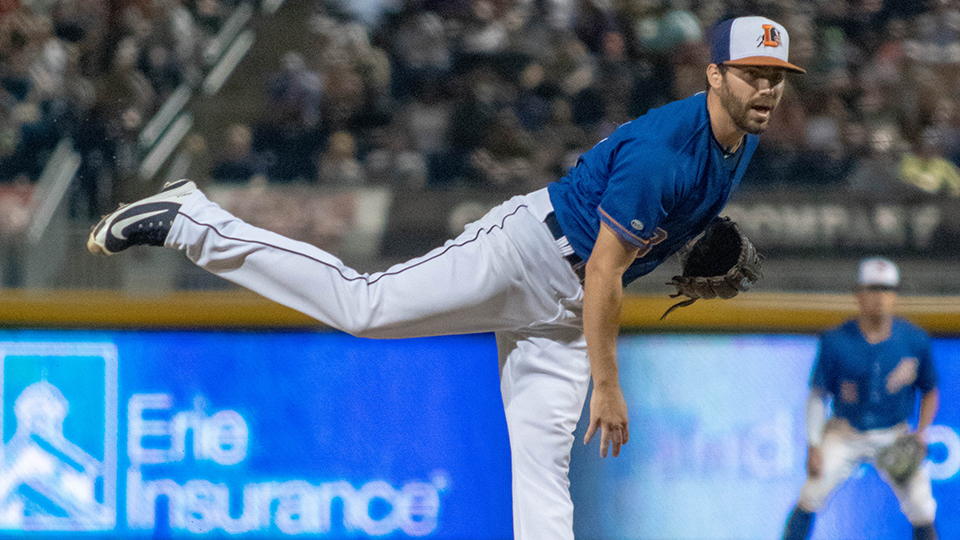 Austin Pruitt pitched past the fifth inning just once in his first 15 appearances for Durham this year. (Joseph Dwyer/MiLB.com)

Before Wednesday night, Austin Pruitt had started only two postseason games in his six-year professional career. Getting a crack at a third in Game 2 of the Governors' Cup Finals, he wound up on the winning side for the first time.

Pruitt allowed three hits and a walk while striking out five over six scoreless innings as Durham evened the International League Championship Series at 1-1 with a 5-2 victory over Scranton/Wilkes-Barre at PNC Field.

"The game plan was just to get ahead and stay ahead," the hurler said. "Nothing's really changed from the regular season to a playoff game. ... It was kind of a feel thing -- we were just reading swings and looking at approaches. It's just kind of reading whatever you see."

Pruitt (1-0) found plenty of success in the International League as a swingman this season, compiling a 2.95 ERA and 0.83 WHIP over 39 2/3 innings in 14 outings, including. He rode the shuttle back and forth between Durham and Tampa Bay for much of the year, sporting a 4.80 ERA with 38 strikeouts in 20 relief appearances with the parent club. He made one start in the IL semifinals and allowed three runs on six hits over 5 1/3 frames against Toledo.

Alhough Pruitt said he's comfortable pitching in all situations, getting a chance to start gives him some semblance of steadiness, at least in terms of preparation.

Before Pruitt even threw a pitch in Game 2, the Bulls grabbed the lead when former RailRider Rob Refsnyder blasted a two-run homer off Nestor Cortes (0-1) two batters into the night.

That support propelled the 29-year-old, who threw 53 of 79 pitches for strikes and faced four batters over the minimum. The biggest threat against him came with two outs in the first when Gio Urshela doubled to left and Ryan McBroom walked. But on one pitch, Pruitt got Mike Ford to fly to the wall in right.

"It was huge, we had gotten into a little trouble," Pruitt said of working out of the first. "We didn't find ourselves in too much trouble after that, so it was great that we were able to get out of that with no runs."

The RailRiders never had more than one baserunner in an inning the rest of the way against the University of Houston product, reaching scoring position one more time when Wilkin Castillo doubled to right in the fifth. He was stranded when Mark Payton grounded to second base.

With the Bulls leading, 3-0, Rays No. 13 prospect Nathaniel Lowe belted a two-run dinger to left-center in the ninth. Twenty-fourth-ranked Colin Poche pitched the final three innings for the save, allowing two runs in the ninth when Ford homered with two outs.

The Bulls sit two wins from a second straight International League title. Having been part of the 2017 championship team, Pruitt said the prospect of taking the crown again would be another neat feat.

"I haven't thought about it much, but it would be pretty cool," he said. "We're excited for the chance and the opportunity and we're going to try to make the best of it."

Cortes settled down after the first, yielding two hits and three walks with six strikeouts over six frames.

While the rest of the series will be played at PNC Field due to Hurricane Florence, Durham will be the home team for Game 3 on Thursday. Chih-Wei Hu is slated to start for the Bulls against Yankees No. 24 prospect Michael King.