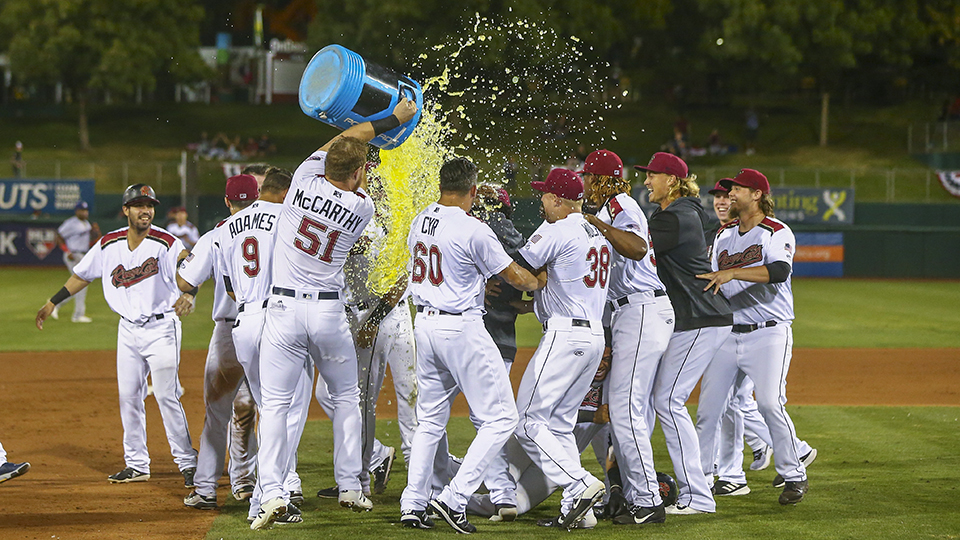 In a back-and-forth affair, Abiatal Avelino delivered the final blow for Sacramento.

The Giants' No. 27 prospect ripped a walk-off single with two outs in the ninth inning to give the River Cats an 8-7 win over Round Rock in Game 1 of the best-of-5 Pacific Coast League Championship Series on Tuesday at Raley Field.

"That was amazing," Avelino said. "I said if I had the opportunity, I'd make it."

Ronnie Freeman doubled to left field with one out in the bottom of the ninth and, after Levi Michael struck out, the 24-year-old shortstop knew it was his time to shine.

After swinging and missing at a first-pitch splitter from right-hander Ronel Blanco he took a fastball to even the count.

The River Cats leadoff man got the splitter from Blanco and bounced it through the hole on the left side of the infield. After Freeman scored, Avelino was mobbed by his teammates.

"That's what happens when you're positive," he said. "That was incredible."

The native of the Dominican Republic also singled and scored in the third. He's hit safely in all six postseason games and has an RBI in the last five.

Francisco Pena gave Sacramento a 7-6 lead in the eighth with a two-run homer off Express starter Kent Emanuel. Avelino thought it might stand up as the decisive blow.

"I enjoyed his homer a lot, even more than my hit," he said. "That was exciting."

Instead, Ronnie Dawson led off the ninth by depositing an 0-2 pitch from Steven Okert over the fence in center field to tie it at 7-7.

Pena went 4-for-4 with an RBI single in a three-run third for the River Cats. That 5-3 lead held until the sixth, when Dawson lifted a sacrifice fly and Chas McCormick mashed a two-run jack to put Round Rock in front, 6-5.

Game 2 is Wednesday in Sacramento.