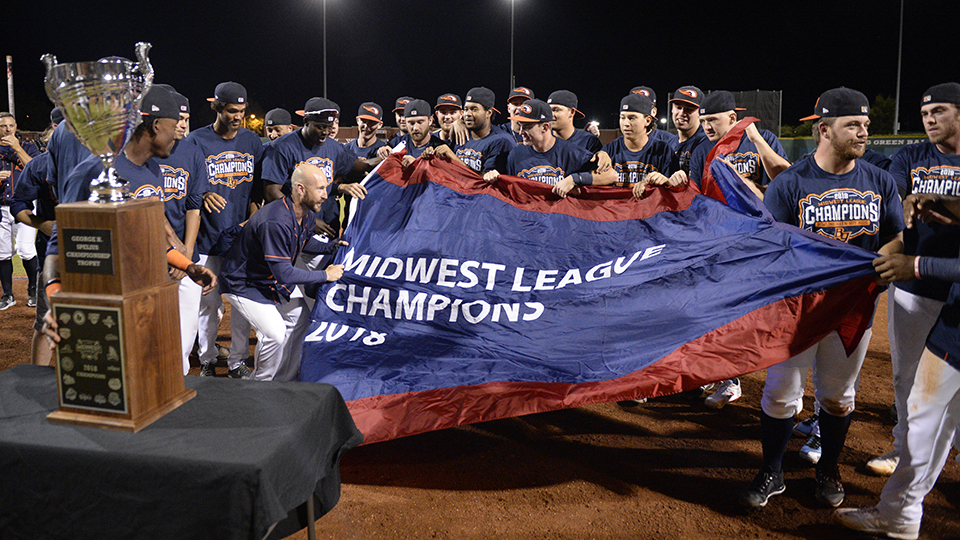 Bowling Green has been Tampa Bay's Class A affiliate since 2009. In five previous playoff appearances, the team accumulated one total postseason victory.

But 2018 was different, even from the beginning. The Hot Rods' 90 wins led the Minor Leagues and resulted in first- and second-half division titles. On Sunday, Bowling Green capped a record-setting campaign with its first championship after defeating Peoria, 7-2, in Game 4 of the Midwest League Finals.

"I'm just so proud of these guys, this staff," Hot Rods first-year manager Craig Albernaz said. "These guys are in such an early stage of their pro careers. To go out and grind for 140 regular-season games and the playoffs, it's really impressive. For these guys to never complain, to play every day, winning the first half, winning the second half, it's such a great accomplishment."

The scoring came early and often in the finale for Bowling Green. Rays No. 12 prospect Vidal Brujan led off the first ining with a walk and Moises Gomez doubled him home three pitches later with a line-drive double to center field off Chiefs starter Angel Rondon.

"It was huge," Albernaz said of the hot start. "It's big for [Bowling Green starter Paul Campbell]. You want to put up runs for him early. And we did that."

The Hot Rods pushed across five runs in the second with Brujan singling in a run and Taylor Walls plating him with a double. Trey Hair led off the third with a solo homer to right-center field to make it 7-0.

"We were trying to adjust and just have good at-bats," Albernaz said. "We were able to find some balls in the gap and score some runs."

Brujan began the season with Bowling Green and hit .313 in 95 regular-season contests with the club before being promoted to Class A Advanced Charlotte, where he batted .347/.434/.582 with four homers over 98 at-bats. The Dominican Republic native returned to the Hot Rods on Sept. 6 and provided a boost during the playoff push.

Nobody was happier to be penciling in Brujan's name at the top of the lineup card every day than Albernaz, who managed the 20-year-old in Class A Short Season Hudson Valley in 2017.

"The way he set the table for us is outstanding," the skipper said. "He gives you great at-bats and he's dynamic with his speed. To see the growth, he's a completely different player. He's matured so much. For him to keep his composure like he's been doing it for years, it's great to watch."

Campbell delivered five scoreless innings before Dennis Ortega's two-out, two-run double in the sixth accounted for Peoria's offense. The right-hander allowed two hits and walked one while striking out four over six innings.

"Paulie did a great job," Albernaz said. "He attacked with his fastball. He had his cutter and his slider going. They were coming out of the same tunnel as his fastball, so it was tough for them to recognize which pitch he was throwing."

The Hot Rods had a fresh bullpen for Game 4, the skipper said. The trio of Tyler Day, Jhonleider Salinas and Matt Seelinger delivered three perfect frames of relief to secure the championship.

"To win the first half and the second half, it's an up-and-down effort thorughout the whole roster," Albernaz said. "It was an amazing year."