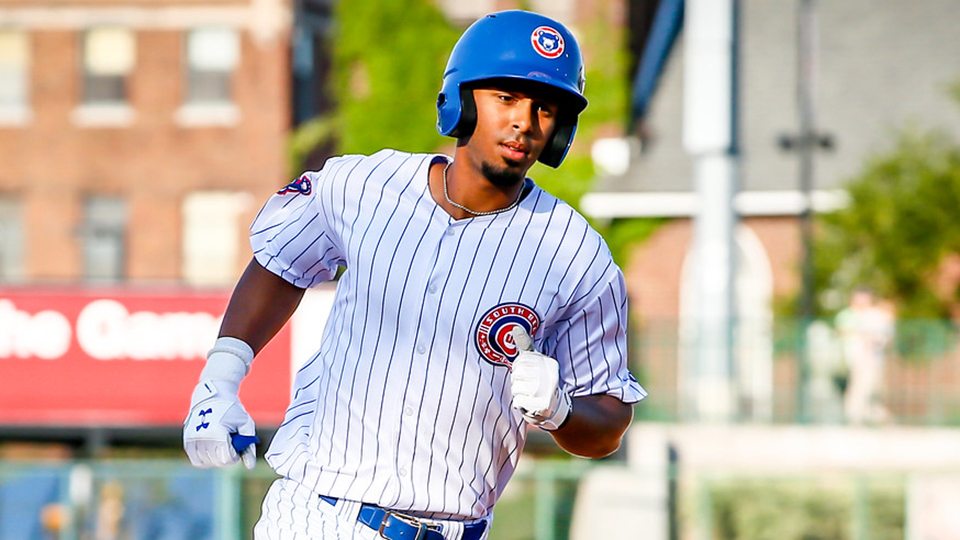 The year couldn't have ended much better for the Cubs' farm system. The organization's top prospect Nico Hoerner spent September in the Major Leagues and Class A South Bend went a perfect 7-0 in the Midwest League playoffs for its first trophy since becoming a Cubs affiliate in 2015.

But only six other organizations had a Minor League win percentage lower than Chicago's, none of which hit fewer home runs. So the Cubs last week restructured their player development department in an attempt to modernize the system. Craig Breslow, who spent 12 years as a player and earned a degree from Yale in molecular biophysics and biochemistry, was promoted to director of pitching. Justin Stone, a biomechanical hitting consultant for the club since last year, was named the director of hitting.

Beneath the retooled leadership is a crop of talent highlighted by two of MLB.com's Top 100 prospects in Hoerner (No. 47) and Miguel Amaya (No. 90), while potential contributors could ascend to the upper levels in 2020.

Catcher -- Miguel Amaya, Myrtle Beach (99 games): Chicago continued to push its second-ranked prospect with another bold assignment, and at age 20, he spent the season in the Carolina League. Although Amaya's batting average dropped 21 points from the previous season as he hit .235, the Panama native posted career highs with a .753 OPS and 122 wRC+. His 13.2 percent walk rate and 16.8 percent strikeout rate were improvements from 2018. The backstop started 91 games behind the plate and threw out 34.8 percent of would-be base stealers.

"He's sort of come into his own," Cubs director of player development Bobby Basham said. "He's transitioned into a leader on the field. You could tell from his presence and how excited he was pulling for his guys when they had success, which is a good thing to see from a younger player."

First baseman -- Jim Adduci, Iowa (105 games), Chicago (two games): The 2003 42nd-round pick returned to the Cubs organization for the first time since electing free agency at the end of the 2012 season. The reunion produced a .301/.338/.465 slash line with 12 homers and 58 RBIs in 359 Pacific Coast League at-bats, as well as a brief hitless stint in the Majors. No full-season player in Chicago's system had a better average than Adduci, who is 34 and a free agent once again.

"Vimael was coming off good Winter Ball, and man, just made himself into a tough out," Basham said. "Being able to put the barrel on the ball and put it in play with some authority, spread it out, be versatile -- I think he ended up with the 10th-highest OPS in the Southern League. Just a really good story for this guy to put himself on the map as a prospect and potentially help our big league club in the future."

Third baseman -- Phillip Evans, Iowa (130 games): Evans joined the Cubs as a Minor League free agent after spending the first eight seasons of his career with the Mets and went on to have his best year in the Minors since 2016. He led the system with 50 extra-base hits and 219 total bases as a mainstay in Iowa's lineup, batting .283 with an .841 OPS. The 27-year-old set a career high with 17 homers and matched his best mark of 30 doubles.

Shortstop -- Nico Hoerner, Arizona Cubs 2 (five games), Tennessee (70 games), Chicago (20 games): The 24th overall pick in the 2018 Draft enjoyed a fine season at Double-A Tennessee. Hoerner hit .284/.344/.499 with three homers, three triples, 16 doubles and eight stolen bases in 70 games and didn't let a broken wrist derail his first full campaign as a pro. But instead of making up for the lost time in the Arizona Fall League, the 22-year-old Stanford product was called up to Chicago to help an injury-riddled infield before ever seeing a pitch above Double-A. He batted .282 with a .741 OPS in 20 games as the first member of his Draft class to reach The Show.

"I think the constant story with Nico has been the guy has special makeup," Basham said. "He's a worker. He's a competitor. … I don't know of many guys who could have made their plans to show up in the Arizona Fall League, three weeks later get a call, get on a plane and show up and make their big league debut for a playoff-contending team and do as well as he did."

Brennen Davis, South Bend (50 games): Taken with Chicago's next pick after Hoerner, the 19-year-old began the year in extended spring training and was limited to 50 games in his first full season. The small sample was enough to show the potential of the No. 3 Cubs prospect's athleticism, as the 6-foot-5 former basketball standout compiled a .305/.381/.525 slash line with 10 stolen bases in 177 at-bats. Eight of his 20 extra-base hits were long balls.

"I think our thought process on the amateur side was this guy's going to be a slower build and his raw athleticism needed to be harnessed on a baseball field," Basham said. "But he made some adjustments with our hitting staff, really dug in, moved him off the plate a little bit, created some space, started to understand his body. It just clicked way quicker than we could have hoped for ... and we hope it's just the tip of the iceberg."

Edmond Americaan, South Bend (eight games), Eugene (66 games): A short stint in which he hit .160 for South Bend aside, the 2018 35th-round pick's first full season showed a strong all-around game. His .785 OPS in 255 at-bats slotted eighth among qualified hitters in the Northwest League. His 16 stolen bases ranked fourth, and only one player on the circuit topped his five triples, all of which came after July 1. Americaan batted .310 from that date on.

"If you look at just the last two months of the season, he was a different player," Basham said. "Most of it is just getting him to understand that he can do damage, get the ball in the air and sort get off his 'A' swing more often instead of being defensive. Once he got a feel for who he was at the plate, he really took off."

Zach Davis, Myrtle Beach (62 games), Tennessee (23 games): Despite a .333 on-base percentage, the 25-year-old led Chicago's system with 40 stolen bases. No other Cubs prospect had more than 31, and only 11 Minor Leaguers swiped more bags than Davis. He was caught stealing once in 12 tries after a July 11 promotion to the Smokies.

Utility player -- Robel Garcia, Tennessee (22 games), Iowa (76 games), Chicago (31 games): Garcia contends for one of the best stories in the Minors. He signed with Cleveland out of the Dominican Republic in 2010, was released in 2014, spent the next three years abroad with his wife, then caught the Cubs' eye when playing for the Italian national team against instructional clubs in Arizona last fall. In his first season back stateside, the 26-year-old led the organization this year with 27 homers and 78 RBIs, totals that could have climbed higher had Chicago's 26th-ranked prospect not spent all of July and September with the big league club.

"From the beginning, he was just really good," Basham said. "I think he got better throughout the season, adjusting to some of the tougher competition that he'd seen in quite a bit. Sort of forcing pitchers back in the zone and laying off some offspeed stuff that he maybe struggled with early."

"High spin-rate guy. Two above-average breaking pitches. I think he just dug in with our staff and our analytics guys to understand how that played together," Basham said. "It's all about tunneling and the locations where his pitches played best. I think he got comfortable with his approach and started to go out there and dominate guys. He led the Southern League in strikeouts from the start of the year to the finish. He was just really good. We're excited about his next year and the possibility of him being a potential depth piece as a starter for our big league club next year."

Left-handed starter -- Brailyn Marquez, South Bend (17 games), Myrtle Beach (five games): The fourth-ranked Cubs prospect sported a 2.70 ERA through his first seven starts. It rose by more than two runs over his next three appearances, but Marquez never allowed more than three earned runs in any game after that. The 6-foot-4 southpaw finished the year with a 1.71 ERA for the Pelicans to cap a season of 103 2/3 innings, a total nearly double his previous career high.

"This is a 20-year-old lefty still growing into his body," Basham said. "When he got locked in, there were some ace-like performances there. He needs to stay healthy, keep improving his command and build up his stamina. But this guy has as high a ceiling as anyone."

Reliever -- Ryan Lawlor, South Bend (nine games), Myrtle Beach (21 games): The 2015 eighth-round pick of the Braves spent time last year in the independent Frontier League before joining the Cubs in July. His second season with the club, Basham said, showed the power of a second chance. Lawlor posted four saves in four opportunities and a 1.95 ERA with 85 strikeouts and 26 walks in 55 1/3 innings overall. After moving up to the Carolina League in mid-May, lefties hit .143 and righties just .193 against the southpaw.

"Some of it is just opportunity," Basham said. "I think he had been kind of nicked up during his career. He had found a routine that worked for him. His performance at Myrtle Beach was just lights-out. Forty percent-plus [strikeout] rate from the left side. Dominant vs. lefties and righties. …We're excited about him and his future in the 'pen. It looks really bright."