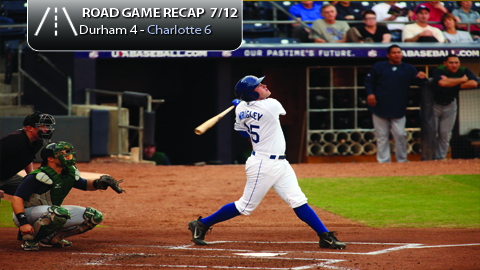 Fort Mill, SC --- With hopes of closing a seven-game gap in the South Division, the Durham Bulls dropped the opener of a four-game series with first-place Charlotte 6-4 on Thursday night.

The Knights (51-42) pounced on Bulls starter Jim Paduch (L, 4-7) thanks to a five-run first inning, sparked by a bases-loaded double by Dallas McPherson. In sum, the Knights sent 10 to the plate in a five-hit, two-walk opening salvo.

In the third, the Bulls placed runners at second and third with none out, but only managed one run on a grounder by Leslie Anderson. One inning later, Brandon Allen tripled into the right field corner to start the inning, but was stranded. Later in the sixth, the Bulls trimmed the 5-1 deficit to 5-3 with one out and runners at second and third, but again, stranded those two aboard against Shirek.

In the ninth, Chris Gimenez homered against Daniel Moskos to make it a 6-4 game. Matt Mangini singled, but Jesus Feliciano tapped to second base while Rich Thompson and Tim Beckham struck out to wrap up the game.

Paduch permitted five runs and eight hits over his five innings of work. Josh Lueke yielded the Knights' other run in the sixth on three hits. Brandon Gomes and Romulo Sanchez each pitched a scoreless inning.

With the defeat, the Bulls fell back into last place in the South, and trail the Knights by eight.