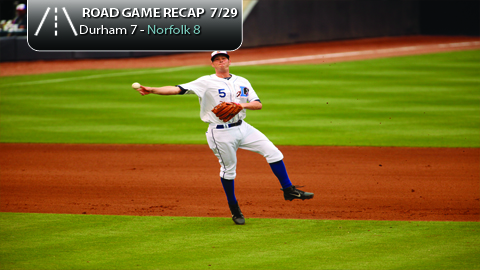 Norfolk, VA --- After spotting the Norfolk Tides a 6-1 lead after 1 inning, the Durham Bulls rally came up just short, falling 8-7 at Harbor Park on Sunday night.

After starter Alex Torres (W, 3-7) failed to get out of the first inning, the Bulls charged back against the Tides (55-55) and put the tying run at third in the ninth before Pat Neshek fanned Jesus Feliciano to close out the series-evening win.

The Bulls took a 1-0 lead in the first against Jason Berken (W, 3-4) when Rich Thompson tripled to center on the game's second pitch, then scored on a deep fly to the left field wall by Evan Longoria.

In the bottom of the first, Torres' 48-pitch adventure began. After retiring the first batter, Torres hit Nate McLouth with a 1-2 pitch, then stole second base before a run-scoring single by Steve Tolleson. Joe Mahoney then doubled to left-center to score Tolleson for a 2-1 Tides lead. After a strikeout, Torres walked two before a three-run double by Brandon Waring made it 5-1. When Jamie Hoffmann walked as the ninth batter of the frame, Torres was removed. Matt Torra entered to allow a run-scoring single before retiring McLouth on a foul popup to end the first with the Bulls trailing 6-1.

The Bulls strung four of their 15-hits together with two outs in the second inning to cut the deficit to 6-3. Reid Brignac collected the first of his three hits, followed by a single by Will Rhymes. Feliciano singled home Brignac, with Thompson singling to left to score Rhymes.

Trailing 8-3 in the sixth, Leslie Anderson and Stephen Vogt each doubled down the left field line to make it 8-4. Brignac then singled, followed by a sac fly by Rhymes to trim the Tides' lead to 8-5. After Oscar Villarreal relieved Berken, Beckham grounded a single to right to score Brignac.

In the ninth, Leslie Anderson singled against Neshek with one out, then Brignac and Rhymes stroked hits to bring Anderson in and putting the tying run at third. However, Neshek fanned Feliciano to close out the game, dropping the Bulls (51-59) 11 behind first place Charlotte and four behind the Tides for second place.

Thompson went 3-4, and is now 7-9 in the series. Brignac was 3-5, with Anderson, Vogt and Rhymes each delivering two hits apiece. Longoria went 1-3 with an RBI, walk and sac fly.

Lance Pendleton will start the third game of the series on Monday night at 7:15 PM ET against Brian Matusz.