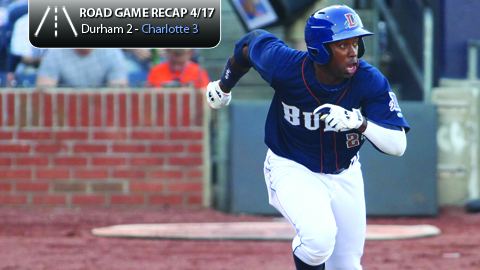 Fort Mill, SC --- Greg Golson singled home the tie-breaking run in the 7th inning to lift the Charlotte Knights to a 3-2 win over the Durham Bulls on Tuesday afternoon from Knights Stadium.

Ray Olmedo led off the frame with a single, his third hit of the game. Olmedo was sacrificed to second and then scored on Golson's soft single to right-center against reliever Romulo Sanchez (L, 0-1).

The Bulls (6-7) spotted the Knights (6-7) a 2-0 lead in the first on a two-run homer by Dallas McPherson, but immediately tied the game in the top of the second. Leslie Anderson doubled against the left field wall to start the inning, and one out later Kyle Hudson singled him home to cut the deficit to 2-1, with Hudson advancing to second on the throw home. With two down, Hudson broke for third, attracting a throw from Hector Gimenez, which sailed down the left field line for an error allowing Hudson to score the tying run.

The Bulls misfired on a couple of mid-game chances to move ahead. Tim Beckham tripled with one out in the fourth, but the Bulls could not cash in, then in the sixth, the Bulls wasted a bases loaded, one out situation. Matt Mangini and Anderson singled, and after a sacrifice bunt, the Knights brought in reliever Wes Whisler to face Hudson. With the infield in, Hudson grounded to McPherson at third, who held Mangini at third base, but then threw too high at first base for an error to load the bases. Whisler rebounded to strike out Shawn O'Malley. The Knights brought in Deunte Heath (W, 1-0) to face Craig Albernaz, and fanned him to strand the bases loaded.

The Bulls are 1-5 on their current 14-game road trip, and fell into a second place tie in the South with the Knights.

Anderson had three of the Bulls' eight hits to pace the attack. Anderson now leads the International League with a .475 batting average.

The series continues before another Kids Day crowd on Wednesday at 11:15 AM from Knights Stadium with Chris Archer (1-1) starting against lefty Charlie Leesman.