Cubs walk off with 2-0 series lead 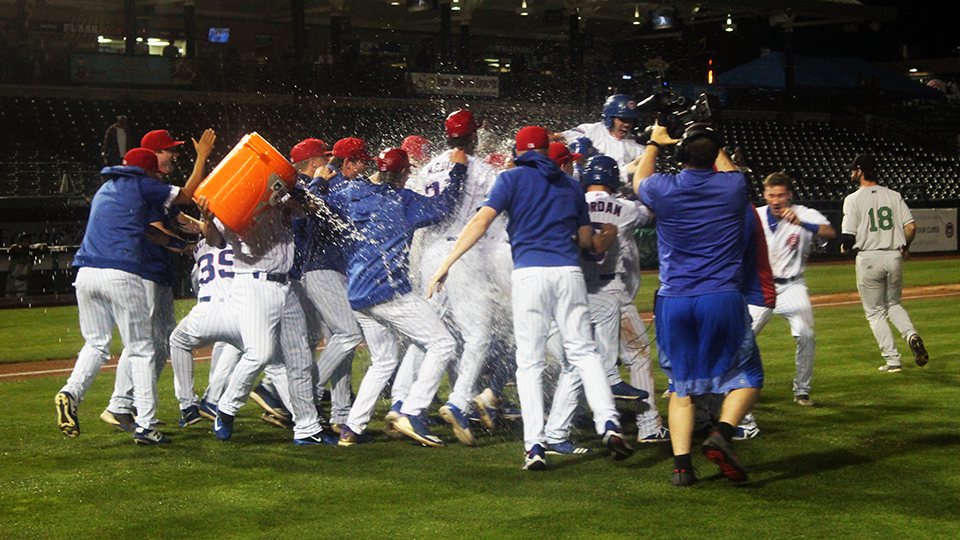 South Bend is one win away from its first Midwest League championship since 2005. (South Bend Cubs)

Members of the South Bend Cubs filed into their clubhouse when severe weather hit Four Winds Field after nine innings of Game 2 of the best-of-5 Midwest League Championship Series. Tied at 2-2 with Clinton, they sat in relative silence during what would be a 98-minute rain delay.

The 19-year-old from Santa Clarita, California, walked over to the sound system and cranked up "We Dem Boyz" and started dancing, with some teammates joining in.

Shortly after the Cubs and LumberKings returned to the field at 12:10 a.m. CT, Roederer had his teammates dancing again when he scored the winning run on a wild pitch in the 10th inning as South Bend walked off with a 3-2 win and a 2-0 lead in the series.

After a travel day, the Cubs will try to clinch their first championship since 2005, while Clinton will be looking to pull off a three-game sweep for the title.

"That's our song," said Roederer, the Cubs' No. 6 prospect. "Every time we win, we play that song. I pumped it up as loud as it could go. A couple of us were dancing around, trying to get our spirits up, because in that rain delay, we just didn't have it. It was very quiet."

After South Bend shut down Clinton in the top of the 10th, 21st-ranked prospect Nelson Maldonado led off the bottom half with a single and took second on a sacrifice by Jake Slaughter.

Roederer angrily tossed his bat when he was intentionally walked with first base open, then went through a range of other emotions. Marcus Mastrobuoni lined a single to right field, but Maldonado was thrown out at the plate by Thomas Jones. Roederer reached third on the play and dashed for the plate when reliever Peyton Culbertson uncorked a wild pitch.

"When I'm on the basepaths … I'm just as lethal as when I'm at the plate," Roederer said. "As soon as that ball was out, I knew I was going for it. There was nothing that was going to stop me. I would have laid [the catcher] out if I had to."

Roederer, a 6-foot, 175-pound left-handed hitter, was taken in the second round of last year's Draft. He struggled during the first half of the season with South Bend, hitting .218. In August, he surged, hitting nearly .256.

"Cole is one of our most improved players," Cubs manager Buddy Bailey said. "He led us in RBIs, and he probably saves us 40 or 50 runs in the outfield with the catches that he's made to save doubles and triples. To me, Roederer has been a 90- to 100-plus run guy for our ballclub when you add the defense with the offense."

According to Bailey, Roederer was impatient at the plate and rarely walked.

"[Cole] stood too erect in the box," the veteran skipper said. "He's spread out a little bit now, which has helped him see pitches better. He's collected a lot more walks and cut down on the strikeouts because of that and pitch identity. He's not as much as a free swinger.

"One of the biggest pluses is his swing path is a lot better. It's more direct to the ball, where it was big and loopy. Therefore, he had to cheat early, which made him really vulnerable to changeups. He's really started coming on since mid-July."

Delaying his hands, eliminating a big leg kick and focusing better at the plate has turned Roederer into a difference-maker for South Bend. Getting to that point, though, required resilience.

"It was tough mentally, to constantly fail and know you could do better, to know that I could do this and then fail," Roederer said. "Then August came around and we figured some stuff out and my battering average shows.

"Being 19 and come out here, the Cubs let me go a full season, and they haven't done that in a long time. I always felt I had something to prove. Later in the season, I started to prove myself defensively and offensively, so I think there's a very, very high level that I haven't even reached yet."

Bubba Hollins went 3-for-4 with a run-scoring double for the LumberKings, while Marlins No. 29 prospect Peyton Burdick forced extra innings with a two-out RBI single in the ninth.