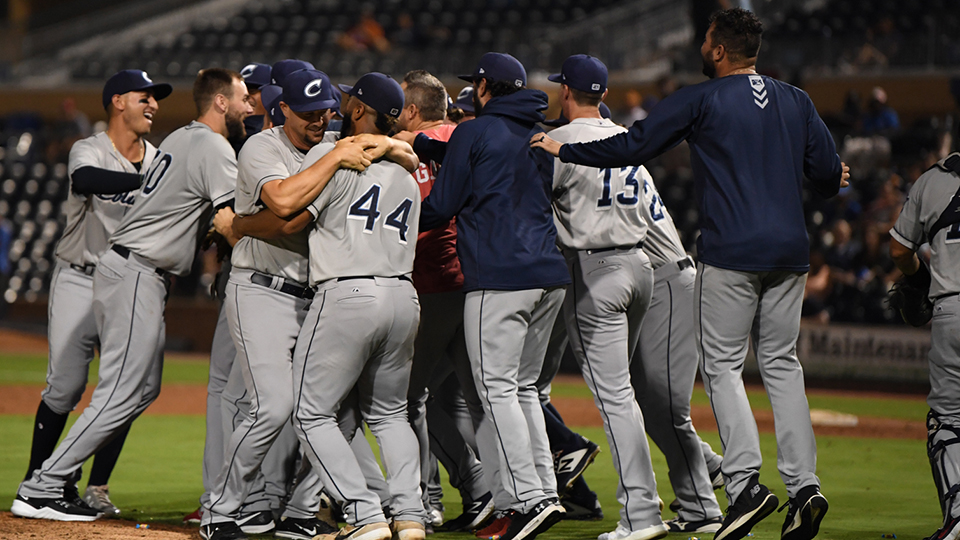 DURHAM, N.C. -- One powerful swing was another example of Bradley Zimmer looking more and more like a big leaguer again.

The Indians outfielder -- more than a year removed from shoulder surgery -- hit a go-ahead three-run homer in the sixth inning as Columbus captured its 11th Governors' Cup by completing a three-game sweep of Durham with a 6-2 victory on Thursday at Durham Bulls Athletic Park.

"Big situation, I was ready and I wanted it," Zimmer said. "I got that one."

The Clippers broke a tie with Rochester for the most International League championships and became the second team to win four Governors' Cups in the same decade, denying the two-time defending champion Bulls a chance at that distinction. Columbus last won in 2015.

Zimmer has progressed through three Minor League levels during the past month while rehabbing. His homer came on a full count against reliever Aaron Slegers (0-1) and hit right above the 395-foot marker in straightaway center field. It was his first long ball in seven postseason games.

"That was the old him right there," Clippers manager Tony Mansolino said. "That's the first time we've seen catch up to a fastball like that."

Zimmer had surgery on his right shoulder in July 2018.

"It has been a long year," he said. "[Winning a title] is fun, no matter what. Hopefully, I can go back up [to the Majors], take this winning momentum up there."

The Clippers had the best record in the IL this season and kept rolling in the playoffs by winning six of seven games. The run came amid significant roster upheaval.

"Good players," Mansolino said. "If you're going to have that many players come in and out, you've got to have good players to do this."

Winning the Cup was the best possible outcome for Columbus shortstop Andrew Velazquez, who began the season with Durham.

"I got one of those [with the Bulls from last year]," he said of a championship ring. "I want one of these."

Columbus starter Mitch Talbot walked the bases loaded in the second inning, but left fielder Ka'ai Tom made a diving catch to rob IL batting champion Jake Cronenworth of a hit to end the threat.

Tom went 2-for-4 with his third homer in four games and was named playoff MVP.

"You go out every day to do your best and to contribute," he said, noting it's his first postseason individual award.

Talbot, a 35-year-old right-hander who began the season in independent ball, allowed one run despite issuing seven walks and giving up two hits in 4 2/3 innings. He pitched for the Bulls from 2007-09.

Durham grabbed its first lead of the series on Kevin Padlo's two-out RBI single in the third.

After Zimmer's shot, Daniel Johnson led off the seventh with his first playoff homer to stretch the lead to 4-1. Tom cranked an opposite-field two-run blast over the left-field wall later in the inning.

Reigning American League Cy Young Award winner Blake Snell made another rehab start for the Bulls and retired all six batters he faced, striking out three. He underwent arthroscopic surgery on his left elbow on July 29.

Slegers, whose late-season work helped Durham reach the playoffs, gave up homers on three of the seven hits he allowed over 4 2/3 innings.

"He was our best pitcher down the stretch and he earned the right to be out there," first-year Bulls manager Brady Williams said. "The three-run homers are what did us in this series.They hit them and we didn't."

Jason Coats belted his fourth postseason homer leading off the bottom of the seventh for the Bulls, who stranded 14 runners. They loaded the bases with two outs in the eighth, but Jon Edwards came on and struck out Coats.