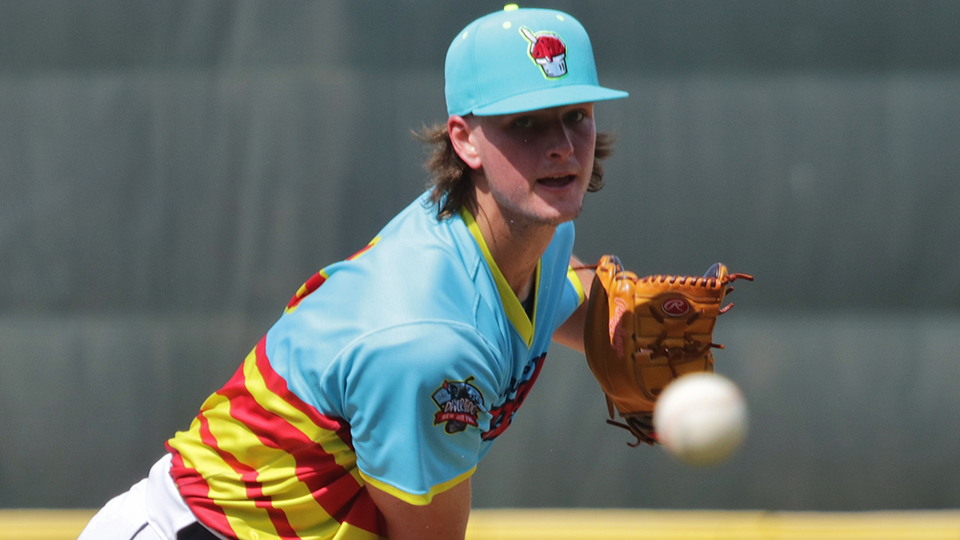 Forrest Whitley has struck out 15 batters over his last two starts in the Texas League. (Tammy Tucker/MiLB.com)

Forrest Whitley's winding path back to the precipice of the Majors reached another checkpoint Thursday night -- his first Double-A win.

Houston's No. 2 prospect matched season highs with nine strikeouts and five innings pitched, allowing two runs on three hits to guide Corpus Christi past Arkansas, 4-2, at Dickey-Stephens Park. He walked four batters, but shaved more than a run off of his Texas League ERA, bringing it down to 6.46.

Whitley (1-2) walked the first two batters of the game before top Mariners prospect Jarred Kelenic drove them in with his first Double-A triple. But the right-hander settled in to strand Kelenic on third with three straight strikeouts that included five swings-and-misses.

The 21-year-old faced the minimum over the next two innings with two of the next six outs coming on the basepaths. Seattle's No. 10 prospect Kyle Lewis led off the fourth with an infield single, but only advanced to second on Mike Ahmed's two-out single. Whitley retired Nick Zammarelli III on strikes to escape the threat, then added two more punchouts in a 1-2-3 fifth.

MLB.com's No. 17 overall prospect threw 49 of 88 pitches for strikes, both season highs. Whitley has struck out 25 batters in 15 1/3 innings with the Hooks as he returns to the form that slotted the 2016 first-rounder into the Opening Day rotation at Triple-A Round Rock.

After recording a 12.21 ERA in 24 1/3 innings with the Express while dealing with right shoulder fatigue, Whitley landed on the injured list in late May. He returned July 12 with two appearances in the Rookie-level Gulf Coast League and Class A Advanced Carolina League. In the last of those four starts, Whitley tossed five innings of one-hit ball for Fayetteville and "had it all kinda [come] together."

Osvaldo Duarte helped dig Whitley out of his early hole, plating Corey Julks with an RBI triple in the fourth. Duarte and Colton Shaver knocked in runs in the sixth to give Corpus Christi the lead and put Whitley in line for the win. Duarte also scored the game's final run in the eighth, stealing third and crossing the plate on a throwing error by catcher Cal Raleigh.

Colin McKee and Willy Collado whiffed two apiece as they split the last four scoreless innings on the mound for the Hooks. The former did not allow a hit. The latter picked up his fourth save, letting up two hits without a walk.