No. 4 Red Sox prospect strikes out 10 over five shutout innings 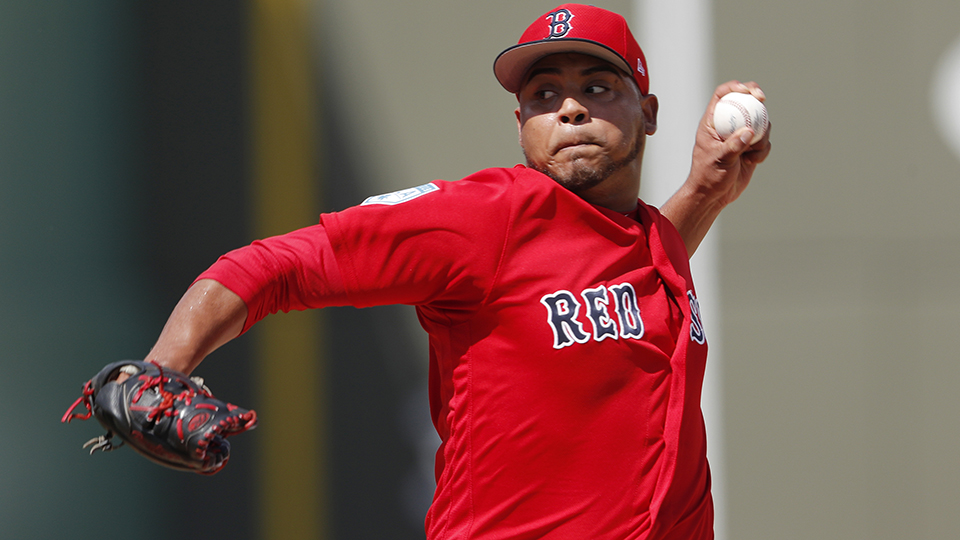 There has been some debate within the Red Sox organization whether Darwinzon Hernandez should be a starter or reliever. The 22-year-old may have tipped the scales with Sunday's performance.

The fourth-ranked Boston prospect matched his career high with 10 strikeouts over five innings, yielding a pair of hits and four walks in his first Double-A start as the Portland blanked Reading, 6-0, at Hadlock Field.

"He showed me a lot," Sea Dogs pitching coach Paul Abbott said. "He had a lively fastball that, except for a few lacks of focus, he commanded very well. He showed the ability to pitch to both sides of the plate and his fastball-slider mix was his deadliest weapon. He also flashed a top-to-bottom curveball against the lefties, and he competed extremely well from start to finish. He touched 97 mph against his final batter and that's exactly where it was when he started, and he never backed off.

"As a big lefty with a power arm, he'll always be a valuable commodity as a bullpen option. But you really don't find too many starters with his stuff -- and he's got a developing changeup that's coming along well -- so I think he provides lots of value in a starting role as well."

The left-hander is coming off an eye-opening big league camp in which he made six appearances (two starts) and limited opponents to a .182 average while giving up a lone run over 11 Grapefruit League innings.

"I think he finished last year strong and then the Fall League was a big positive in his development, so he came into spring with confidence," Abbott said. "And he's a guy that doesn't back off. He went in there with a world-champion team, a bunch of superstar veterans, and he just went about his business and did what he does. He showed what he could do without trying to do more and that's a huge testament."

On Sunday, the 6-foot-2, 245-pounder opened the game by striking out the side on 10 pitches, getting Phillies No. 3 prospect Adam Haseley swinging over the top of a 1-2 heater. Hernandez (1-0) issued a four-pitch walk to Henri Lartigue with one out in the second and allowed a base hit to Ali Castillo before escaping the jam by inducing Luke Williams to line into a double play.

The only other hit Hernandez yielded was a single by Grenny Cumana to lead off the third. Then the Venezuela native locked in and retired six of the next seven batters, five via punchouts.

After recording the first out in the fifth, Hernandez issued back-to-back walks before striking Haseley and ninth-ranked Mickey Moniak, both for the third time.

"He's a young power pitcher, so walks are gonna happen. But it's just a lack of focus. That will get better," Abbott said. "But to give up back-to-back walks there and not let it snowball tells me a lot about his character and makeup. He didn't back off or get shaken up, he went right back after guys and finished the inning without any further damage.

"As long as he's here -- and he's flashing the stuff that he's been flashing -- he's gonna start. We're going to continue to develop him as a starter, and get him the experience here that he needs right now."

The only other time Hernandez recorded 10 strikeouts was last July 8 when he threw 5 2/3 hitless frames for Class A Advanced Salem in the Carolina League.

Right-hander Andrew Schwaab allowed a hit while fanning four over the next two innings before No. 12 Red Sox prospect Durbin Feltman and Matthew Gorst finished up with a hitless frame apiece.

No Reading player made it past second base and the 17 strikeouts were the most by Portland pitchers since April 5, 2013 against Trenton.

Third-ranked Red Sox prospect Bobby Dalbec got the scoring started for the Sea Dogs with a solo homer to left field off left-hander Bailey Falter in the second. He finished with three hits, a pair of RBIs and two runs scored, while No. 9 prospect C.J. Chatham doubled and scored once. Jantzen Witte added three hits, including a two-run homer, and crossed the plate twice.