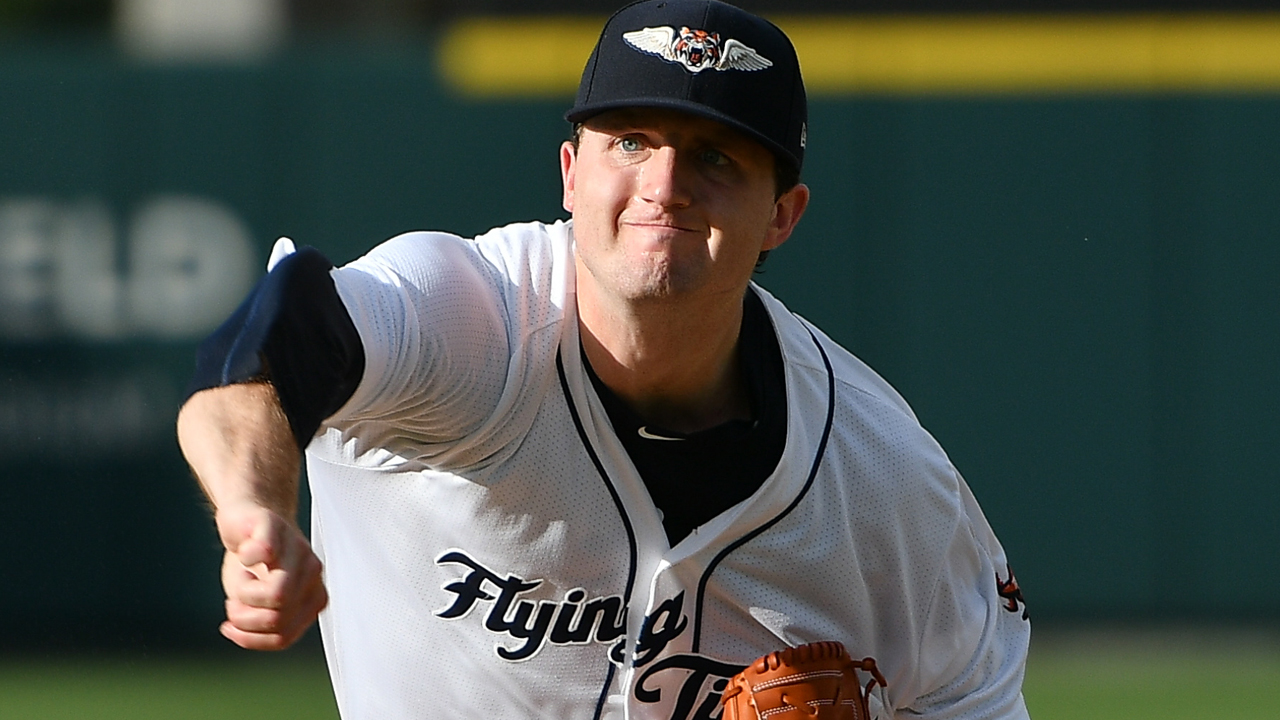 In the first Opening Night start of his professional career, Casey Mize reintroduced himself to Tigers fans on an emphatic note.

MLB.com's No. 17 overall prospect allowed one hit and struck out eight without issuing a walk over five scoreless innings, his longest appearance as a Minor Leaguer as Class A Advanced Lakeland walked off with a 4-3, 10-inning win over Tampa on Thursday.

Mize had a perfect game through four frames, fanning seven of the first 12 batters he faced. First baseman Steven Sensley was the only Tarpon to reach base against Mize, doing so with a two-out single to left field in the fifth inning. The top Tigers prospect rebounded by getting Donny Sands to fly to center to close his night. He threw 47 of 68 pitches for strikes.

"We tell the players not to worry with which town they start their season," Lakeland manager Andrew Graham told The (Lakeland) Ledger on Wednesday. "Just go about your business the right way, play hard and make the numbers move you to the next level. So Casey will start here and if he performs well here, the powers in the Detroit Tigers organization will move him. Of course, the same is true for any of our pitchers. If they show consistent performance at a high level, they too will be moved."

Mize pitched in only five games -- all in Florida -- after the Tigers selected him first overall in last year's Draft. After debuting in the Rookie-level Gulf Coast League, he vaulted over Class A to Lakeland, where he finished the season with four starts. Coming off a college season in which he threw 114 2/3 innings, the right-hander's workload was limited to 13 2/3 professional frames. His longest outing was 3 1/3 innings on Aug. 11 at Palm Beach.

"With Minor League Baseball and with life itself, it's about development," Graham told the newspaper. "People who want to succeed want to continue working at areas where they are good. But all of us need to step out of that comfort zone and work on our weaknesses."

Tarpons starter Clarke Schmidt matched Mize inning for inning. The No. 5 Yankees prospect threw five hitless frames and struck out nine without a walk. His line included a four-strikeout inning when the righty fanned Brock Deatherage to open the fourth, only to have the Flying Tigers leadoff hitter reach on a throwing error on catcher Sands. He rebounded by punching out the next three batters.

"I think early on the big thing for me was to just stay within myself and throw a lot of strikes," Schmidt said. "I knew that it was the first game under the lights and good for me just to attack the zone. Getting out of Spring Training, you kind of catch yourself trying to fight yourself to get out of a lull. Sometimes toward the end of Spring Training, it's a grind. To come out for opening week, it was a lot of fun, and I had a lot of adrenaline going tonight. To get under the lights and under my first full-season game, it was fun to say the least."

Tweet from @ClarkeSchmidt: That was fun @Casey_Mize ! Best of luck the rest of the way!! https://t.co/CibY79NijA

Schmidt went to New York with the 16th overall pick in 2017, a month after undergoing Tommy John surgery, and like Mize is entering his first full season. He pitched eight games last season between the GCL and Class A Short Season Staten Island, but Thursday felt different.

"Really, it's just to be able to go back out there and compete again," he said. "Something that I know is the biggest thing for my advancement through the Minor Leagues is my fastball command. I know I have the off-speed command and the stuff to back it up. It's just continuing to progress with that fastball command. If I can continue to go out there and throw strikes and keep the walks down and get a lot of ground balls, especially with how my sinker and the two-seam have been working for me, it'll be a fun year."

A former Southeastern Conference foe of Mize at South Carolina, Schmidt never matched up with him head-to-head in college but pitched in the same series when the schools clashed in 2016. Tampa's starter had some extra motivation for his Opening Night assignment from the moment he learned who his opponent would be.

"I was pumped," Schmidt said. "I obviously figured ahead of time that he probably would be starting Opening Day for them. My brother [Clate Schmidt] is in the Tigers organization, and he let me know that he was starting earlier in the week, so I got real pumped. It helped my adrenaline going against a guy like that. It's always fun to be able to duel against someone who's a strike thrower and just always goes out there and competes."

After their shared no-decision, Schmidt and Mize got a chance to reminisce briefly.

"We ran into each other after the game and just talked about how that was a fun little matchup," Schmidt said. "Hopefully, we'll be able to match up in the near future again."

That meeting could come in the Major Leagues before long.

Lakeland's Daniel Reyes forced extra innings with a two-run homer in the ninth and Brady Policelli singled home Zac Shepherd with the winning run in the 10th.