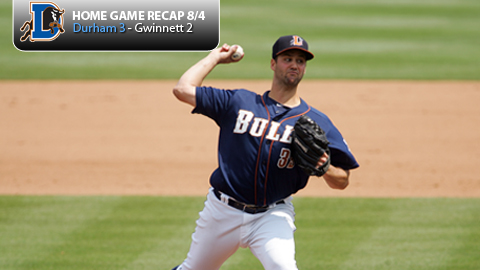 DURHAM, NC - Matt Torra led the Bulls past the Gwinnett Braves on Saturday night at the DBAP, guiding Durham to a 3-2 victory in front of 9,414 fans. The Bulls have now won four consecutive contests and five straight in front of their home crowd.

The game got off to a quick start, with the Braves taking a 1-0 lead in the first. Luis Durango led off with a single and worked his way around the bases until Ernseto Mejia brought him home with a sacrifice fly.

Torra (W, 9-6, 4.26) remained composed and worked effectively through the Braves order, earning his team leading 9th win of the year. He tossed 6.0 innings allowing 2 R/ER on 6 hits, walking three and striking out two.

The former first round draft pick was given a three run lead in the bottom of the second inning. With two aboard and one out, Bulls second baseman Cole Figueroa snuck a single through the right side allowing the Bulls to tie the game up at one all. The following batter, Jesus Feliciano, put the Bulls on top with an RBI single. He would later come home from third base on a Julio Teheran wild pitch, a run that would prove to be the difference in the game.

Teheran (L, 6-6, 5.12) kept the Bulls at bay for the remainder of the game, but it was not enough as he suffered his 6th loss of the year. Brandon Gomes converted a five out save opportunity, securing the Bulls' 3-2 victory.

Gwinnett and Durham conclude their final four game series of the 2012 season on Sunday evening at 5:05pm. The Bulls will send out LHP Cesar Ramos (4-3, 2.17) to the hill to take on LHP Sean Gilmartin (0-1, 3.86). Following the game, Kids Run The Bases thanks to Pepsi.