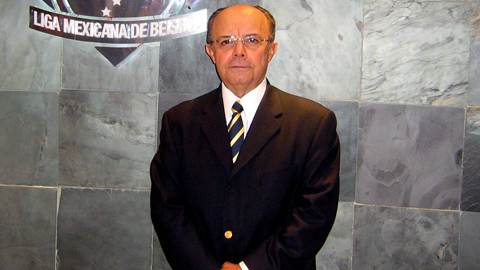 ST. PETERSBURG, Fla. -- Minor League Baseball™ announced today that it has selected Mexican League President Plinio Escalante as its recipient of the 30th annual Warren Giles Award, which honors outstanding service as a league president. Escalante is the first Mexican League president to win the Giles Award and just the third from a foreign-based league in the award's history.

This year, Escalante diffused a potentially tough situation involving World Baseball Classic players from Mexico that allowed them to represent their country in the 2013 tournament. For the third year in a row, he also directed three successful campaigns for the league, "Ponchemos el Cáncer de Mama" against breast cancer; "Ve Bien, Ve al Beis," for children with vision problems; and "Un Hit, Un Árbol," an ecological campaign, as part of his vision to get the league more involved with social issues affecting the communities of his clubs.

"Plinio has done an outstanding job since taking over as president of the Mexican League in 2007," Pat O'Conner, President & CEO of Minor League Baseball, stated. "He has successfully guided the league through difficult times and has spearheaded its efforts to become more socially responsible in the cities its clubs call home."

"I am very happy and honored to have received this award and grateful that the Mexican League is taken into account to participate in these awards of Minor League Baseball," Escalante said.

The Mexican League has attracted more than 3.8 million fans the last two seasons, since Escalante, despite a challenging economy, returned the league to a full complement of 16 teams. The circuit operated with 14 clubs in 2011. He has also overseen development of the league's website and intellectual property program.

Escalante, who began his baseball career in 1973 as the general manager of the Yucatan Lions, will receive his award at the Baseball Winter Meetings™ Banquet at the Walt Disney World Swan and Dolphin Resort in Orlando, Fla., on Thursday, Dec. 12.