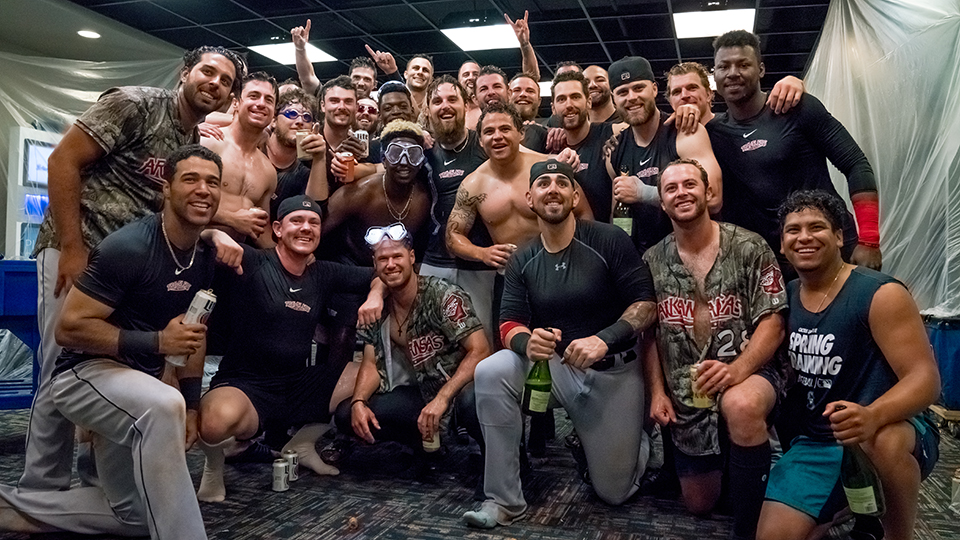 Donnie Walton said Double-A Arkansas teammate Evan White hits some of the hardest line drives he's ever seen. Opposing pitchers are discovering just how hard those liners can be.

The fourth-ranked Mariners prospect homered in his third straight game, going 3-for-5 with two RBIs, a walk and two runs scored as the Travelers clinched the Texas League North Division first-half title by defeating Tulsa, 11-7, on Sunday at ONEOK Field.

"I've played with him now for two years and he still surprises me by how hard he hits the ball," Walton, the Mariners No. 29 prospect, told MiLB.com on Friday.

For White, it's simply how he was raised.

"My dad always told me to try and hit the ball hard and whatever happens after that happens," he said. "I do the best I can to hit the ball as hard as I can and stay within myself, not try to get too excited and try to hit it 100 mph every time."

White started the day with a single through the hole on the left side in the opening inning before smacking the first pitch he saw from right-hander and No. 20 Dodgers prospect Edwin Uceta over the left-field wall for a two-run homer in the second.

A single to left-center in the third was followed by a six-pitch walk against righty Ryan Moseley in the fifth. White, MLB.com's No. 86 overall prospect, scored one batter later as M's No. 14 prospect Jake Fraley homered to right to give the Travelers a 10-0 lead.

It is the first time in his three-year career that White has homered in three straight games. He accomplished the feat of two games twice, both against Stockton on Aug. 7-8 and then on Aug. 21-22 as a member of California League's Modesto club. White looked at those games to see what he was doing and make a couple of adjustments.

"I was in a more consistent position," he said.

"The biggest thing has been my timing. I had a tough time finding it this season. I haven't been fouling as many pitches off in this series, which is the biggest thing. It all comes down to timing and sticking with my approach."

White pointed out that even the position of a hitter's backside goes into a good at-bat.

"Being quiet with my hands and sitting my right butt cheek," the native of Ohio said. "That allows me to shoot the ball better and not miss as much."

At 40-21, the Travelers own the best record in the Texas League. Manager Mitch Canham let his players celebrate but said he'll quickly put the first-half title in the rearview mirror.

"I couldn't be more proud of these guys," he told local media after the game. "In that room right now, it's a lot of brothers getting together, enjoying each others' company. They've fought real hard thus far, but there is still a lot to do. They've earned this opportunity to smile and enjoy each other. Tomorrow, we wake up and we go back to work."

White echoed his manager's statements, adding that the chemistry in the locker room has made it enjoyable.

"We are still chasing our goals individually. ... As a team, to win the first half is a great accomplishment, but we would like to do it at the end of the season as well," he said. "This is a group of guys that push each other on and off the field and that leads to better guys and better ballplayers."

Fraley homered twice and drove in three runs, while No. 15 prospect Dom Thompson-Williams went 3-for-5 with a pair of doubles and a run scored. Jordan Cowan and Nick Zammarelli III also went yard.

Andrew Moore (1-0) picked up his first win over the season, allowing four runs on three hits and a walk while striking out four over 5 1/3 innings.