AquaSox making most of long-term sponsorship deal with Funko 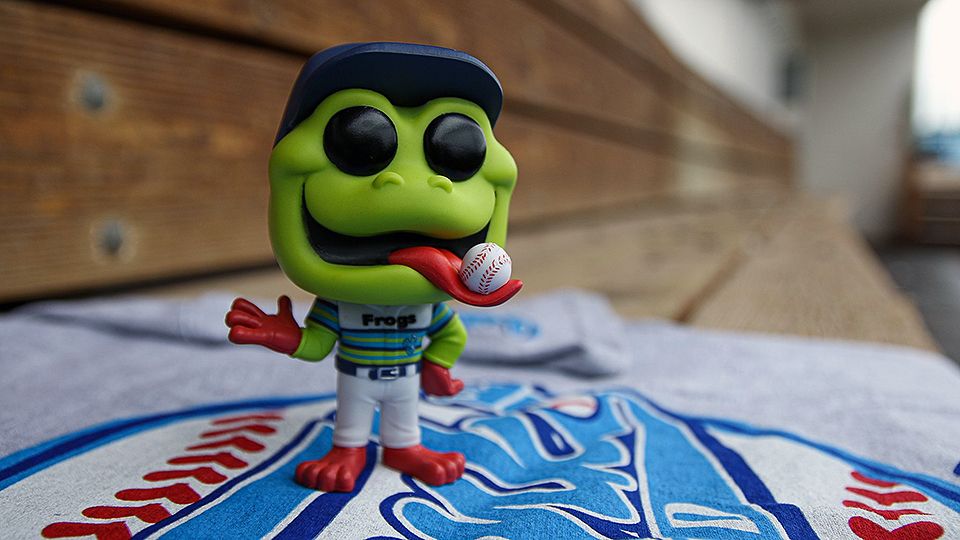 Minor League Baseball is billed as a family-friendly outing at the crossroads of entertainment and Americana. Regardless of where the game is played, nine innings of fun and food spent with familiar faces are the stuff of memories.

And it's the "fun" part where Class A Short Season Everett is feasting.

Last March, a ballpark naming rights agreement came to fruition with Funko, a manufacturer of pop-culture collectibles. A local company, Funko is paying $1.1 million over six years (with options to extend an additional three years) to brand Funko Field at Everett Memorial Stadium.

The Funko deal came about because of something closely associated with the Pacific Northwest: rain. Unusually wet weather during spring 2017 washed out the Everett High School baseball team's home slate at the shared facility, which opened in 1947. Everett Community College was able to play only two of its 23 scheduled games at the venerable ballpark that same season.

Enter the ingenuity that often defines Minor League organizations. In July 2017, an amended license agreement between Snohomish County, the AquaSox and the Everett School District (which owns the 73-year-old venue) brought everything under one umbrella. The MiLB club would install artificial turf if it were allowed to sell naming rights, and the school board would have final approval of a sponsorship agreement.

Everett-based Funko and the AquaSox have proven to be a match for collectors.

"We approached Funko," AquaSox general manager Danny Tetzlaff said. "We made a significant financial contribution to the school district to help make the transition from natural grass to the state-of-the-art artificial surface that we put in. We were just fighting Mother Nature and headaches, at least for the high school and the community college. They were not able to play their games in March and April because of the rain that we get in this area and the fact that the field would not drain.

"We committed $300,000 to the school district to help pay for the turf and asked if we could sell naming rights to the field. We targeted several companies, but Funko was at the top of our list. Fortunately, we got a meeting with them and then everything just fell into place. They were looking to show their support of the community and came on board. It was a way for them to ... show that they're here for the long haul."

When the partnership was announced, Funko CEO Brian Mariotti said the company and team were striving to "create amazing moments at the stadium." Funko Fridays, featuring freebies exclusive to Everett, were born.

A mere 29 miles from the parent club Seattle Mariners' T-Mobile Park, the AquaSox's field of dreams became a hot spot for Funko fanatics last season. Among the exclusive collectibles were a Copa de la Diversión figurine of mascot Webbly in the team's alternate Conquistadores uniform and a sunglasses-adorned Jay Buhner Funko Pop! commemorating his 2001 three-game rehab stint with Everett. (He was 6-for-10 with two dingers, a double, three runs scored and three RBIs.)

"Normally, to get a Funko Pop! figure created, they're going to need to produce 30,000 as kind of their minimum," Tetzlaff said. "But for us, they made an exception and we're able to do giveaways that are AquaSox mascots and AquaSox players. They've made an exception to their normal number and created a Pop! for us that fit right up our alley for our fans and for our giveaways.

"We kind of brought two fan bases together -- the fan base of the AquaSox with the fans of Funko. People that collect Funko Pop! and love Funko items didn't always come out to the ballpark. Now, they do. And people who were baseball fans didn't know a whole lot about Funko. So it kind of was a perfect storm in perfect marriage."

Located north of Seattle along Interstate 5, Everett is a bustling town of 103,000 and the seventh-largest city in Washington. Alaska Airlines has passenger service from Paine Field with daily nonstop flights to Las Vegas, Los Angeles, Phoenix, Portland, San Diego and San Francisco, among other cities. The Imagine Children's Museum has three floors of interactive exhibits and received accreditation from the American Alliance of Museums.

The first Funko Friday, on June 21, was a success by any measure, especially attendance: a crowd of 4,395 turned out at a stadium that seats 3,682. The AquaSox were confident from the start that fans would embrace the team-centric Pop! figures, but Tetzlaff admitted the team was still surprised.

"Even my high expectations were not high enough," he said. "It far exceeded what I envisioned. Our first night of having a Funko Friday, we got a little overwhelmed. We made some changes for the next one and it went a lot smoother. It was quite a little over the top. It exceeded expectations -- and then some."

A reporter for the Everett Herald heard stories of enthusiasts showing up for early-season Funko Friday giveaways seven hours before game time.

"It's a great way for our fans to enjoy our local field," Funko retail manager Liz Lawson told the newspaper. "Funko has their own fans, and I noticed they're here, and I don't think they'd ever be here if we didn't do these Funko Fridays. It encourages people to get out of their natural bubble."

Funko's wide-eyed Pop! collectibles cover the pop-culture spectrum, from Batman to Harry Potter as well as iconic staples such as Bob's Big Boy, the Coca-Cola Polar Bear and Bazooka Joe. The company went public in 2017 and expected revenue near $850 million in 2019.

Mariotti has said publicly that Funko's success comes from being "the platform in which [people] engage with pop culture," and that the company is working to "connect people to their favorite entertainment through fan experiences as well as digital and physical goods."

It's a combination of fan experiences and physical goods that has made an impact with the AquaSox. Tetzlaff and his staff already are preparing for the upcoming Northwest League season, which opens for Everett on June 17 at Salem-Keizer. The AquaSox's home opener is June 22, with the first Funko Friday on June 26.

"We've got some plans in the works," he said. "We're hoping to do a Pop! that ties into one of our local charity nights. We might see Webbly on a specialty jersey that ties into a charitable night. We're finalizing which player we will recognize as we did with Buhner last year.

"Our online sales have gone up because people want to buy the Funko Pop! that we sell," Tetzlaff added. "Fans also want to buy the Funko Field T-shirts. When we put those on sale last spring, we had more online sales in one day than we'd had in three months combined. There have been some neat benefits and the popularity has been going strong, and we hope to keep that going with some fun and new ideas going forward."