Florial perfect 4-for-4 at plate for Tarpons 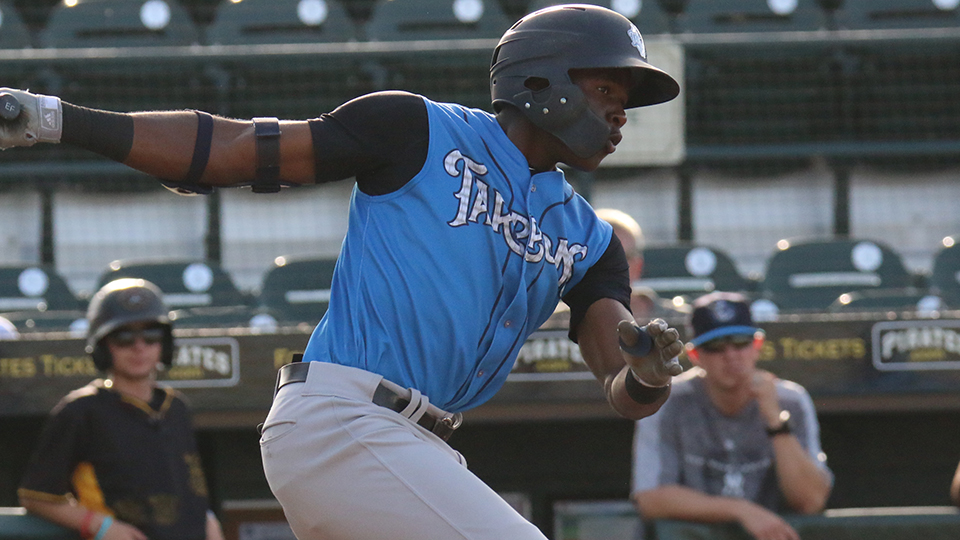 Estevan Florial built some momentum through his first two at-bats for the Class A Advanced Tarpons on Wednesday before the second game of a doubleheader was suspended. He rode it to a perfect performance at the plate when play resumed Thursday.

The top Yankees prospect recorded a knock in all four of his plate appearances, scoring twice and driving in a run, to help lift Tampa past Dunedin, 8-2, in Game 1 of the twinbill at George M. Steinbrenner Field. The victory snapped an 11-game winning streak by the Blue Jays.

"I think this was special for him," Tarpons skipper Aaron Holbert said. "He's had a few recent struggles -- been in kind of a swing-and-miss mode. [He was] not having the success he expects. But to go out there and start off hot yesterday and come right back today and get a couple of more hits, that's big for him."

Florial entered action with one hit over his last 12 at-bats spanning his previous three games. But the 21-year-old has shown the ability to turn things around quickly this season. Prior to his recent skid, Florial had a five-game hitting streak and has recorded nine multi-hit efforts through 30 games this year. Thursday marked his first four-hit game of the season, his first since last Aug. 12 at Bradenton.

"He's a big part of what we feel will be the future in New York," Holbert said. "It's just a matter of getting him locked in right now. The big thing for him is getting comfortable. He missed some time early with the injury, and then he got some at-bats in extended [spring training], but now he's been back with us for about 30 games. It's a matter of getting that timing back and getting used to the advanced pitching at this level.

"But the skill and the work ethic will turn this around, and at the end of the year, the numbers should be where they're supposed to be."

Florial was enjoying a breakout Spring Training before hurting his wrist in March when he crashed into the center-field fence. A stint on the injured list delayed the start of his season until June 3.

Against the Blue Jays, MLB.com's No. 47 overall prospect got his night started with a line drive into right field off right-hander Josh Winckowski (2-1) in the opening frame. He advanced to second on a single by Mickey Gasper, but was stranded in scoring position.

Florial faced Winckowski again the next frame with Pablo Olivares at second, and the native of the Dominican Republic turned around a first-pitch heater up the middle for an RBI knock that capped a three-run inning.

When play resumed Thursday, the 6-foot-1, 185-pound center fielder began a string of four straight hits off righty Mike Ellenbest by legging out a squibber to third base in the fourth. Donny Sands plated Florial on a two-RBI single to left three batters later.

Facing his third pitcher of the game, Florial ripped a 2-1 offering from righty Kyle Weatherly into center to lead off the sixth and then came around to score when Diego Castillo slapped a single to left with the bases loaded.

"[Florial] was swinging at strikes and staying through the baseball, that's huge for him," Holbert said. "Hitting those balls to the middle of the field and then using his speed to get on with that swinging bunt to third. We really want him to utilize the big part of the ballpark and that's what he did today.

"We all feel the success will be there for him in the long run, and this was a huge confidence builder for him heading into the latter part of the season."

Toronto's 20th-ranked prospect Ryan Noda accounted for Dunedin's offense with a two-RBI double to right in the fourth. Cal Stevenson -- the club's No. 23 prospect -- extended his hitting streak to 22 games by beating out infield single to short in the seventh.

The Tarpons swept the doubleheader with a 2-1 victory in eight innings in the nightcap. Steven Sensley clubbed a game-tying solo shot to right-center in the fifth off right-hander Maximo Castillo, and Castillo drove in the winning run with a base hit into center.

"I think the biggest thing with him is that he's really exciting to be around because if he goes 4-for-4 or 0-for-4, he's the same guy in the cage the next day," Migliaccio told MiLB.com on July 2. "He knows exactly what he needs and what he needs to work on, he never takes a day off, never any kind of excuse from him. He's always one of the first guys in the cage, he works really hard and I think now you're seeing the results of that."

Stevenson drove in Dunedin's only run on an RBI groundout in the third, but his hitting streak was snapped with an 0-for-3 performance.