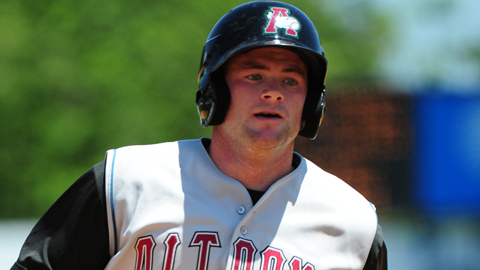 Matt Hague hit 15 homers while striking out only 62 times in 509 at-bats. (Kevin Pataky/MiLB.com)

This offseason, MiLB.com will be honoring the players -- regardless of age or prospect status -- who had the best seasons in their organization. We're taking a look at each team to determine the outstanding seasons in Minor League Baseball. Select a team from the dropdown below.

The Pittsburgh organization took home a championship at the Double-A level -- the Altoona Curve claimed their first Eastern League title -- and came close to another at the Class A Advanced level -- the Bradenton Marauders, in their first season as a Pirates affiliate, went 76-62 before losing in the opening round of the Florida State League playoffs.

The success at these two crucial stages of development speaks volumes about the system's strengths, as do the big league breakthroughs of Pedro Alvarez, Jose Tabata and Neil Walker.

The Curve had all the elements any championship squad needs and was especially flush with pitching. Forgetting for a moment the hurlers not named below, Altoona enjoyed spectacularly consistent and consistently spectacular outings from Jeff Locke, Justin Wilson and Daniel Moskos. The Curve staff finished second in the league in ERA (3.55) and fourth in strikeouts (1094) while issuing fewer walks (399) than any other team.

If the Pirates can keep the majority of that talent in the system, they may be on the way to making the playoffs for the first time since 1992.

Catcher -- Hector Gimenez, Altoona (94 games): Though 2009 first-round pick Tony Sanchez was dominant in his debut campaign at the full-season level until a July injury took him out of action, Hector Gimenez did a bang-up job at and behind the plate for the Eastern League champion Curve.

The 28-year-old tied for second in the circuit with a .305 batting average and belted a career-high 16 homers while knocking in 72 runs in 94 games.

Gimenez, who was signed by the Astros in 1999 and missed the 2007 campaign while recovering from rotator cuff surgery, signed with the Dodgers and was placed on their 40-man roster in November.

Altoona skipper Matt Walbeck, who was fired weeks after being named Eastern League Manager of the Year, indicated 2010 was a key year in Gimenez's reestablishing himself as a prospect.

He described the catcher's season as one of "big progress," emphasizing the mental toughness required to pull off such a rebound.

"To have to return and repeat at that level, with the experience he's accumulated in his career, shows a great deal about his makeup and general ability to do his best for his team," Walbeck said. "Both behind the plate and offensively, he was our leader."

First base -- Matt Hague, Altoona (135 games): Hague, a 2008 ninth-rounder, nearly doubled his home run total from the 2009 season at Class A while posting a .375 on-base percentage. He notched 61 walks compared to 62 strikeouts and had the fourth highest plate appearance-to-strikeout ratio (9.37) in the Eastern League.

"He's one of the guys who was the glue of our team," Walbeck said. "He came up with a lot of clutch hits and he got stronger and stronger on defense, especially digging balls out of the dirt. He was a great teammate. He has a great approach, mentally and physically. You knew what you you were getting every day with Matt Hague.

"His walks-to-strikeout ratio was above average -- he took what they'd give him, [but] he was a real run-producer, too. He hit to all fields and he knows how to drive the ball."

"He really put himself on the map this year," Walbeck said.

Second base -- Jim Negrych, Altoona (75 games), Indianapolis (48 games): Negrych combined to bat .283 with 26 extra-base hits over 123 games between Double-A and Triple-A, and he hit .406 in the final 10 games of the regular season before putting up a .348 average in the Eastern League playoffs.

While most of his games for Indianapolis were spent at second base, he saw time as Altoona's designated hitter, second baseman, third baseman and left fielder.

"Defensively, he got better as the season went," Walbeck said of the University of Pittsburgh product. "He was able to contribute in more ways than one. Offensively, he was always a threat in the league."

Negrych was the Pirates' sixth-round pick in 2006.

Third base -- Josh Harrison, Altoona (135 games): As Pedro Alvarez worked his way onto the big league scene, it was easy to miss the exceptional play of Josh Harrison.

Although he didn't put up the kind of power numbers one hopes to see from a corner infielder, Harrison was undeniably consistent and productive for the Curve.

"He's a proven .300 hitter. Everywhere he's gone, he's hit," Walbeck said, adding that he envisions Harrison getting more pop out of his swing as the 23-year-old's body matures. "The power will come for him. He hit three home runs for us in the playoffs. That doesn't show up on his baseball card, but that's [a show of power].

"Defensively, he's a gamer. He had no problem going from second to third. He's [former Major Leaguer] John Shelby's nephew, so he has some pedigree."

Harrison's .300 average was fourth-best among Pirates Minor Leaguers and Walbeck also speaks highly of his intangibles.

"We had so many great guys on this team and Josh is one of those guys who sort of said what we were all about on the field," he said. "He worked hard, he never complained, he knew how to put the ball in play. He's a character guy who knows how to play baseball."

Walbeck said the dip in average could be attributed to d'Arnaud's adjustment to Double-A pitching.

"At first, yeah, he got off to a slow start," the manager admitted. "He works a lot with [Curve hitting coach] Ryan Long and [then Minor League hitting coordinator] Gregg Ritchie, who was just named hitting coach of the Pirates, and Chase did make the adjustment.

"The thing about Chase is his tenacity, and his ability to not take any at-bats onto the field -- he doesn't let what he did yesterday affect his approach."

On Sept. 4, d'Arnaud went 4-for-5 with two triples while falling a home run shy of the cycle. He was caught stealing only three times in his final 18 attempts of the season.

"What most impressed me were his instincts on the bases," Walbeck added. "He steals, he goes first-to-third, he has great baserunning instincts."

In the playoffs, d'Arnaud ranked second with a .613 slugging percentage.

"He gives you a good effort all the time," Walbeck said, "and he showed gradual improvement."

Kelson Brown, a late-round pick in this year's Draft, merits honorable mention for his .293 batting average and 84 total bases in 62 games at State College.

Quincy Latimore, Bradenton (134 games): Latimore led all Pirates with 100 RBIs, and his 19 homers were second among Pittsburgh Minor Leaguers.

The 21-year-old was nabbed in the fourth round of the 2007 Draft, but 2010 marked his first full season. The extra playing time did him well. In the Florida State League, he posted a higher batting average than he compiled in the Rookie-level Gulf Coast League, the short-season New York-Penn League or the Class A South Atlantic League. He also was a major factor in Bradenton's run to a playoff spot. Latimore's homers were tied for second in the FSL and his RBIs and 230 total bases both easily led the loop.

"He's one of those rising stars that I don't think anybody took seriously until he put up gargantuan numbers," Walbeck said. "What a great story. He was not a high Draft pick, I don't think. That's the kind of guy that really can help out an organization."

"He's not a big guy, but he has a strong swing and he knows how to put backspin on the ball and drive it," said Walbeck. "He absolutely crushed. He hit well against [Stephen] Strasburg and the better pitchers in the league.

Brandon Moss, Indianapolis (136 games): No member of the Pittsburgh organization swatted more homers than Moss (22), whose 96 RBIs led the International League and ranked second in the system.

Moss also finished near the top of the IL in total bases (tied for third, 235) and extra-base hits (fourth, 56).

A Minor League veteran, he was taken by the Red sox in the eighth round of the 2002 Draft and wound up with the Bucs as part of the three-way deal that sent Manny Ramirez to the Dodgers in 2008. The 2010 season was his first with more than 20 homers.

Moss batted just .154 during a 17-game cup of coffee with Pittsburgh, but his efforts at the Triple-A level can't be ignored.

A 16th-round pick in this year's Draft, he was selected to the New York-Penn League All-Star Game and took home a Player of the Week award after notching multiple hits in four of seven games from July 12-18. A season-opening 12-game hitting streak staked him to a .404 average.

Curry, who spent most of the season at first base, wrapped up the campaign with 14 doubles and seven homers in 58 games, good for a .477 slugging percentage.

Right-handed starting pitcher -- Bryan Morris, Bradenton (eight games), Altoona (19 games): Morris' 2010 effort put the right-hander back on track. The 23-year-old was taken by the Dodgers in the first round of the 2006 Draft, missed 2007 following Tommy John surgery and was dealt to the Pirates in the 2008 Ramirez trade. His 2009 season was marred by offseason toe surgery and tendinitis in his shoulder.

"Coming off the surgery, he really had some good starts," Walbeck said. "He can be tough, with that power curve he has."

Left-handed starting pitcher -- Rudy Owens, Altoona (26 games): Clearly a factor in the Curve's championship campaign, Owens led the Eastern League and the Pirates organization with a 2.46 ERA, holding Double-A foes to a .226 batting average while allowing the fewest baserunners per nine innings (9.12) in the EL.

"He just dominated again. He repeats his delivery, he's so consistent," Walbeck said. "He has good work habits, he's left-handed, he has everything you could want in a young pitcher."

Owens' 12 wins put him in a three-way tie for tops among Bucs farmhands and his 132 strikeouts ranked third in the system.

Relief pitcher -- Noah Krol, Bradenton (63 games): Krol led both the Pirates system and the FSL with 34 saves, which he recorded in 40 opportunities, and he held opponents to a .212 batting average.