Will attempt to set world record with 1,000-ft catch! 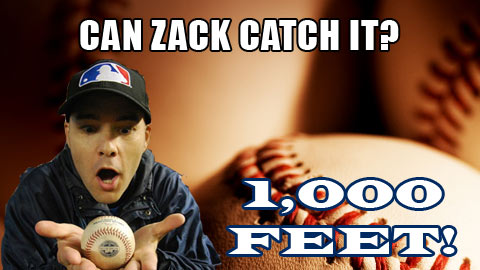 LOWELL, MASS. - The Lowell Spinners, Class-A Affiliate of the Boston Red Sox, are pleased to host yet another world record attempt when author and baseball fanatic Zack Hample will attempt to set a pair of records related to the greatest height at which a baseball can be caught on the morning of Monday, July 2 at LeLacheur Park.

Hample will attempt to break the current record, set by Hall of Fame catcher Gabby Hartnett, who caught a ball from a blimp at 800 feet in 1930.

"When Zack first approached us about the idea, our initial reaction was 'absolutely yes'," said Spinners Director of Media Relations Jon Boswell. "When you shoot someone out of a cannon over the outfield wall, there's not much that falls into the 'no' category."

The record breaking attempt is set to occur Monday, July 2 at 7:30 a.m. when the wind and sky conditions are optimal. Hample, decked out in catcher's gear provided by Rawlings, will first attempt to catch a softball from a height of 300 feet, breaking that Guinness World Record, before moving on to a baseball from intermediate heights building up to 1,000 feet.

"There are only so many times you can be a part history," said Boswell. "Zack has done the research and is putting himself on the line. We're just thrilled to be a part of it."

Hample has snagged more than 6,000 baseballs at 50 different Major League venues since 1990, earning visits to The Tonight Show with Jay Leno, CBS Evening News, ESPN and more. Hample has notably caught the last Mets home run ever hit at Shea Stadium, but never a ball quite like this.