Breakout 2015 could be just the beginning; Clevinger also on way 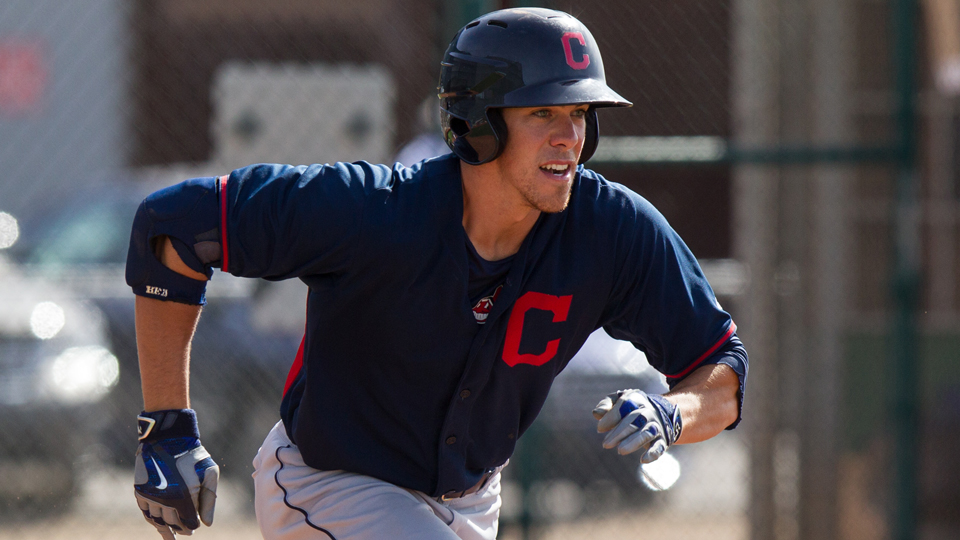 Jumping up to Double-A in July demands a lot of a player, especially if it's during that player's first full professional season. In that context, Zimmer's numbers over 49 games in the Eastern League last year (.219/.313/.374, six homers, 12 steals in 14 attempts) don't look half bad. Consider that those numbers are deflated by a 1-for-21 September -- the grind of a season is no joke -- and they look decent. Factor in that later in the month, the Indians learned Zimmer had been playing with a hairline fracture in his foot for the bulk of his time in the EL, and they look downright astounding.

"I'm just getting started here," Zimmer said in early March at the Indians Player Development Complex in Goodyear, Arizona. He had reported to the facility in January for a rehab program and was happy to ramp up his baseball workouts. "I've got my foot all healed up, getting going with the guys. It feels good to be back."

Despite how his 2015 season ended, Zimmer established himself as Cleveland's top prospect and the No. 26 prospect overall. Starting the campaign in the Class A Advanced Carolina League, he hit .308/.403/.493 and still finished third in the circuit with 32 stolen bases despite his July 10 promotion to Double-A Akron. He also totaled 16 homers last year -- two more than he hit during three years at the University of San Francisco -- and 26 doubles. Those numbers are only going to climb.

"Once you establish a solid approach and grow into your body, I think it all kind of comes together," the 23-year-old center fielder said. "Everyone wants to put up power numbers and hit homers. That's a lot of fun, and it makes playing a lot more fun, hitting the ball hard. It's something that I've been working on. I've gotten bigger as time's gone on, and I think there's more to come in the future."

With one April-September haul under his belt, Zimmer is also more prepared for the demands of the next one.

"The body takes a beating. I was definitely feeling that toward the end of the year, the hundred-and-something games we play," he said. "The last 15-20, your body's kind of hurting, so I think I got a lot of knowledge off that, and by that time [this] year, my body will be seasoned for it and I'll be good to go."

Just 20 years old, Mejia could repeat the Midwest League for the whole season without taking a step back. In 2015, the backstop made strides on defense but still had 16 passed balls and 14 errors over 827 2/3 innings catching for Lake County. The better his blocking and receiving skills become, the more they'll complement his laser arm -- he threw out 32 of 93 would-be thieves (34 percent) last year.

The native of the Dominican Republic has the chance to really turn heads this year, though, by delivering numbers that showcase his potential at the plate while he continues to grow behind it. In three pro seasons -- when he was a teenager facing more advanced pitching each year -- Mejia has put together a .333 career on-base percentage. A switch-hitter with decent raw power, he slugged nine homers and doubled 13 times in 2015 but went through prolonged slumps (for example: 2-for-21 to start the campaign, 0-for-16 from June 6-10, 2-for-28 from July 1-15, with 17 of his 78 total strikeouts and just three of his 38 walks coming during those 19 games) that lowered his season average to .243.

Mejia has the physical tools to match the .282 average (and, at least, the .339 on-base percentage) he posted in the Class A Short Season New York-Penn League in 2014 in higher levels, and his power numbers will only increase as he makes more consistent contact.

Clevinger was drafted by the Angels in the fourth round in 2011, but his career really got going when, in the midst of his first full season after having Tommy John surgery, he was traded to the Indians in a one-for-one deal for Vinnie Pestano on Aug. 7 2014. Working in a new system, he reestablished himself.

"We've revamped my mechanics from top to bottom since I came over in '14. It's been a whole year of building," he said. "It felt like I was a whole new guy out there."

In 2015, his first season at the Double-A level, Clevinger went 9-8 with a 2.73 ERA over 27 games, 26 starts. The performance earned him the organization's Bob Feller Award as Minor League pitcher of the year and prompted Indians president of baseball operations Chris Antonetti to call the 25-year-old righty's progress "one of the highlights of our development system last year."

Clevinger was optioned to Triple-A Columbus for the start of the year, but his experience in big league camp during Spring Training has him focused on managing his energy level more carefully at the beginning of games in hopes of stretching out his starts.

"The whole thing here is working on my intensity," he said. "That's what Tito [manager Terry Francona] and [pitching coach] Mickey [Callaway] talk to me about, making sure I'm not getting too over the edge.

"I want to go deeper into games sooner [than last year]. It took probably until past the All-Star break to really go consistently deep sixth, seventh, eighth inning in games. I want to start that off the bat, and go deep as long as I can, be as efficient as I can."

Should spots open up in the Cleveland rotation, there's no reason Clevinger wouldn't be able to help out. In the meantime, he'll gain experience in the International League.

Drafted out of a Florida high school as a sandwich pick (No. 42 overall) last year, McKenzie cruised through the 12 innings he pitched in the Rookie-level Arizona League, whiffing 17 and posting a 0.75 ERA over four games, three starts. The Indians may start the youngster in extended spring camp -- he doesn't turn 19 until Aug. 2 -- but the organization challenged 2014 first-rounder Justus Sheffield with a Lake County assignment last year, and that paid off. Even if he doesn't get there out of the gate, McKenzie has the tools and the mentality to compete in the Midwest League.

"I think it all comes down to, you come out [to Spring Training] and you work as hard as you can," he said. "It doesn't matter what situation you're in, how much workload you have to do. As long as you're giving 100 percent effort, you know you're going to get the best out of yourself and the best out of your teammates."

At the lowest rungs of the Minors, the 6-foot-5 righty can get a lot of mileage out of a high-80s/low-90s fastball that he controls well. His curveball already has great movement, and his changeup is advanced for his age and experience level. As McKenzie increasingly throws those off-speed pitches for strikes and gains confidence in them, he will have an increasingly easy time in A ball.

"I feel like my fastball command is a little bit ahead of my other two pitches," he said. "But I think that's natural. That's usually every kid's best pitch."

Bradley won the Triple Crown (.361, eight homers, 50 RBIs over 39 games) in the Arizona League in 2014, his first taste of the pros, but not even that performance foreshadowed the power he would demonstrate in 2015. Limited by an oblique injury that cost him the end of April and beginning of May, he still led the Midwest League with a .529 slugging percentage and 27 homers, one short of a Lake County franchise record.

Bradley turns 20 on May 29, and although his approach is a bit all-or-nothing (he was also second in the Midwest League with 148 strikeouts last year), the left-handed hitter does drive the ball to all fields.

More to keep an eye on: Outfielder Clint Frazier had a remarkable season at the Class A Advanced level last year (.285/.377/.465 with 16 homers and 15 stolen bases) and then tore up the Arizona Fall League (.281/.347/.438, three homers, four stolen bases over 22 games). Although he wasn't officially invited to big league camp, he got to play in four Cactus League games this spring, going 0-for-5 with a walk. He and Zimmer should bring some excitement to Akron. ... On the blog, MiLB.com caught up with Tyler Naquin before he made the Tribe's Opening Day roster. ... It will be worth watching what 21-year-old lefty Rob Kaminsky does this year, his first full season in the Cleveland system. He came aboard from the Cardinals in exchange for Brandon Moss at the trade deadline last year, but made only two starts before being sidelined with a sore back. Even still, he aced the Class A Advanced Florida State League with St. Louis' affiliate and figures to spend the bulk of this season in the Eastern League.