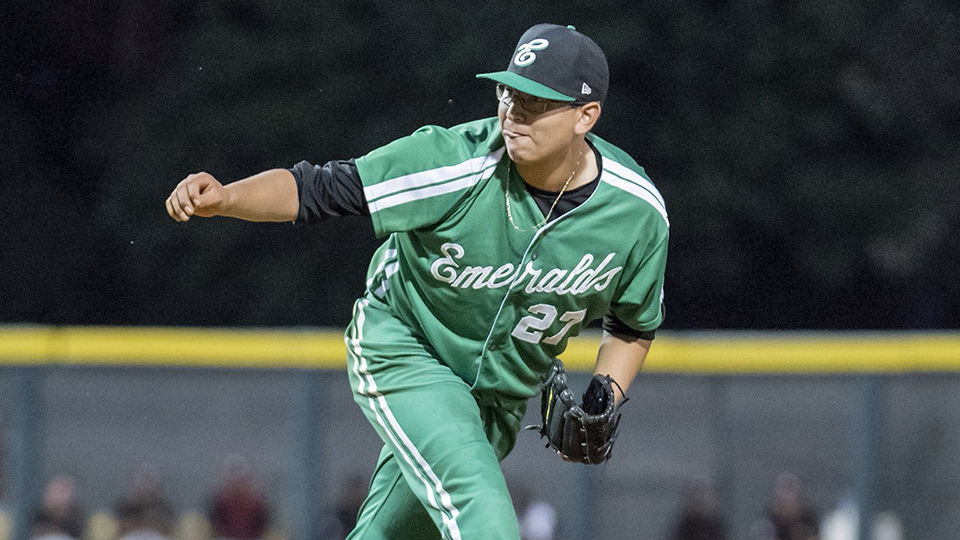 With 2017 first-round Draft pick Brendon Little getting the start in Game 2 of the Northwest League Championship Series on Sunday night, the odds of Javier Assad getting his share of attention figured to be slim.

Instead, the 20-year-old had the spotlight all to himself.

Assad allowed one hit and two walks while striking out nine in six scoreless innings of relief as Class A Short Season Eugene defeated Vancouver, 4-2, to even the best-of-5 Finals at a game apiece at PK Park.

It marked the third time this year that the Tijuana, Mexico native allowed one hit over six innings, including his penultimate start in the regular season on Aug. 25. All 13 of his appearances in 2017 came as a starter and he went 5-6 with a 4.23 ERA. The nine strikeouts matched a career high totaled three times during the regular season. Overall, his 72 punchouts were tied for the fourth-most in the league.

"I felt really good out there," Assad said through teammate and translator Michael Cruz. "I wasn't worried about my role [as a reliever]. I just went in there, worked aggressively and went after it.

"I didn't even have it in my mind that we were down a game. I just didn't think about it. I wanted to be aggressive and go with my best stuff. I have total trust in myself to get the job done and that made me feel comfortable on the mound."

The Cubs right-hander entered the game with a 3-2 lead and retired the Canadians quickly in the top of the third inning. Assad (1-0) found trouble in the fourth when Vancouver loaded the bases with one out. Brock Lundquist singled and took second on a throwing error by third baseman Austin Filiere. Chavez Young walked, but Assad escaped unscathed by getting Reggie Pruitt to bounce into an inning-ending double play.

The 6-foot-1, 200-pound hurler walked Norberto Obeso to begin the fifth, but ended his outing by retiring 12 straight. He struck out the side in the eighth and Jake Steffens worked around a leadoff double in the ninth to record his first postseason save.

"I felt great tonight with my fastball, my two-seamer," Assad said. "I attacked the hitters with that and then went to my slider as my out pitch, which was also working well. I went after the hitters right away and it worked out for me. I feel great right now.

"It's nice to see progress from the work I've put in. I struggled earlier in the year a little with my mechanics, but I worked hard with pitching coach David Rosario and now I feel great."

Filiere opened the scoring with a two-run homer to left field in the first and Gustavo Polanco added an RBI single to center later in the frame.

Little -- the Cubs No. 5 prospect -- surrendered two runs on one hit and four walks with four strikeouts in two innings for Eugene.

Pruitt knocked in both Vancouver runs with a two-out triple in the second.

Game 3 of the series shifts to Vancouver on Monday night.