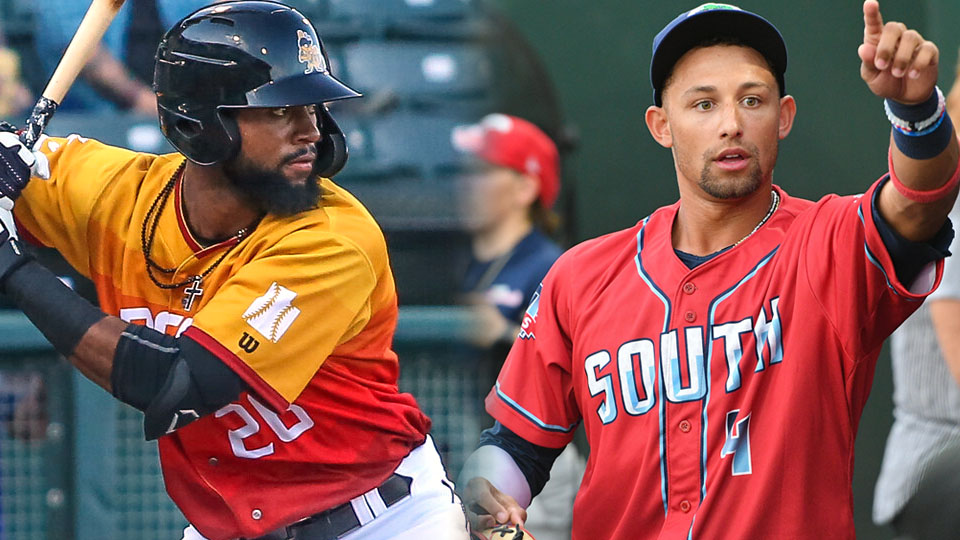 Jo Adell and Royce Lewis are headed to the AFL two years after being taken in the 2017 Draft. (Paul Asay, Tom Hagerty/MiLB.com)

The Arizona Fall League is going to be a little different in 2019, but the talent level will be as high as ever.

Angels outfielder Jo Adell (No. 4) and Twins shortstop Royce Lewis (No. 7) headline the list of 20 Top-100 prospects named to the Arizona Fall League rosters released by the circuit Wednesday. Mesa, Peoria, Salt River and Scottsdale each claim four of those Top-100 prospects while Glendale and Surprise each boast a pair.

Adell is the headliner on the Mesa squad in his first trip to the AFL. The 20-year-old outfielder's season began late due to hamstring and ankle injuries but has been on a tear since debuting in May. He has hit .289 with 10 homers, seven steals and an .842 OPS over 71 games across three levels and is finishing the regular season with Triple-A Salt Lake. He'll be joined on the Solar Sox roster by Indians third baseman Nolan Jones, (No. 38), Cubs infielder Nico Hoerner (No. 48) and Cubs catcher Miguel Amaya (No. 88). Hoerner returns to Arizona after hitting .337/.362/.506 in the Fall League last year.

Lewis -- the top overall pick in the 2017 Draft -- will play for Salt River this autumn. The 20-year-old shortstop has struggled at times this year with Class A Advanced Fort Myers and Double-A Pensacola, hitting just .239 with a .665 OPS in 122 games, but he possesses plus-plus speed (21 steals) and still has a plus overall hit tool for his age. He will have a familiar face beside him in the Rafters dugout in No. 16 overall prospect and fellow Twins farmhand Alex Kirilloff. Rays right-hander Shane Baz (No. 93) and D-backs outfielder/first baseman Seth Beer (No. 97) round out the group's Top-100 contingent.

Peoria boasts the top pitching prospect headed to the Fall League in No. 17 Forrest Whitley. The Astros right-hander was expected to play a role for the big club in 2019 but has suffered through shoulder soreness and general ineffectiveness that has limited him to only 52 1/3 innings across four affiliates. He'll get a chance to make up for those lost innings in the AFL, where he made six starts a season ago. Mariners outfielders Jarred Kelenic (No. 23) and Julio Rodriguez (No. 52) and Pirates shortstop Oneil Cruz (No. 59) give the Javelinas their four Top-100 prospects.

The Scottsdale lineup will be heavy on San Francisco talent with Giants prospects Joey Bart (No. 20) and Heliot Ramos (No. 53) joining the Scorpions side. Phillies third baseman Alec Bohm (No. 35) and Mets shortstop Andres Gimenez (No. 91) give Scottsdale plenty of talent on the infield.

In a change from previous seasons, the Arizona Fall League is scheduled to begin on Sept. 18 -- weeks earlier than previously and just one day after the Triple-A National Championship Game. The AFL season will end with its own championship on Oct. 26.

The full 2019 Arizona Fall League rosters can be found at the links below.