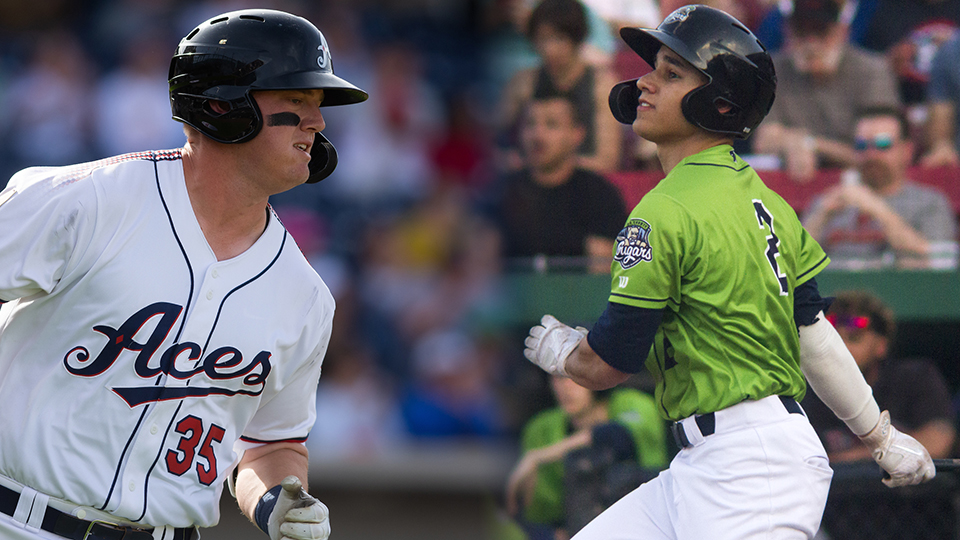 Kevin Cron and Alek Thomas stood out at the plate for Arizona this season. (Reno Aces/Justin Thomas)

One year after finishing with an impressive .541 organizational winning percentage, the D-backs topped it in 2019 with a .551 mark. It was a top-to-bottom effort that saw the club take home championships in the Southern, California and Northwest leagues.

Successful seasons throughout the system came with plenty of individual honors and awards. Along with Kevin Cron's Minor League-leading 39 long balls, the D-backs boast five Top-100 prospects, two of whom -- Alek Thomas and Daulton Varsho -- played in the All-Star Futures Game.

The big league team finished with 85 wins and, with plenty of talent throughout the Minors, sustained success over the next few seasons should not be hard to imagine.

Catcher -- Daulton Varsho, Jackson (108 games): Taking more than a few steps forward, Varsho in on this list for the third season in a row. MLB.com's No. 9 catching prospect made the jump to Double-A and thrived against stiffer competition with a .301/.378/.520 slash line and a career-high 18 homers among 47 extra-base hits. A broken hamate bone slowed things down a bit in 2018, but Varsho returned this year to earn midseason and end-of-season All-Star plaudits in the Southern League while garnering a nod to the Futures Game in July. He did it all while handling the rigors of 76 games behind the plate and also played four games in center field for the first time as a pro.

"I thought he caught well and continued to improve throughout the year," D-backs vice president of player development Mike Bell said. "He controlled his at-bats well, got on base, hit for power. It seemed to improve as the year went on, and to do that as a catcher in [the Southern League] says a lot. Obviously, we had him playing some center field and he played it well. So you're talking about an offensive catcher and a center fielder that has defensive skills at two premium positions on the field."

First baseman -- Kevin Cron, Reno (82 games), Arizona (39 games), AZL D-backs (two games): The 6-foot-5, 250-pound slugger has 60-grade power and showed just what he's capable of by snagging the Joe Bauman Award with 39 dingers in only 84 Minor League games. In a year that saw offensive numbers jump just about everywhere at the Triple-A level, Cron stood alone at the top with a .777 slugging percentage. The 2014 14th-round pick added to his milestone ledger by going deep three times in a game twice (April 26, Aug. 13). It was a career year at the dish for the Triple-A All-Star, who also made his first trip to the Majors and blasted six homers with a .521 slugging percentage in 39 games.

"That will probably go down as one of the best offensive years ever -- at any level -- when you look at it with the amount of at-bats that he had," Bell said. "He did a great job there, he played first, a little bit of third and did a good job. In a small sample size in the big leagues, he showed the power there, too. We're really happy for Kevin. It wasn't easy, it's never easy to go back and forth and trying to get consistent at-bats."

Second baseman -- Andy Young, Reno (68 games), Jackson (65 games): One of the pieces acquired in the Paul Goldschmidt trade with the Cardinals, Young impressed across two levels in his first year in the system. After posting an .816 OPS in the first half of the season with Jackson, he made the jump to Reno on June 16 and saw his numbers rise with the promotion. Young blasted 21 roundtrippers with a .611 slugging percentage in 68 games with the Aces down the stretch. At second base, his primary position, Young held down the fort with a .984 fielding percentage and helped turn 28 double plays.

"I think we all know how important offense is in this game and it's hard to find. So when we were able to acquire a player like Andy, it's a big plus for us," Bell said. "He did perform well at two different levels and at various positions. ... He had a solid year and another guy who seemed to get better as the year went on."

Third baseman -- Wyatt Mathisen, Reno (87 games), AZL D-backs (eight games): Another player who was new to the organization this year, Mathisen signed as a free agent last November and blossomed at the hot corner and at the plate. Only once did he crack double digits in homers when he set a career best with 10 in 2018. This season, the 25-year-old more than doubled that total with 23 dingers while driving in 64 runs. At third base, he committed only two errors and boasted a .984 fielding percentage.

Shortstop -- Domingo Leyba, Reno (112 games), Arizona (21 games): A big reason why Reno's infield was so impressive, Leyba produced from the beginning of the season. Always a player who could hit for average, the 24-year-old established career bests with 19 homers and 77 RBIs. Strong numbers all year led to a chance in the Majors, and Leyba performed well with a .280 average and .807 OPS in 21 games.

"He was healthy and had a great year," Bell said. "Played a good shortstop, second base. He just has a knack to hit and he can find the barrel. He can get on base and can drive the ball occasionally, too. When he went up to the big leagues, he got some big hits up there and played well."

Alek Thomas, Kane County (91 games), Visalia (23 games): A 2018 second-round pick, Thomas made impressive leaps in his first full season to become the club's top prospect. All he did as a 19-year-old in the Midwest League was hit .312/.393/.479 to earn spots at the All-Star Game and the Futures Game. During a 24-hour stretch in July, Thomas followed his first career five-hit game by hitting for the cycle. His all-around standout play got him a month in the California League at the end of the season.

"He went to a pretty advanced league for a high school kid and dominated the league in every facet," Bell said. "And then he went to Visalia and played good there, too, and helped that team win a championship. It was a great year for Alek. He's a good baseball player, he's been around the game for a long time and he has an advanced outlook on the game. He knows everything it takes to be a good big leaguer. ... I expect him to take a big jump forward again next year."

Kristian Robinson, Hillsboro (44 games), Kane County (25 games): The second-ranked D-backs prospect got things started in the Northwest League and never looked back. Robinson would have finished second on the circuit in batting (.319) had he garnered enough plate appearances. After ranking second with nine homers and putting up a .966 OPS through the summer, Robinson was elevated to the Midwest League when Thomas climbed to Visalia. Although he got off to a bumpy start with Kane County, the 18-year-old totaled nine extra-base hits, including five homers, in 25 contests. He also saw time at all three outfield positions and picked up six assists.

"We asked him to do things that we haven't asked anybody in the system as long as I've been here," Bell said. "Especially going to the Midwest League after he dominated in the Northwest League -- it was really impressive. He got off to a little slow start in the Midwest League and I think we expected it, but then at the end of the year he got hot and seemed to settle into the league and started driving the ball and having good at-bats."

Dominic Fletcher, Kane County (55 games): A second-round pick this year out of the University of Arkansas, Fletcher went right to full-season ball and did not miss a step. He batted .318 with an .852 OPS, thanks to 20 extra-base hits in 55 contests. His first full month as a professional stood out to be his best as he blasted three long balls and posted a .914 OPS.

"I think the last person we sent directly to the Midwest League might have been A.J. Pollock. He's turned out to be a pretty good player, so to have Fletch go there and have him perform the way he did and become a leader of that team was great," Bell said. "That's a good sign for us going forward. He's a good bat, he's a good outfielder and we're excited to see what he can do at more advanced levels."

Utility -- Yasmany Tomas, Reno (102 games), Arizona (four games): A veteran bat on a team that already had a loaded offense, Tomas was a productive presence in the middle of the Aces lineup. The Cuba native mashed 29 homers and set a career high with a .590 slugging percentage. On May 20, he became the second player since 2014 to mash four homers in a game and went on to win Home Run Derby at the Triple-A All-Star Game. Tomas split his time at first base and left field to give Reno some flexibility.

Honorable mention -- Pavin Smith, Jackson (123 games): His first full season in the California League was a bumpy one, but Smith rebounded nicely in 2019 with the Generals as he put up a .291/.370/.466 slash line in his first crack at Double-A.

Right-handed starting pitcher -- Levi Kelly, Kane County (22 starts): He didn't start the season until May, but the 20-year-old wasted no time getting things going and set the tone on the mound for the Cougars. With a 60-grade fastball and slider, Kelly boasts two plus pitches that helped him compile a 2.15 ERA and 1.11 WHIP while ranking fifth in the Midwest League with 126 strikeouts. He fanned at least eight five times reached double digits in a June 30 outing at Cedar Rapids. Not bad for someone who wasn't expected to begin the year in a full-season league.

"The plan initially was to send him to the Northwest League, and he's definitely a mature kid for his age," Bell said. "We took a chance and challenged him and we saw a good fastball, we saw a great slider and a developing changeup. And for him to do it at a full season says a lot about him and what his potential can be."

Left-handed starting pitcher -- Michel Gelabert, Kane County (10 starts), Hillsboro (nine games, four starts): The 22-year-old had an up-and-down stint with Hillsboro but improved as he was promoted to Kane County in August and got a chance to start full-time. With the Cougars, Gelabert turned things up and posted a 2.96 ERA, 1.12 WHIP and 47 punchouts over 45 2/3 innings.

Relief pitcher -- Kevin Ginkel, Reno (15 games), Jackson (14 games), Arizona (25 games), AZL D-backs (two games): Another dominant year in the bullpen put Ginkel back in this spot for the second straight season. A 1.78 ERA across three Minor League levels was good enough, but the way he did it -- averaging 16 strikeouts per nine innings -- was downright filthy. Over 35 1/3 innings, he yielded four homers and whiffed 63. He was called up to the D-backs in August and struck out 28 in 24 1/3 frames in the Majors.