Kiel returns, but from a new angle 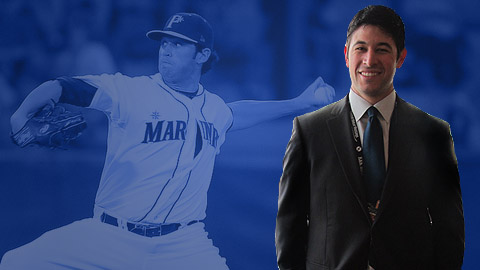 Lefty Ryan Kiel said he enjoys the business side of the Minors, too. (Ben Hill/MiLB.com)

Ryan Kiel was one of many job seekers in attendance at last week's Baseball Winter Meetings in Nashville, and at first glance his was a résumé that stood out. After all, the 25-year-old already found employment with a quartet of Minor League teams.

But Kiel's baseball experience differed greatly from his fellow PBEO Job Fair registrants -- in fact, he'd never worked for a Minor League front office in his life. Rather, Kiel's experience had come on the diamond itself: a left-handed pitcher, he was drafted by Seattle in the 37th round of the 2010 Draft and made his professional debut with the Pulaski Mariners that season.

His 2011 season was spent with the Class A Clinton LumberKings, and after getting released by the Mariners organization prior to the 2012 campaign, he quickly signed on with the Reds and went on to log time with the Class A Dayton Dragons and Class A Advanced Bakersfield Blaze.

But Bakersfield marked the end of the line for Kiel's Major League dreams, as he blew out his elbow after just two appearances there and was summarily released. Hence, he became that rarest of creatures -- a retired 25-year-old. Kiel is quick to acknowledge the innate absurdity of such a situation.

"When I talk to my friends about it, it's tough to tell them that I'm 25 and retired. I always put 'retirement' in air quotes," he said. "It was weird that first day, that feeling of, 'Wow, this is done. I'm never going to be on that side of the lines again.' But there isn't any more definite sign a pitcher can get than blowing out his elbow. So, for me, I'm good with it. I'm at peace. I appreciate both organizations I played for, for giving me a chance when I didn't expect to get one."

All of this explains Kiel's presence in Nashville last week. He spoke to me on Wednesday morning, amidst a hectic three days of nonstop networking within the gargantuan confines of the Gaylord Opryland Hotel.

"I always said that after my [playing] career I'd try to get in on the front office side," elaborated Kiel, a product of Marshall University who has gone on to pursue a sports management masters degree. "I'd always loved Minor League Baseball and loved it mostly because of the environment. It's not necessarily about the game, but about the experience it brings. I know that baseball did a lot for me growing up, and a lot of that was the relationships I made and just the experiences of going to a game and watching the game. That's why I wanted to get in on the business side of baseball."

Ryan Kiel will return to Pulaski in 2013, but not on the mound. (Tom Priddy/MiLB.com)

While most players merely tolerate the goofy between-inning antics taking place around them during ballgames, Kiel actively enjoyed them. He was particularly enamored with touring acts such as the ZOOperstars! and Myron Noodleman, due in large part to the anarchic spirit they bring to the ballpark.

"You can't operate that way at the big league level, because it's more structured and everything has to be politically correct," he said. "But in Minor League Baseball you're free to try more ideas, and to be more creative in finding ways to get people in the stands. That, to me, is very exciting."

An exciting enough prospect that Kiel was willing to travel to Nashville, mingling with hordes of other job seekers as they all searched for that oft-elusive first front office opportunity. While he acknowledged that his résumé may be lacking (at least in the traditional sense), the opportunity to network with those he'd met during his playing days while making new connections was, quite simply, invaluable.

"[The Job Fair] is tough. There are close to 500 people here, and everyone is trying to get their foot in the door," he said. "It's just a matter of finding a way to stick out."

Update: Kiel, in fact, did find a way to stick out -- earlier this week he decided to accept an offer to become the general manager of the Pulaski Mariners (yes, the same club for whom he made his professional debut in 2010). "I will begin my professional career where I began my playing career," he wrote in an email. "Funny how things work out."