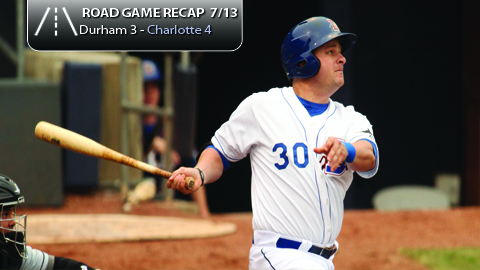 Battling for extra innings with the game tied 3-3 with two outs in the last of the ninth, Bulls reliever Bryan Augenstein was seen as missing first base after taking a flip from first baseman Henry Wrigley. Instead of heading to the 10th, manager Charlie Montoyo came out to argue with umpire Seth Buckminster. Two pitches later, Drew Garcia softly lined off the foot of Augenstein, and as the ball ricocheted through the third base line, Jim Gallagher scored from third to give the Knights (52-42) the victory.

The Bulls (43-51) fell nine games off the South Division pace with the defeat, their sixth against no wins at Knights Stadium.

Durham took a 2-0 lead in the fourth on a two-run homer by Stephen Vogt, then after the Knights tied the game in the bottom half, a sac fly by Cole Figueroa handed the Bulls a 3-2 lead.

Charlotte evened things up on a homer to right by ex-Bull Dan Johnson, his 22nd of the season.

Durham's best chance to win the game occurred in the seventh, with the Bulls filling the bases with one out and Rich Thompson at the plate. However, on a 1-2 pitch Thompson hopped a grounder next to second base with former Bull Ray Olmedo initiating a 6-3 double play to end the threat and keep the game tied.