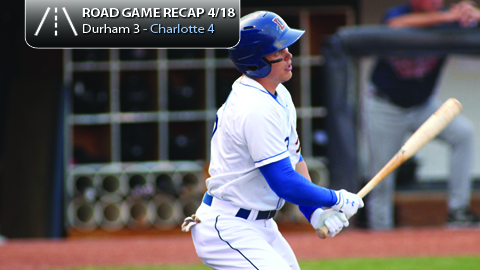 Fort Mill, SC --- A four-run second inning was just enough for the Charlotte Knights to defeat the Durham Bulls on Wednesday afternoon 4-3 at Knights Stadium.

Amid intermittent light and steady rainfall throughout the afternoon, the Knights (7-7) batted around against Bulls starter Chris Archer (L, 1-2) to seize command of the game. Five of the first six hitters reached, with Greg Golson doubling home a pair of runs to highlight the inning. A wild pitch and single by Jose Castro capped the scoring.

The Bulls (6-8) chipped away at Charlie Leesman (W, 1-1), but could not deliver the tying blow. In the third, Tim Beckham drew a two-out walk, and then advanced to second on a single to left by Brandon Guyer. Golson bobbled the pickup of Guyer's hit, allowing Beckham to take third, then as Golson threw back to the infield, he overshot Castro at second base and Beckham scored on the double-error.

In the fifth, the Bulls strung three two-out singles together, with Leslie Anderson grounding a base hit to left to score Guyer to make it 4-2.

In the seventh, Guyer singled home Kyle Hudson with two outs to trim the score to 4-3. However, the Bulls could not square up the game.

Back in the second inning, the Bulls failed with a first-and-third, one-out chance as Jesus Feliciano fanned and Nevin Ashley hit into a forceplay. In the eighth, trailing 4-3, Anderson reached third with one out, but Feliciano grounded to a pulled-in shortstop, then Ashley struck out.