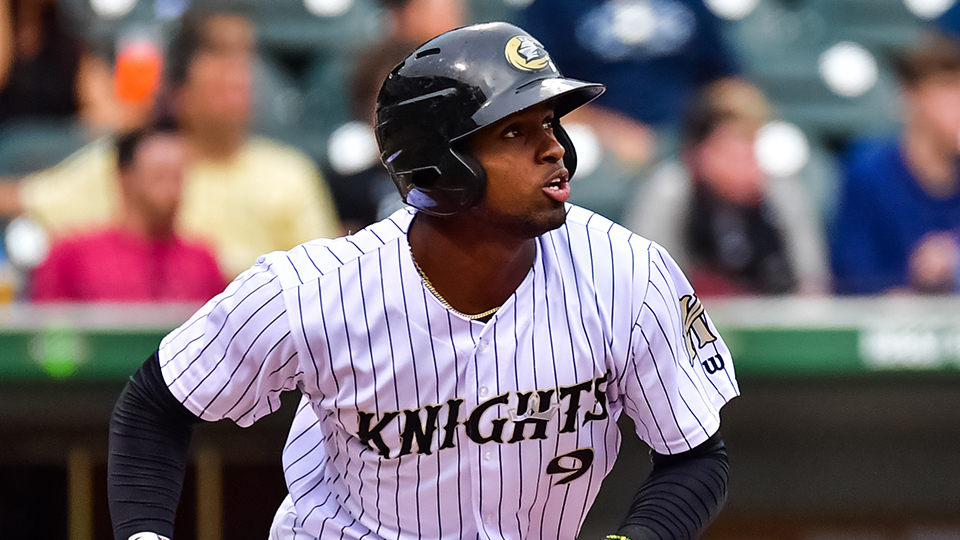 If Luis Robert has a weakness, three levels' worth of pitching has yet to find it. The only thing holding him back from reaching his potential was injury. Add that to the list of things he's conquered.

One week after homering twice and driving in seven runs in his Triple-A debut, the top White Sox prospect popped two more long balls to help power Charlotte past Buffalo, 6-0, on Thursday night at Sahlen Field.

Robert has hit safely in all seven games he's played in with the Knights to bring his International League slash line to .433/.486/1.067 with eight extra-base hits -- including five roundtrippers -- and 11 RBIs in seven games.

"I'm really glad that I've been having a good year so far and all the credit goes to mainly being healthy," Robert told MLB.com through an interpreter. "With the exception of five games this year, where I had a little pain, but besides that, I've had the results because I've been healthy."

Robert played in 50 games last season with the Rookie-level Arizona League White Sox, Class A Kannapolis and Class A Advanced Winston-Salem due to a pair of left thumb injuries. This year has been a different story.

The 21-year-old's third multi-homer game of his career -- all in 2019 -- continued what might be the best overall season by a Minor Leaguer this year. With two more hits, Robert has 38 multi-hit performances through 82 games, including three straight and five times in his first seven contests with Charlotte. Overall, MLB.com's No. 5 overall prospect is batting .356/.409/.659 with 23 doubles, seven triples, 21 homers and 64 RBIs across three levels. The 6-foot-3, 185-pound outfielder also has swiped 32 bases in 40 attempts.

"I've always had the power," Robert told MLB.com. "Nothing is really different, it's always been there. Last year, I didn't play too many games, and also I was dealing with the injuries and everything, but I think the home runs have come this year because of the contact I've been making. I've been making better contact.

"I adjusted my swing, but I don't think that's what's helped gain more power. It's more helped me gain more contact, better contact. ... The biggest difference was really just trying to get my swing out in front of home plate more, to make more out-front contact. It's helped me see the ball better, balls with more velocity and also with a lot of movement. It's been easier to stay in the zone and to stay on those pitches."

Robert popped out second base to begin the game, but cleared the left-field fence with a solo homer in the third. He flied out to right in his next at-bat, but extended the Knights' lead to 4-0 with his second solo blast of the game to left. He grounded out with a runner at third and one out in the eighth -- a rarity for the native of Havana, Cuba, who has batted .424 across 66 at-bats with runners in scoring position this season.

His rapid ascent to the top of the list of prospects might have come quicker than expected, but that won't alter the plan Robert has set for his journey to the Majors.

"I've gotten better at every aspect of the game," he told MLB.com. "Obviously the preparation and everything is a lot harder in Triple-A, so I'm a lot more prepared, but I think I've improved in every aspect, like any other player year to year, getting better."

Making his eighth appearance and sixth start for the Knights, Odrisamer Despaigne (4-4) picked up his first Minor League win since May 5 with Triple-A Louisville, although his stay was interrupted by a stint in the Majors. The 32-year-old scattered six hits over seven innings while striking out four.

One night after homering twice, Bo Bichette singled once in four at-bats to extend his hitting streak to six games. The top Blue Jays prospect has gone 9-for-22 in that span and is batting .309 in 51 games this season.

Buffalo's Ryan Feierabend (5-5) was charged with four runs -- three earned -- on 11 hits and a walk with one strikeout in six frames.