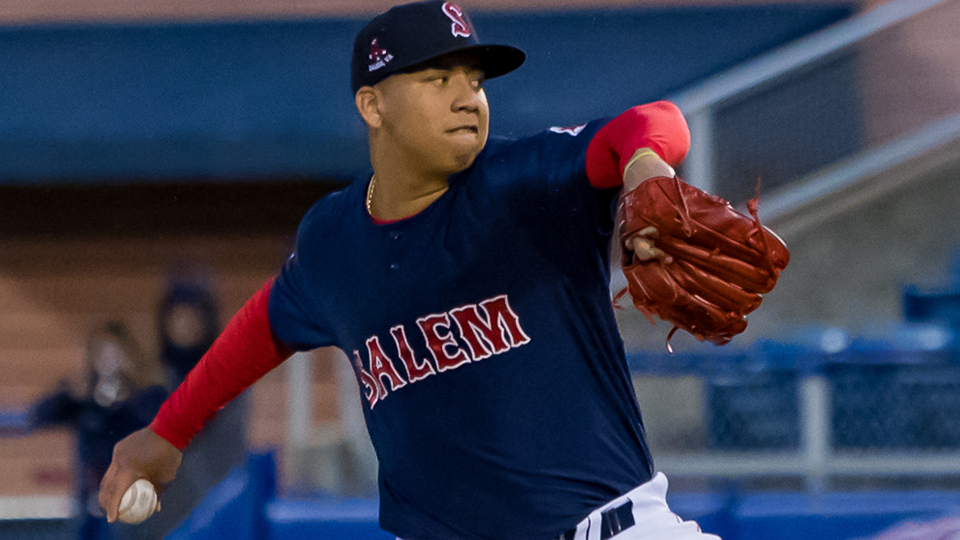 Bryan Mata was 6-3 with a 3.50 ERA in 17 starts in the Carolina League last season. (John Wacher/Salem Red Sox)

If Bryan Mata is feeling the effects from a right shoulder strain that sidelined him for a month, he isn't showing it.

The seventh-ranked Red Sox prospect allowed three hits and a walk while striking out five over six innings as Class A Advanced Salem edged Frederick, 1-0, in the first game of Friday's doubleheader at Haley Toyota Field.

After his May 4 start in Myrtle Beach, Mata missed a month. He returned on June 7 and blanked Carolina for five innings.

"He's really doing a good job of mixing his pitches right now and it's just good to see him healthy out there," Salem manager Corey Wimberly said. "He's pitching with an attitude and it's fun to see."

Cole Billingsley reached on an infield single to open Friday's game against Mata (2-1), but he retired the next six Keys. In the third, the 20-year-old worked around another leadoff infield knock by Yeltsin Gudino before sitting down six in a row.

"There were a couple of plays we could have made for him, which would have helped him out with the traffic a little bit," Wimberly said. "Only two walks, he filled up the strike zone. He mixed his pitches well and didn't get affected by a play here or there. He just kept his mind on the next guy up and that was good to see out of him."

After Jean Carrillo opened the fifth with a base hit to center field, becoming the first Keys batter to reach the outfield against Mata, the Venezuela native coaxed a double-play grounder from Sean Miller. Gudino walked but, following a mound visit, Mata got a groundout from Jake Ring. He worked around another two-out walk in the sixth to cap the outing and extend his scoreless streak to 11 innings.

Wimberly said holding out Mata for four weeks was done with the intent to err on the side of caution.

"Overall, our main goal is to look out for the player and his health," the manager said. "And, like I said, it was moreso precautionary over anything. It was really good to see him go and put in the work while he was down and actually learn some stuff and actually get better."

Through eight starts this season, Mata owns a 1.56 ERA, 0.97 WHIP and .171 opponents batting average -- all of which would lead the Carolina League if he had enough innings to qualify. Over 40 1/3 frames, he has 41 punchouts.

Mata's absence provided him with time to work with Salem pitching coach Lance Carter on how to use his pitches and have them play off of one another, which Wimberly feels is paying off in the game.

"I know he's really put an emphasis on that," he said. "Even when he wasn't playing, he was really engaged and watching the games and always talking with Lance and finding out different ways to attack hitters in certain counts. I think he's really a guy who really listens."

The skipper believes that Mata's primary goal is to stay healthy, especially considering he's already hit the injured list this season and dealt with back issues a year ago.

"It'll be good to see how much of a workload he can actually handle, so I think that's one of the things we're really focusing on moving forward," Wimberly said.

For a young hurler, taking care of the body is an important aspect in development.

"That's something that he's going to learn throughout his career, how to get ready for each start and how to prepare his body to get through a full season," Wimberly said.

Keith Curcio drove in the game's lone run with a sacrifice fly in the fourth.