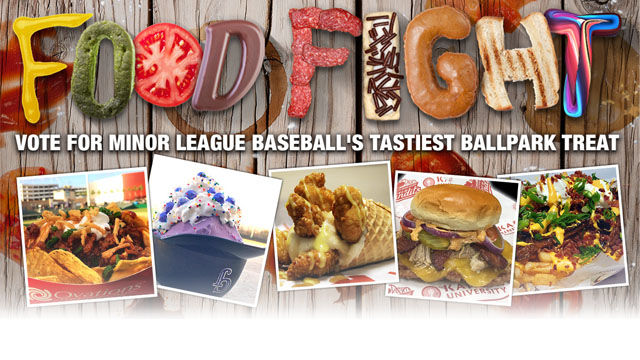 You're at the ballpark. It's the third inning. You're feeling kind of hungry. Time for dinner.

We can't send you the hot, crispy goodness of the "Porkzilla" or all the extra napkins you'll need for the Grilled Cheese Bacon Cheeseburger, but you can at least find a shady picnic table, grab a drink (maybe some water, you're trying to be healthy) and vote all night in MiLB.com's 2016 edition of Food Fight.

The Lakewood BlueClaws' Triple C crabcake sandwich took home the top prize in the last Food Fight back in 2014, edging more traditional, savory contenders like Round Rock's Grilled Cheese Hot Dog and Omaha's BBQ bacon burger. Baseball games are all about hot dogs and Cracker Jack, but in 2016, Minor League teams have taken traditional to a new level. Instead of the boring ballpark frank, fans can line up for Midland's Peanut Butter & Jelly & Bacon Hot Dog or Akron's Squealer -- a half-pound foot-long dog stuffed with pulled pork, cheese, wrapped in bacon and deep fried.

Yikes. And for the Cracker Jack purist, you can take a bite out of Pensacola's Cracker Jack Chicken and Waffles, which features "chicken tenderloins crusted in Cracker Jacks, vanilla butter-brushed waffles and maple honey mustard syrup."

Food Fight intends to showcase some of the Minors' unique stadium food options and give fans the opportunity to vote for their favorites. An endless supply of randomly selected match-ups will give you a chance to see some of the crazier and more delicious offerings cooked up by Minor League teams, with the goal of finding the best.

Fans can also take a photo of their items at a Minor League ballpark, post it to Instagram and include the hashtag #MiLBFoodFight and @MinorLeagues to be entered for a chance to win free tickets and a food voucher. And for those concerned about the caloric counts of Food Fight menu, rest assured the contestants in this year's contest are only a sliver of the menus being offered at stadiums -- Minor League teams have made a push in recent years to offer healthier items, vegetarian options and cuisine for the gluten-free and peanut-free crowds as well. New Hampshire was recognized by PETA as the Most Vegetarian-Friendly Ballpark in Minor League Baseball, but the Fisher Cats are also proudly rolling out their own version of "The Squealer" -- a gigantic sandwich shaped like a pig's face that includes bacon, ham, Italian sausage, pepperoni, pulled pork, cheddar cheese and BBQ sauce.

Waffles seem to be trendy in this year's Food Fight, with everything from new twists on chicken and waffles to dishes incorporating waffle cones and even waffle fries. You'll find no shortage of towering burgers, smothered hot dogs, loaded nachos and baseball helmets overflowing with everything from sprinkle-covered ice cream to jalapeno-topped chili.