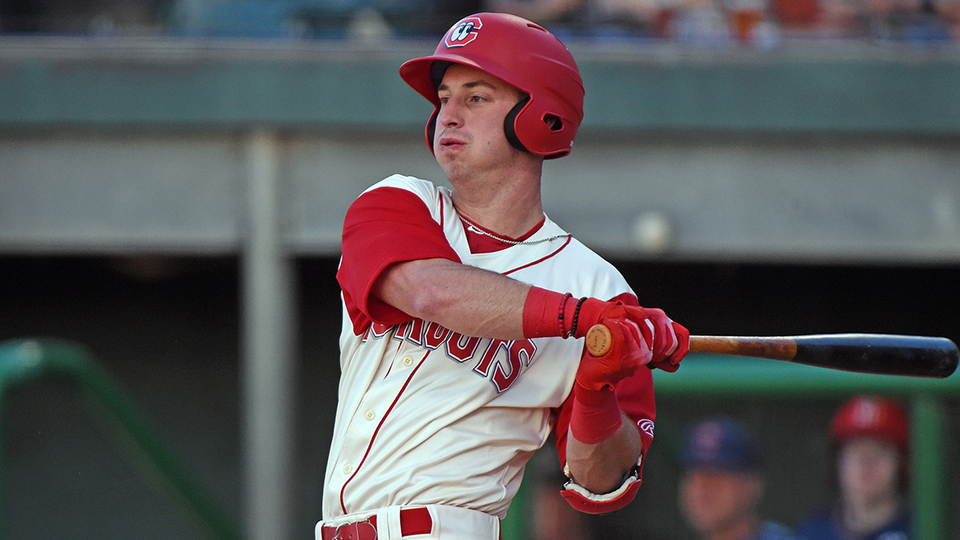 Brent Rooker is tied for sixth among all Minor Leaguers with 52 extra-base hits this season. (Brian McLeod/MiLB.com)

It took some time, but Brent Rooker seems to have passed the big test the Twins gave him at the beginning of the season. After an extremely hot week, he's even got a shiny new award to show for it.

The Twins' No. 7 prospect went 13-for-26 (.500) with three homers, two doubles and seven walks over seven games for Double-A Chattanooga to take home Southern League Offensive Players of the Week honors.

This is his first Player of the Week honor in that circuit. He won two Player of the Week awards in the Florida State League last season with Class A Advanced Fort Myers, where the Twins aggressively sent him to start 2017 after taking the former Mississippi State slugger 35th overall in that Draft. Minnesota stayed on that path by starting Rooker only two levels below the Majors in his first full season, and after he hit just .240 with a .693 OPS through May, he feels like he's done plenty of late to show he was worthy of the test.

"I'm willing to take on any challenge they're going to put in front of me," he said. "I feel like I've had a good handle on all the different types of tests they've given me so far, but at the same time, I'm just taking things one step at a time. If I continue to get opportunities, I'm going to continue doing what I've been doing all along, and that's not worrying about numbers, not getting ahead of myself, but focusing on putting together a professional at-bat every time and trying to help teammates."

Rooker's biggest performance came last Tuesday when he went 4-for-5 with a homer, double, four RBIs and a walk in a 10-8 loss at home to Pensacola, but he was pretty consistent throughout his award-winning week. He collected multiple hits in five of his seven games and led the Southern League with his .500 average, .606 on-base percentage, 13 hits and 24 total bases during the July 23-29 window.

As explosive as those numbers were, this hot run isn't an entirely new phenomenon for the right-handed-hitting slugger. Since June 1, Rooker is batting .313/.398/.627 with 13 homers in 51 games with the Lookouts. His 1.025 OPS is highest among Double-A hitters over that span, and his 34 extra-base hits are most among all full-season Minor Leaguers. That's similar to the level of dominance he showed in his final collegiate season, when he hit .387 with 23 homers as a red-shirt junior in 2017, but after some struggles in April and May, Rooker admitted he needed some reminding from teammates like Nick Gordon and Andy Wilkins -- both now with Triple-A Rochester -- that his natural ability, specifically his plus power, would get him over the hump.

"Those first months obviously didn't go the way I wanted, and it can get frustrating," Rooker said. "But it helped to have good people around me and encouraging me. Struggles are going to happen, but if I stuck to my routines and my work ethic, the real me would come through. ... [Gordon] had been at Double-A all last year, and he told me people are always going to be watching but that you can't let outside things affect the way I try to play. So I've tried to just be myself the whole time, instead of worrying about all that."

If there was a major change for Rooker last week, it was the jump in his walk rate. The first baseman/outfielder took a free pass in seven of his 33 plate appearances while striking out in only three of them. Put another way, 18.4 percent of his 38 walks from the season as a whole came last week alone. With Rooker struggling to control the strike zone early on -- he had a K/BB ratio of 27/2 in April -- this level of plate discipline might have been the last box the Twins needed him to tick before giving him a late-season look at Rochester. Then again, Rooker knows that part of his game, like everything else that has shined through recently, has been there all along.

"Obviously, I saw the ball really well last week, but it wasn't a conscious thing I was trying to change," he said. "It's all been about trusting myself, trusting the work I put in every day to get better. Yeah, there are times I'm going to get beat, but I don't have a choice other than to get better. It's improve or get lost around here, so I'll keep working to improve like I always have."

Below is the complete list of Minor League Pitchers of the Week for July 23-29: