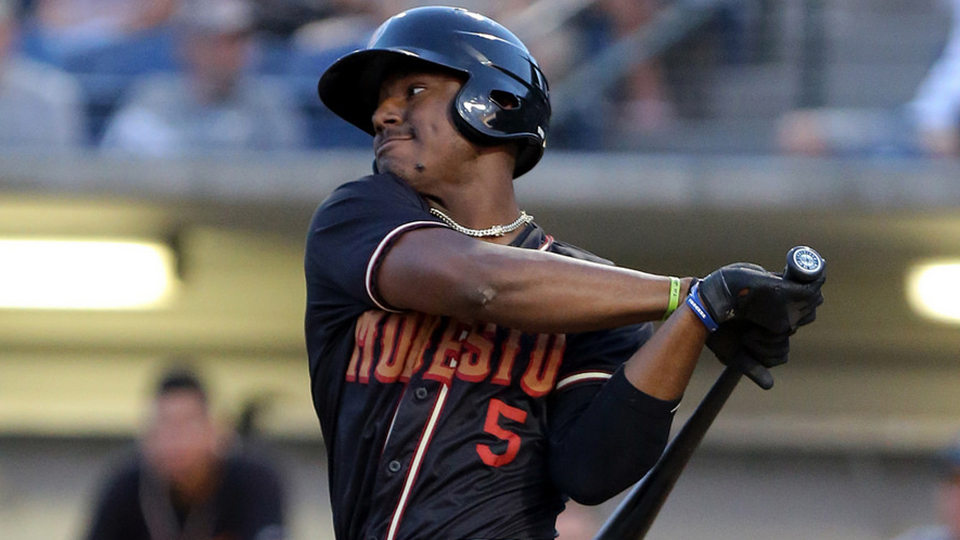 Want to see a hitting competition?: The offense got going early on Wednesday when Brewers No. 6 prospect Corey Ray homered three times for Double-A Biloxi. Then, the International and Pacific Coast League offenses kept it going by combining for 19 runs and 29 hits at the Triple-A All-Star Game in Columbus. But things took a turn when the Eastern League All-Star Game was also defined by offense, albeit of a different sort. After the Eastern and Western Divisions finished tied 4-4 after nine innings, the Double-A exhibition was decided by a two-minute, one-on-one, points-based hitting competition between representatives from the two sides. Altoona's Will Craig defeated Reading's Zach Green, 305-275, to give the Western Division the win. It was a silly but fun way to decide a game that didn't need a winner.

Yankees RHP Garrett Whitlock, Class A Advanced Tampa: 7 IP, 2 H, 1 R, 1 ER, 2 BB, 8 K, 91 pitches, 66 strikes -- This is how 18th-round picks become top-30 prospects one year later. Whitlock, whom the Yankees took 542nd overall in 2017 out of the University of Alabama-Birmingham, continued one of the best pitching seasons in the Minors with his latest gem in a 2-1 loss at Jupiter. The Yankees' No. 26 prospect now has a 1.90 ERA and 1.12 WHIP with 54 strikeouts in 47 1/3 innings since joining the Florida State League club on May 14. Combined with his time at Class A Charleston, he ranks fourth among full-season Minor Leaguers with a 1.55 ERA over 87 1/3 innings and is ninth with a 0.95 WHIP. Because he's struck out 98 and allowed only one homer, he also leads all Minor Leaguers who have pitched at least 70 innings with a 2.23 FIP. Whitlock has a mid-90s fastball, above-average breaking ball and impressive control, and while the Yankees haven't exactly been aggressive with him out of college, he deserves plenty of points for beating expectations.

Mariners OF Kyle Lewis, Class A Advanced Modesto: 3-for-5, 3 2B, 3 RBI, R -- Lewis is headed to Washington this weekend as the Mariners' lone representative at the Futures Game, but the invitation owes more to potential than performance. The 2016 first-rounder has dealt with multiple knee injuries over the past two years and is back in the California League for the second straight season. Lewis is hitting .270/.312/.449 with five homers and 18 doubles in 46 games with Modesto this year -- a far cry from the numbers he put up in college at Mercer. His performance at Visalia marked just the second time this season that he collected three or more hits, and all three of those knocks were doubles. Lewis can still show plus power and has a good arm that profiles anywhere in the outfield, and this game -- he also added an outfield assist on a play at the plate -- was a good reminder of his capabilities.

Marlins OF John Norwood, Double-A Jacksonville: 4-for-5, 2 HR, 3 RBI, 2 R -- The Marlins' No. 30 prospect, who went undrafted out of Vanderbilt in 2014, has shown solid pop in the past -- he went deep 19 times in his first trip to the Southern League last season. That particular tool hadn't quite shown up in 2018 ... until Wednesday. The right-handed slugger homered twice in a game for the first time since June 6, 2015 (with Class A Greensboro) to help lead Jacksonville to an 8-1 win. Norwood began the day with only three homers in his first 83 games of the season and is now hitting .261/.317/.365.

Dakota Hudson vs. Francisco Mejia: This might not be the last time these two see each other in a big exhibition. Hudson and Mejia have both been selected to participate in the Futures Game this Sunday in Washington, but first, the Memphis right-hander and Columbus catcher/outfielder squared off in the Triple-A All-Star Game at Mejia's home park. The Indians' top prospect took a wicked cut on a foul ball the other way to left on the first pitch he saw and two pitches later hit a sharp liner to center for the IL's first knock of the game. That's very in character for Mejia, who has hit .397 over 32 games since the start of June. Interestingly, he started the game in right field, where he's played only six games this season. It remains to be seen what position he'll play Sunday -- he's listed under the catching group, for whatever that's worth -- and how Hudson will pitch him in a potential rematch.

Twins SS Royce Lewis, Class A Cedar Rapids: 2-for-5, HR, 2 RBI, R -- The top Twins prospect's weakest offensive tool is his power, but he showed some pop by homering to center in Cedar Rapids' 8-4 loss to Fort Wayne. It was the ninth homer through 73 games for last year's No. 1 overall pick. Lewis has been one of the most consistent batters in the Midwest League this season, posting an average above .300 in each of the four months, and he's been particularly hot since the Midwest League All-Star Game -- he's batted .379/.455/.621 with 10 extra-base hits and an even 10/10 K/BB ratio in 18 games. His .319 average on the season ranks third in the circuit. Lewis just turned 19 last month, but the Twins have been aggressive with him in the past, sending him to Cedar Rapids last August just two months after he signed out of high school. The Florida State League could be next.

Video: Kernels' Lewis hits it out