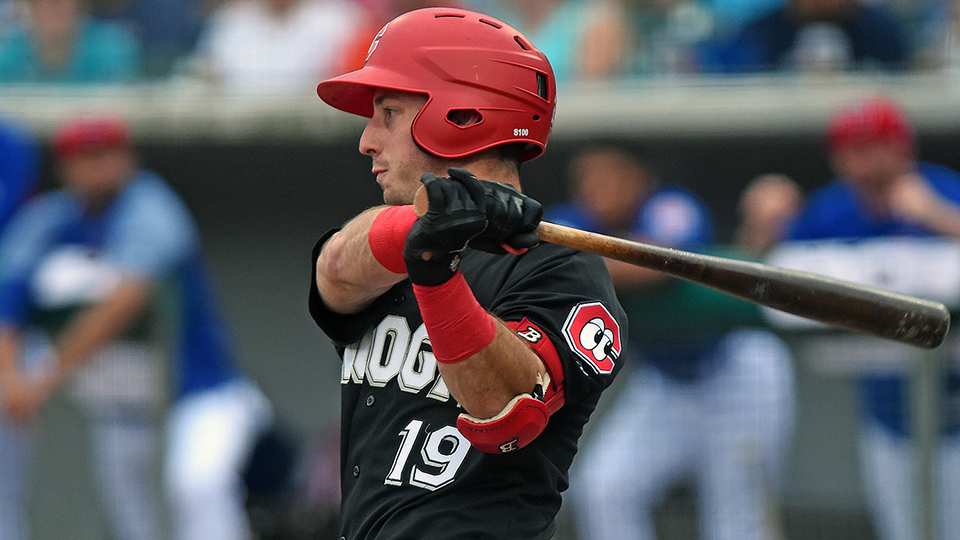 Big names doing big things at Triple-A: Triple-A was the place to be Tuesday. No. 72 overall prospect Stephen Gonsalves tossed seven scoreless innings to stay hot on the mound for Rochester. No. 50 prospect Tyler O'Neill followed up his three-homer game over the weekend with two more dingers in Memphis' game at Salt Lake. Former top-100 prospect Jorge Mateo broke out of his funk with Nashville by collecting four hits, two of which were triples.

Twins 1B/OF Brent Rooker, Double-A Chattanooga: 4-for-5, HR, 4 RBI, R, B -- The Twins' No. 7 prospect hit his fourth homer in his last six games and reached base five times for the first time this season in Chattanooga's 10-8 loss to Pensacola. In 46 games since June 1, Rooker is hitting .306/.388/.628 with 12 homers, three triples and 17 doubles. Those 32 extra-base hits are most among all Double-A hitters in that span. After taking Rooker 35th overall out of Mississippi State last year, the Twins pushed the 23-year-old to the Southern League in his first full season, and after a slow start, he's found a higher gear. His defensive position still remains up in the air, but his bat should get him to the Majors by next season.

Royals LHP Foster Griffin, Double-A Northwest Arkansas: 6 1/3 IP, 2 H, 0 R, 1 BB, 3 K, 74 pitches, 45 strikes -- It would have been fun to see how deep the Royals' No. 9 prospect could have gone if he weren't relieving a rehabbing Blaine Boyer (who faced the first three batters of the game) -- and if he weren't pitching in a seven-inning game. As it stood, this efficient gem was his first scoreless appearance since June 11 and saw him lower his Texas League ERA from 5.99 to 5.66. That's fourth-highest among Texas League qualifiers, and his 4.25 FIP and 1.54 WHIP aren't much better. Griffin isn't a high-velocity pitcher, so he has to rely on off-speed stuff to be effective.

Jorge Guzman vs. Royce Lewis, Alex Kirilloff: One of the Minors' biggest fireballers took on the Twins' No. 1 and 3 prospects with mixed results in Jupiter's 4-1 loss to Fort Myers. The 22-year-old Guzman struck out Lewis twice and walked him once but couldn't manage to retire Kirilloff, giving up a single to the Miracle outfielder in the second inning and walking him in the fourth. Kirilloff later scored on a two-run homer by Travis Blankenhorn as one of the only two tallies given up by the Marlins' No. 3 prospect in his five frames. Guzman finished with nine strikeouts, his highest total since fanning 10 on June 11.