Prospect Roundup: Games of May 21 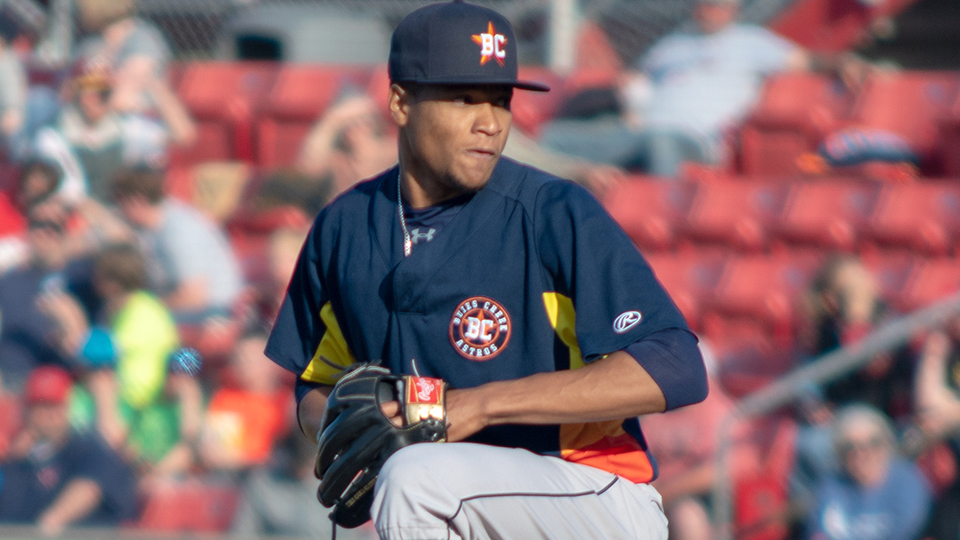 Jorge Alcala has held opposing batters to a .185 average though 33 2/3 innings this season. (Joe Dwyer/MiLB.com)

Brought to you by the letter K: Angels' No. 11 prospect Jose Suarez set the tone for the day when he struck out 11 in five innings for Double-A Mobile, moving into the Minor League lead with 69 strikeouts in 38 2/3 innings. But he wasn't the only one to string together a bunch of strikeouts. Austin Warner, an undrafted player signed by the Cardinals last June, fanned 10 in a nine-inning shutout for Class A Advanced Palm Beach. Astros prospect Cristian Javier punched out nine over just four innings for Class A Quad Cities. Other K-heavy performances by Austin Gomber and Jorge Alcala are featured below.

Astros RHP Jorge Alcala, Class A Advanced Buies Creek: 4 IP, 1 H, 0 R, 1 BB, 7 K, 64 pitches, 40 strikes -- The Astros' No. 7 prospect faced 14 Winston-Salem batters in his piggyback role as a reliever Monday. Half of them walked back to the dugout without putting a ball in play. No matter whether he's starting or relieving, Alcala hasn't allowed more than two earned runs in any of his last seven outings. In May alone, the 22-year-old right-hander has a 2.25 ERA and 0.88 WHIP with 21 strikeouts and six walks over 16 innings. His 30.9 strikeout percentage on the season ranks fourth among the 48 Carolina League pitchers with at least 30 innings. Armed with a fastball that can hit the upper-90s, Alcala's improved command has him piling up the strikeouts.

Cardinals LHP Austin Gomber, Triple-A Memphis: 8 IP, 6 H, 1 R, 1 ER, 2 BB, 9 K, 110 pitches, 72 strikes -- The Cards intend to use Alex Reyes as a Major League starter when he completes his rehab from Tommy John surgery. And who could blame them? Reyes has looked fantastic so far in his rehab outings, striking out 31 over 16 scoreless innings at three different stops. That's bad news, however, for Gomber, who is still awaiting his Major League debut despite being called up from April 29 to May 4. The Cardinals' No. 11 prospect had allowed 14 earned runs in his previous three starts, causing his ERA to swell from 2.45 to 4.61. He responded Monday with his second eight-inning outing of the season -- the other being his 16-strikeout effort on April 23.

Red Sox RHP Tanner Houck, Class A Advanced Salem: 6 IP, 5 H, 1 R, 1 ER, 3 BB, 0 K, 69 pitches, 45 strikes -- This was the first quality start in eight outings for the No. 3 Red Sox prospect, who saw his ERA drop from 6.00 to 5.25 after Monday's gem in Frederick. Having a good outing wasn't unexpected, but the way in which the 2017 first-rounder out of Missouri got it done was a bit of a surprise. Houck didn't strike out a single Key, instead pitching efficiently to contact, and needed only 69 pitches to get through his six frames. The fact that his previous season high was only 5 1/3 innings was probably the only reason Houck didn't go for the seventh. It's not that the 21-year-old right-hander is incapable of racking up the K's -- he fanned nine over 5 1/3 innings just two starts ago. But one has to wonder if filling up the zone and pitching to contact will be the strategy going forward for a pitcher who has two above-average pitches (fastball, slider) but has walked 25 in 36 innings this season.

Albert Abreu vs. Jesus Sanchez: The Yankees' No. 4 prospect seemed to be settling in with Class A Advanced Tampa after missing the start of the season due to an offseason appendectomy, but he got a big wakeup call Monday. Abreu allowed four hits over his four innings against Charlotte, and all four were home runs. One of those -- a two-run long ball to right in the fourth inning -- came off the bat of Sanchez, his sixth homer in 37 games this season. Abreu, who also struck out Sanchez in the first inning, finished with seven earned runs allowed on the four hits and two walks in four frames, causing his ERA to jump from 2.13 to 5.40. The Rays' No. 4 prospect finished 2-for-5 in the Stone Crabs' 12-9 win and is now hitting .353/.367/.549 in a circuit not known for its offense. Typically, this would be a fun matchup between MLB.com's No. 53 and 69 overall prospects, but the latter just wasn't on his game Monday.

Rays SS Willy Adames, Triple-A Durham: 2-for-5, HR, 2 RBI, R, 2 K -- MLB.com's No. 22 overall prospect has done plenty to prove he belongs in the Majors. He's hitting .311/.387/.466 in his first 40 games back with Durham, showing growth in all offensive areas after producing a .277/.360/.415 in 130 games last season. The only nit that could be picked was a lack of power, but he answered that by going deep Monday for his first homer since May 2 and his fourth of the season. Unfortunately for Adames, the Rays just don't have an opening at shortstop right now. Adeiny Hechavarria owned the position until a hamstring injury placed him on the disabled list, but he was then replaced by arguably the club's best hitter this season in Daniel Robertson. Adames has some experience at second base but has yet to play there this season. It might take another injury, a midseason trade or an incredible hot streak for Tampa Bay to push its No. 2 prospect, but right now, he's answering as many questions as he can with Durham.

White Sox OF Eloy Jimenez, Double-A Birmingham: 1-for-4, HR, RBI, R, 2 K -- Jimenez's long ball ended a stretch of 11 straight games without a homer. The top White Sox prospect still ranks second in the Southern League with eight dingers in 31 games and leads the circuit with a .608 slugging percentage.

Royals 1B Nick Pratto, Class A Lexington: 3-for-5, 2B, 3 RBI, 3 R, BB, K, SB -- MJ Melendez was the focus in Lexington's 18-2 win over Rome and rightfully so, but don't sleep on the Royals' No. 2 prospect. Pratto matched his season high with three hits in the rout, a total he'd collected in four previous games as well. With his stolen base, the 19-year-old first baseman almost has many steals (five) as homers (six) through 38 games.