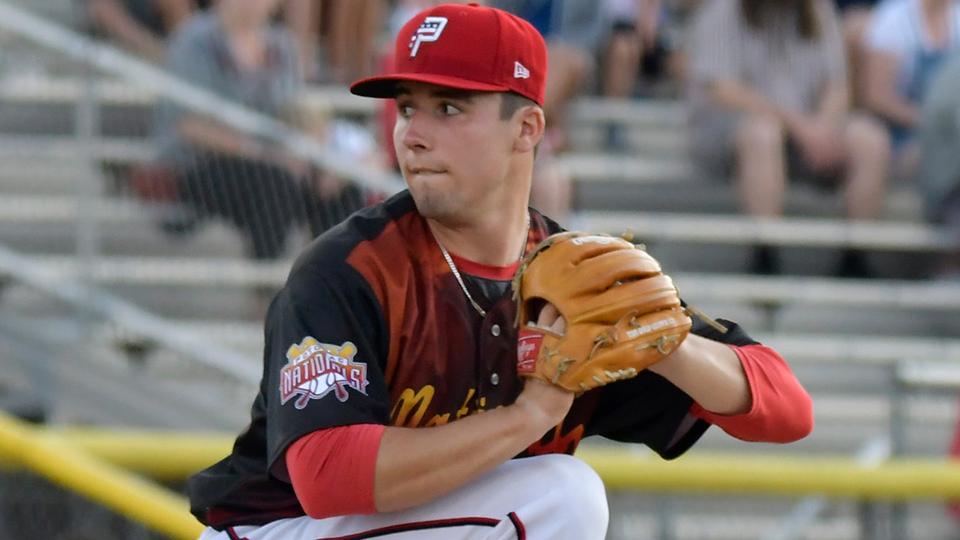 Tim Cate was introduced to pressure-packed, season-hanging-in-the-balance moments during his freshman season at the University of Connecticut, and those intense games continued throughout his three seasons on campus.

The Huskies were perennial contenders to win the American Athletic Conference and advance to regional play, and Cate was asked to toe the rubber and deliver in crunch-time situations.

It's no different for the 21-year-old left-hander in his first full season in the Nationals organization. Washington's No. 6 prospect hasn't missed a beat as a member of Class A Advanced Potomac's starting rotation, with four quality starts and four victories in his last seven outings to help the P-Nats stay in the thick of the Carolina League Northern Division second-half standings.

"Obviously it's a great feeling. There are games where it feels like you don't have your best stuff, but it's still a good feeling knowing that you give it your best shot and your team still has an opportunity to win," said Cate, a second-round selection in the 2018 Draft. "I think all our pitchers have been doing that for the past month. We've been playing really well and it feels good to be part of something bigger than yourself, where you go out and give it your best and then you know the next four days the guys behind you are going to do it as well. Then it rolls back over to you and it continues. The whole team's been playing well and there's been good energy. It's fun to be a part of that for sure."

Cate was 14-8 with a 2.99 ERA in his three seasons with UConn. He garnered Louisville Slugger Freshman All-American honors in 2016, set the program record with 270 career strikeouts and won three times in postseason play (twice in regional competition).

He's carried that big-game mentality into the professional ranks. The Manchester, Connecticut, native has been strong in his last five starts with Potomac, posting a 3-1 record and allowing three earned runs or less four times, helping the P-Nationals to keep pace with first-place Salem.

"I would say I've met my expectations for how I would feel, but I wouldn't say I'm satisfied," Cate said. "As I get older, I'm going to have to be able to go even deeper, and the goal is to make it to the bigs. There you've got to go into October. It's my first full year [of professional baseball]. I'm happy how it's gone so far, but definitely not satisfied."

Cate's 118 1/3 innings pitched so far this season are the most he's ever thrown in a one-year span. He eclipsed the 100-inning mark last year when he threw a combined 104 2/3 frames spanning his junior season at UConn and stints at Class A Short Season Auburn and Hagerstown.

The recent performances -- a 2-0 mark with 16 strikeouts and six earned runs allowed in his last three starts spanning 17 innings -- have proved to him that he has the build and endurance to continue pitching at a high level deep into the season.

"Accumulating this amount of innings in one year is different for me," he said. "It's toward the end of the season and you've really just got to push through it and fight off a lot of that soreness and tiredness and get good rest, eat well and continue to work hard. It's definitely a grind more than I'm used to.

"It's been something that, I wouldn't say it's difficult, but it's definitely different and it took a lot of adapting to get used to. I think my body is feeling good. It's just another month and a half, and I'm hoping that I'll be able to eat up a few more innings and hopefully we'll make a postseason push and fight for a championship."

Cate has worked with P-Nats pitching coach Sam Narron on developing a two-seam fastball and a changeup to complement his fastball and curve. Cate said the development of a sinker is to help get more pitches lower in the zone for quicker outs, and he wants his changeup to become a prominent part of his repertoire when hitters are sitting fastball.

"Both pitches are designed to help me go deeper into the game, for sure," he said, "and take a lot of stress off of my four-seam fastball and my curveball."

Back to the pen: Justin Garza had been a member of the starting rotation since being promoted to Lynchburg at the beginning of the 2018 season. He made 36 straight starts before being shifted back to the bullpen at the beginning of August. The move has paid dividends for the Hillcats. Garza has allowed five hits over 11 scoreless innings in his last three appearances, and he picked up his first save since Aug. 18, 2017 (for Class A Lake County) with three scoreless innings Sunday at Potomac. The right-hander is 4-for-4 in save opportunities in his career.

Hometown flavor: Delaware native Tyler Hill has bounced between four different organizations since being drafted in 2014 and finally landed with the Wilmington Blue Rocks -- and he's taken advantage of the opportunity. Signed by the Royals on Friday after being released by the Yankees, the 23-year-old has eight hits in his first 11 at-bats in three games with the Blue Rocks. He drove in three runs, highlighted by a solo homer in his first at-bat with Wilmington.

Finally clicking: Salem has rocketed to the top of the Northern Division second-half standings, and Pedro Castellanos has been in the middle of the winning ways. The 6-foot-3 first baseman, in his first season at the Class A Advanced level, has rattled off 14 extra-base hits and driven in 28 runs in the second half. Six of his seven homers this season have come in the second half, and five of those long balls have come since July 27.

Damien Sordelett is a contributor to MiLB.com. This story was not subject to the approval of the National Association of Professional Baseball Leagues or its clubs.