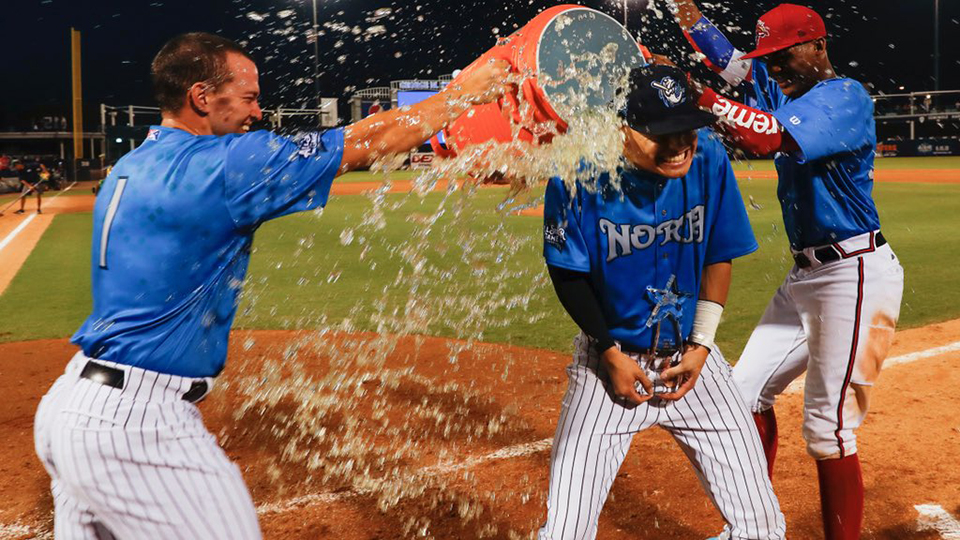 Diego Castillo has enjoyed hitting at his home ballpark this season.

At the Florida State League All-Star Game on Saturday, the Yankees prospect knocked a pair of doubles on his way to earning BUSH'S® Best All-Star MVP honors as the North Division blanked the South, 5-0, at George M. Steinbrenner Field.

"It was a really good experience for me in my life and my career," Castillo said. "To win the MVP, I'm so happy about it."

Castillo has hit more than 50 points higher at home (.286) than on the road for the Tampa Tarpons, and he opened the scoring for the North on by driving a ground-rule double to right field in the second inning. The 20-year-old pulled another double to the wall in left-center in the fourth, going 2-for-4 as the North came out on top for the third consecutive year.

"I was just enjoying the game," Castillo said. "Every at-bat, every inning."

Austin Listi of the Clearwater Threshers drove in three of the North's five runs with a pair of singles as the designated hitter.

Listi was down in the count against Fort Myers Miracle lefty Andrew Vasquez in the third inning, but pushed a two-strike fastball the opposite way to plate Reds No. 3 prospect Taylor Trammell of the Daytona Tortugas.

"I was kind of chasing stuff down a little bit today," Listi said, "just waiting to see something up and get a good pitch to hit. And I put a good swing on it."

The 24-year-old was one of the league's top hitters in the first half, batting .344 with nine homers and 16 doubles on his way to an All-Star appearance in his first full professional season.

"It's awesome," Listi said. "I'm honored, I'm humbled to be able to do it. All glory to God for allowing me to be here."

Tarpons right-hander Nick Green earned the nod as the starting pitcher for the North, and the league's ERA leader did not disappoint. He set down all three batters he faced, striking out Lucius Fox of the Charlotte Stone Crabs to start the game.

"It felt really good, I loved it," Green said. "I saw a couple guys that I know in the stands. I love having [this fanbase], it's awesome."

All 11 active pitchers on the North roster took part in the four-hit shutout. Lakeland Flying Tigers righty Alfred Gutierrez struck out the side in the sixth with a fastball that reached 95 mph.

Daytona's Mitch Nay was 2-for-2 with a pair of singles, starting the game at third base for the North. The 24-year-old has taken full advantage of his second go-around in the FSL after injuries limited him to fewer than 70 games over the last two years.

"Since the last time I played in this league, it's been a little while and I had a lot of tough breaks with injuries," he said. "But just to be healthy again and play well enough to be selected to this, it's really been awesome."

Omar Malave headed up the squad of the North Division, stepping in for current Dunedin Blue Jays manager Casey Candaele.

"I've been with the Blue Jays for 38 years, managing every level, so I had the opportunity to manage in a lot of All-Star games," Malave said. "When I found out I'd do it again here, it was a great honor just to be a part of it with these guys.

"It's a dream come true for them, also for me. That was what my meeting was with them today -- just respect the game, play a good game, and that's what they did."

For the South, Fort Myers' Jaylin Davis reached twice with a walk and an infield single, while Miracle teammate Lewin Diaz doubled.