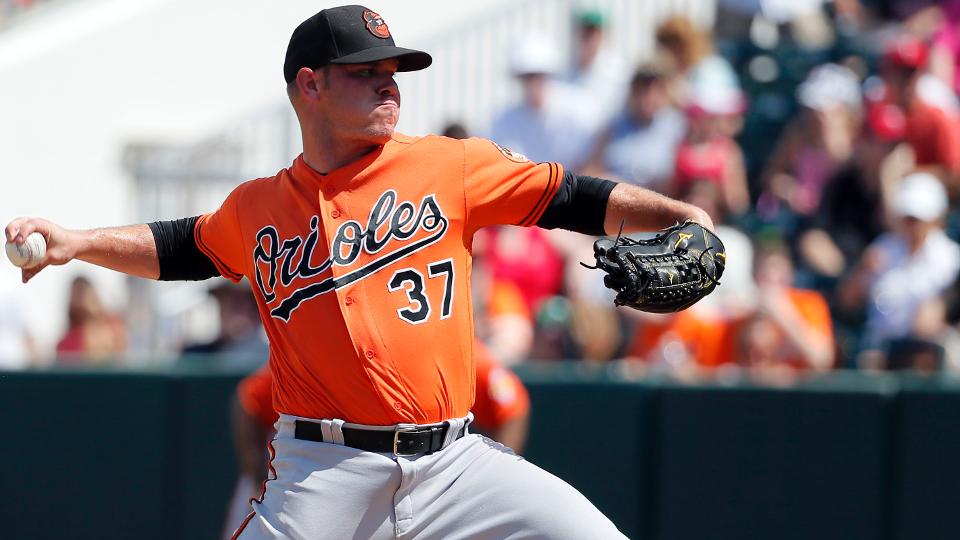 At the crossroads: Dylan Bundy, RHP

Back in 2012, Bundy was MLB.com's highest-ranked pitching prospect. This year, the right-hander didn't make the cut for the Top 100. The Tulsa, Oklahoma native dealt with a laundry list of injuries over the past three seasons and has been limited to only 17 Minor League games since undergoing Tommy John surgery in 2013.

The wrinkle in the Bundy saga is that the Orioles signed him to a Major League deal when they took him fourth overall in 2011 and he is out of Minor League options. Therefore, if Bundy is healthy when camp breaks, Baltimore must carry him on the 25-man roster or run the risk of losing him to waivers.

Orioles director of player development Brian Graham has been very encouraged by the progress of their No. 2 prospect. "He's having a great spring," Graham said. "He's adjusted well and is throwing all of his pitches for strikes."

Bundy's contract conundrum will almost certainly land him in the O's bullpen, but that doesn't mean Baltimore plans on keeping him there long. Graham said the plan is to get some innings under Bundy's belt in the beginning of the season before increasing his workload.

One can't blame the Orioles if they think their pitching prospects are a bit jinxed. Harvey, Baltimore's No. 1 prospect, also has dealt with a slew of injuries. The club's lone player on MLB.com's Top 100 Prospects hasn't thrown a professional pitch since July 2014.

When he's been healthy, Harvey's shown promise. He cruised in his first pro season, posting a 1.78 ERA and striking out 33 in 25 1/3 innings between the Rookie-level Gulf Coast League Orioles and Class A Short Season Aberdeen. His sophomore season with Class A Delmarva was cut short after 17 games due to an elbow injury. Prior to that, Harvey had a 7-5 record in 17 starts for the Shorebirds. Since then, it's been nothing but bad luck for the Catawba, North Carolina native.

Harvey broke his fibula last spring when he was struck by a comebacker. As he neared a return from the injury, he was dealt another setback when he felt some tightness in his right arm and was shut down for the season. Then in October, Dr. James Andrews prescribed even more rest.

The Orioles hoped that would help get their top prospect back on track this spring. And early on, Graham was pleased with what he's saw from the right-hander. "Hunter's been excellent so far," he said recently. "The velocity is up on his fastball and he is throwing his curveball and his changeup for strikes."

Things looked to be moving along swimmingly for the former first-rounder until Harvey strained his groin during an instraquad game on Tuesday. According to MLB.com's Brittany Ghiroli, he's listed as day-to-day and Baltimore plans to treat the latest setback with extra caution.

Right now, the Orioles would be pleased to see the 21-year-old get through a full season without injury. "When you have a pitcher with [Harvey's] makeup, it's a special thing," Graham said. "If he stays healthy, he could do something really great."

A few years ago, Givens was toiling away as a light-hitting shortstop prospect. Fast forward to 2016 and the right-hander is on the verge of catching on in "The Show" as a relief pitcher.

Givens throws from a very low arm angle with good velocity and control. The 2009 second-round pick excelled for Double-A Bowie in 2015, posting a 1.73 ERA and a 0.94 WHIP in 35 games for the Baysox.

When the Orioles traded Tommy Hunter to the Cubs on July 31, the team called up Givens and he responded by notching his first Major League victory that night. Givens posted a 2-0 record with a 1.80 ERA in 22 games with the big league club.

Last year, Drake and Givens jointly received Jim Palmer Minor League Pitcher of the Year award. Drake captured that prize thanks in large part to his forkball. The 2008 second-round pick uses his signature pitch (which is sometimes labeled a split-finger fastball) to set up his fastball.

The product of the U.S. Naval Academy has dealt with his fair share of adversity since being drafted in 2008. Shoulder surgery derailed what looked to be a breakout year for the right-hander in 2012, and it took a few years to get his stuff back to where it was before the injury.

When Spring Training broke last year, Drake was anointed closer for Triple-A Norfolk and excelled in the role. The Worcester, Massachusetts native converted all 23 of his save opportunites for the Tides and posted a 0.89 WHIP. Baltimore's No. 22 prospect made it all the way to the Major Leagues last season, posting a 2.87 ERA in 13 appearances and striking out 17 in 15 2/3 innings.

Heinrich would like to ultimately become part of an exclusive list of big leaguers that includes the likes of Shawn Chacon, Josh Phelps, and Chad Bentz. That's because Heinrich also was born in Alaska.

The 19-year-old got his first taste of professional baseball with the Gulf Coast League Orioles after being drafted in the fifth round of the 2015 Draft. He hit .270 with two home runs in 45 games.

According to Graham has been impressed by Heinrich's poise in his first camp this spring. "It takes a lot of work for any player going to Spring Training for the first time," Graham said. "He's handling it very well."

The Orioles expect Heinrich to provide power, and the club would like to see him develop some pop in his first full season as a pro. He was drafted as a first baseman, but there is a good chance that he will eventually end up playing in the outfield.

More to keep an eye on: Trey Mancini captured the organization's Minor League Player of the Year award last season by hitting a combined .341/.375/.563 with 21 home runs, six triples, 43 doubles and 89 RBIs in 136 games between Double-A Bowie and Class A Advanced Frederick. ... Mancini's great year puts pressure on fellow first-base prospect Christian Walker. Walker came into 2015 as the organization's top prospect at first base, but that may not be the case going forward. ... Nineteen-year-old Jomar Reyes could develop into the Orioles' top prospect in 2017. The young third baseman performed well for Class A Delmarva last season, hitting .278 with 27 doubles and five home runs. ... Chance Sisco has been growing into an offensively inclined catcher with impressive plate discipline. The 21-year-old sports a .402 on-base percentage in his first three professional seasons.

Michael Leboff is a contributor to MiLB.com This story was not subject to the approval of the National Association of Professional Baseball Leagues or its clubs.